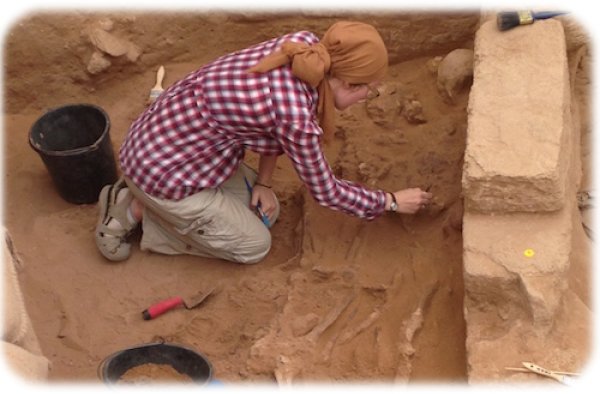 A remarkable discovery was recently unveiled. An archeological team has been secretly excavating a Philistine cemetery at the ancient city of Ashkelon for several years and is only now beginning to reveal its findings about the Philistines, who are mentioned often in biblical narratives during the time of the Judges and Israelite kingdoms. Below are four links with varied perspectives on this discovery.

It is generally thought that the Philistines migrated to the southern Levant from Crete, the Aegean region or Anatolia. The excavations’ findings generally support this thesis. Jeremiah 47:4 relates the Philistines came from “Caphtor” which is often associated with Crete. The excavations may reveal what was the original homeland of the Philistines. Did they migrate to the southern Levant via Crete or did they migrate from an Aegean location via Crete? Hopefully, the answer to this and many other questions will be forthcoming as the site’s artifacts and skeletons are examined. One of the links below says the excavation reveals the Philistines were a “peaceful” civilization, but that contradicts with the histories that we have of them. They often fought wars against the Israelites as recorded in the Bible’s accounts and they are also recorded as fighting wars with the Egyptians. The Philistine giant, Goliath, is famous for his defeat at the hands of the young David in one of the many Israelite-Philistine wars (I Samuel 17). The legendary Israelite hero, Samson, killed many Philistines in combat, including 1,000 Philistines in just one encounter with the jawbone of a donkey (Judges 15:14-15).

It is hard to form a comprehensive picture of the ancient Philistines from one cemetery in just one of their cities. For example, was this mostly a civilian cemetery while war-dead were interred elsewhere? After all, Western nations are full of civilian cemeteries while military dead are buried in dedicated military sites. Ancient civilizations could have had the same custom. At this point, we are dealing with a lot of informed speculations.

The first link notes that while there are many adult skeletons interred at the excavated cemetery, there are few children’s skeletons. Why was there such a lack of infant and small children’s skeletons? I have a possible explanation for that question. The Bible records that many of the civilizations living around the ancient Israelites included infant- and child-sacrifice as part of their idolatrous religions. If the Philistines practiced that same pernicious rite, then the bodies of many infants and small children would have been burned to ashes (i.e. “cremation”) in the bellies of Baal idols or in some other manner in “honor” of Molech or Dagon–the Philistine deity. Perhaps the excavations will shed some secular light on this question, or they may not.

I’ll close with a small sidebar to this story. Zephaniah 2:1-9 is the famous biblical prophecy which foretold that the Jews (“Judah”) in the latter days would again have an independent nation in the old Promised Land. That prophecy was fulfilled in 1948. This prophecy includes the specific information that the latter-day Jewish state would include the “seacoast” region of the old Promised Land and also the region of the ancient city of Ashkelon (verses 6-7). The modern Jewish nation included both these specific geographical locations when the state was formed in 1948. Ashkelon is where the Philistine cemetery is being excavated. If Ashkelon had not been within the borders of the modern Jewish nation, I doubt that this excavation would have ever occurred.