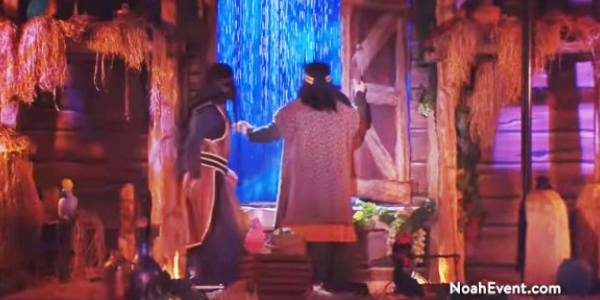 This post is to alert readers to a new movie which will have a limited release during April 9-13 of this year. I just found out about this new movie, which looks quite impressive and well worth seeing. The trailer for the movie is in the link below as well as a second segment which shows additional scenes from the movie. This movie tells the story of Noah and the Ark by presenting a live theater performance as a movie. The trailer shows actors, animals, and even birds all on the stage together. In the two segments, I saw horses, llamas, camels, birds and even a giant tortoise on stage with the actors. The closing scene presented in the trailer presents one of the biggest stage scene sets I’ve ever seen in my life.

The movie appears to be faithful to two aspects of biblical accounts of the Flood. It depicts Noah trying to warn a ruler of his time about the impending disaster, which had to happen during Noah’s real lifetime. II Peter 2:5 states Noah was a “preacher of righteousness” in his day, so he had to have warned rulers and commoners alike. A brief scene in the movie also indicates to me that the movie seeks to foreshadow the development of mankind’s racial differences in the post-Flood world by showing Noah’s three sons with wives of diverse races.

This looks like a very riveting presentation of the story of Noah and the Ark if these sample segments are any indication. Indeed, the segments create the impression that this movie will be a visual spectacle to be remembered! I hope the movie lives up to the expectations it has instilled in me. I certainly intend to see it as I consulted the theater’s link and found a theater in my city which is showing the movie on April 9, 11 and 13. If you have an interest in seeing this movie, I urge you to visit the indicated link to see if a theater in your area is also showing the movie. I do not know if this movie is being released only in the USA or it is being shown in other nations as well.

With the increasing efforts of the godless Left and humanist globalists to discredit the Bible, Christianity and the reality of a Living God, this kind of movie should, in my opinion, be enjoyed while such a movie can still be made and presented. This looks like a great movie to take children to as it will serve as a valuable teaching lesson for a very important biblical historical lesson.

Thank God for America’s First Amendment to the Constitution. While Americans (and hopefully people in other nations) will be able to see the movie, I can think of a number of nations where this movie would be censored so people in those nations would never be allowed to see this movie. I think Christians should patronize such efforts to bring Christian themes to the big screen. If a large number of people see the movie, perhaps more Biblically-thematic movies will be made in the future.

Please do yourself a favor and view the two previewed segments in the link below!