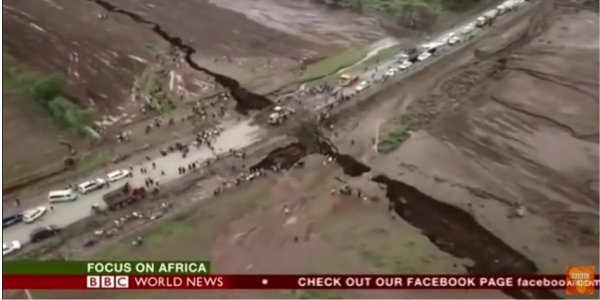 One of this planet’s more riveting geologic events is when a great chasm suddenly opens up in the earth without warning. This type of event has just occurred in Kenya’s Great Rift Valley. A large chasm, several kilometers long, formed quickly within about a week, according to media reports. In some places it is over 50 meters deep and over 20 meters wide (approximately 150 feet deep and 60 feet wide). It has ripped a major road apart as well as disconnected water and utility pipes.

The first link and second link offer you excellent aerial video-clips showing the size of this chasm that opened up unexpectedly. Apparently there was no seismic warning that this would happen. The Great Rift Valley in Kenya is part of a very long fault system that runs through East Africa and northward into the Jordan River Valley region in Israel (third link). The first link caught my eye as I was watching it on the BBC News on the American PBS-TV network, and it triggered a reminder about one historical account and two prophecies in the Bible.

When Moses was leading the people of Israel out of Egypt during the Exodus, there came a time when a rebellion occurred which was led by a Levite named Korah and two Reubenite princes named Dathan and Abiram (Numbers 16:1-4). This led to a confrontation between Moses and the rebellious faction. God was exceedingly displeased with the rebellious faction and God opened up a sudden chasm in the earth underneath the rebel leaders, their families and their followers–killing them all (Numbers 16:28-34). The Israelites were then traversing a region that included a northern portion of this same Great Rift zone that just had a chasm open up in Kenya. As you watch the videos in the first two links, you can easily visualize what kind of chasm suddenly opened up under the rebel faction in the Exodus period.

One prophecy that came to mind as I watched these videos was Revelation 11. This is the chapter that contains the prophecy about the Two Witnesses, two immensely-powerful prophets that God will send with a warning message to mankind during the latter days (see my article, The Two Witnesses). At the end of their ministry (verses 1-6), they are slain by a global power called the “beast” and their bodies will lay dead for three and one-half days (verses 7-10). These slain Two Witnesses will then be resurrected and a sudden great earthquake will occur which causes ten percent of the city to fall and causes 7,000 fatalities (verses 11-13). While not named, the city affected is clearly going to be Jerusalem where Jesus Christ was crucified (verse 8). While we do not know when in the future this will occur, it is years off as the Two Witnesses have not yet begun their miraculous ministry. However, this prophesied earthquake will occur along the northern portion of the Great Rift Valley that has now experienced the sudden opening of a chasm in Kenya.

The second prophecy that I thought of is mentioned in several prophetic scriptures These scriptures prophesy that a great, global earthquake will occur all over the world at the very end of our age. Isaiah 2:17-19, 24:18-20 and Ezekiel 38:19-20 all mention this global quake. This should give us all a sobering reminder that such a global seismic event is ahead of all of us at some point in the prophetic sequence in the years ahead of us. The chasm that opened up in Kenya give us a tiny indication of what will happen globally when these prophecies are fulfilled.