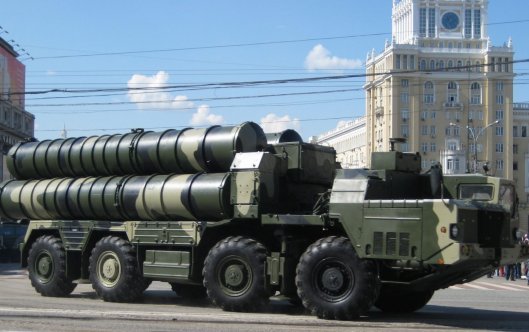 In the first link, it is reported that, after a consultation between Israeli Prime Minister Netanyahu and Russian President Putin, Russia decided to not send a sophisticated air defense system to Iran that was scheduled to be shipped there. This shows at least one thing, when Netanyahu speaks with Putin, Putin listens and Netanyahu has meaningful things to say. Netanyahu gets results and Putin clearly respects him. Reportedly, Netanyahu warned Russia that missiles sent to Iran end up in the hands of Lebanon-based Hezbollah, and that this lowers the threshold to a wider war in the Mideast. Putin needs Hezbollah’s fighters to help Assad keep power in Syria; therefore, Russia does not want a major Israeli-Hezbollah war at this time as Hezbollah fighters would no longer be available to help Assad and Hezbollah would be chewed up in such a war. I wouldn’t doubt that Netanyahu and Putin had more to talk about, but some things surely never made it to the public media.

The second and third links pertain to the growing confrontation between China and virtually everyone else in the Pacific Rim area due to China’s continued military build-up on artificial islands in the South China Sea. China has placed more fixed military installations and weaponry on those islands and sent more warships as well, while the US sent a carrier battle group into the region to warn China against military actions. The fourth link adds that China is streamlining its command structure to be better able to fight a major war. On this matter, I think it needs to be pointed out that there is an obvious contrast between Chinese and American actions in the South China Sea. China is creating “facts on the ground” by building islands, basing military forces at them, etc. The USA’s actions are limited to symbolic actions: “show the flag” measures that are soon over. I think if we had a stout-hearted US president like Ronald Reagan, he would have begun building a US base on an island in the South China Sea as soon as China began building an artificial island in that Sea. He would have understood that action needs to have an equivalent action in response, not a mere “feel good” measure. To its credit, Australia has announced a major naval build-up (as a recent post noted) and Japan and India are increasing their military power due to China’s build-up.

The fifth link warns about the consequences that could result from Turkey’s decision to launch an artillery barrage of Syrian government forces on the Syrian side of the border. This could be taken by Syria (and Russia) as an act of war. Turkey was shelling positions inside Syria as it not only wants to oust Assad, but it also wants to attack the Kurds wherever they are expanding their territory vs. ISIL. The sixth and seventh links (Kurdish and Russia media sources) examine the Turkish actions in their shelling of Kurdish positions inside Syria. We all know that the Kurds have been the most effective fighting force inside Iraq and Syria vs. ISIL, so whenever Turkey shells (or launches air strikes) vs. the Kurds inside Syria or Iraq, Turkey is effectively acting as ISIL’s ally. The whole world can see it, but I don’t think Turkey sees how strange its actions look to the rest of the world. There seem to be many universal constants in the world. The sun always rises in the east, the oceans are always composed of water and Erdogan always hates the Kurds. Maybe someday we’ll know why. It seems to me that a stable, independent Kurdish state in northern Iraq and Syria would be a good thing for Turkey. An independent Kurdistan would be a fellow Sunni nation, the Kurds could make money pumping oil and Turkey could make money transporting it via their pipelines. Also, an independent Kurdistan would almost surely eliminate the need for the PKK to fight Turkish forces to obtain a Kurdish state in Southeast Turkey. Any Turkish Kurd in Turkey could then emigrate to an independent Kurdistan. However, that’s just the way I see it. To outsiders, the complexities of the Mideast appear very opaque at times.

The eighth link is about Egyptian-French military cooperation. The French and Egyptian navies are conducting naval exercises off the Libyan coast. These exercises feature a French aircraft carrier and a new Egyptian missile warship (which was made in France). The link discloses that the nations of France, Italy and Egypt are planning a joint military action vs. ISIL in April or May. If this happens, it will certainly roil international geopolitics. If it does happen without any US participation, it will signal a new era in global politics as nations form their own new alliances as Obama leads the USA into an ever-greater retreat on the world scene.

India has test-launched a new medium-range ballistic missile which is nuclear-capable (ninth link). This missile would make Pakistani cities vulnerable to Indian nuclear missiles, and would contribute to a mutually-assured destruction (MAD) deterrent between Pakistan and India. Depending on where India bases those missiles, they could also put Chinese targets within range. No doubt, India will be lengthening the range of its nuclear-capable missiles to strike deeper into China to create the same kind of MAD deterrence with China.

Meanwhile what is the US doing? Well the Obama administration is so incapable of ordering or supplying military equipment to vital American forces that the US Navy Seals are now complaining that they don’t even have enough rifles to conduct training maneuvers (tenth link)! Such incompetence speaks volumes about the performance of the Obama administration when it comes to military matters. In any other administration that I can recall, some DoD officials would have been sacked over this woeful shortage where Navy Seals have to train by sharing rifles. However, in the Obama administration, such bungling officials may get promoted. It gets worse, In the final link is a report that the US naval fleet may soon be shrinking to its lowest level of warships since 1915. It states the US Navy was headed toward a target of 263 vessels, far below the 600-ship navy of the Reagan years. The decline is particularly bad in the number of US “Ohio-class” (nuclear missile-equipped) submarines. Notice that the last link was dated in 2013. I’m sure Obama’s disarmament policy has likely gotten even worse since then.

My thanks to a reader who drew my attention to three of these links.