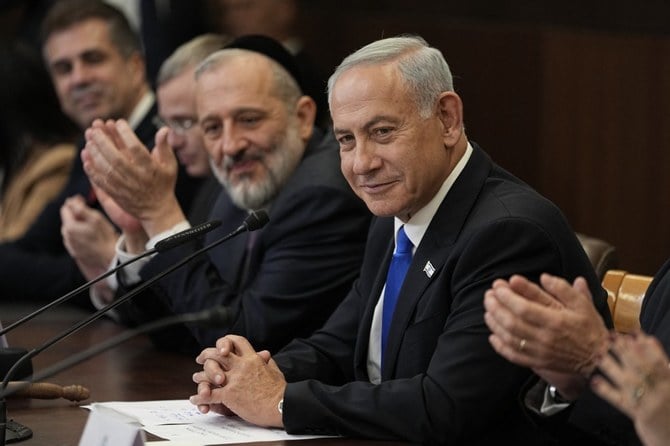 As readers know, the Israelis finally have a majority government. Former Prime Minister Benjamin Netanyahu is once again the Prime Minister, and he has a majority coalition that, if it sticks together, can impose its collective will on Israel’s internal policies and foreign relations. You may have seen some media reports and/or commentaries offering a dismal review of this new Netanyahu government replete with warnings that the peace process is now  dead in the Mideast. Ignore those panicky reviews. The election of Netanyahu with a true governing coalition changes the political situation in the Mideast in ways generally not appreciated.

The first link offers an insightful analysis into how Leftist elites have been trying to seize power over Israeli governments, and how Netanyahu’s election defeats those goals. Netanyahu will govern with 64 nationalist/rightist seats in the Knesset, Israel’s Parliament, compared to 46 seats for the leftists–a strong majority for Netanyahu. Under Netanyahu’s government, Israel can be expected to become a nationalist, strongly Jewish nation in the Mideast. It will strengthen Israel’s security, be determined to stop Iran from obtaining nuclear weapons, foster settlements in “Samaria and Judea” (what the establishment press calls the West Bank), and revitalize the Abraham Accords process of strengthening ties with Sunni Arab nations.

Another insightful analysis of the new government’s intentions is found in the second link from The Asia Times. It argues that the Israelis, the Sunni nations and Turkey will increasingly ignore the USA and EU, and that the Mideastern nations will find their own way to a new Mideastern alignment that is of their own making. It includes a mention that the Biden administration has tried to meddle in Israel’s internal affairs and has been rebuffed. It also reports that while a majority of American Democrats have largely abandoned Israel, American Republicans strongly support Israel. While Israel will surely put on a public face of cooperating with the Biden administration, the Israelis really have no reason to trust the Biden administration at all. Biden’s surrender to the Taliban and his unusually cowardly retreat from Afghanistan argues the USA’s “security guarantees” aren’t reliable while Biden is president, and the policy of the Obama and Biden administrations to cozy up to Iran at the expense of the Israelis and Sunni Arab nations gives further reasons to Israelis and Sunni Arabs alike to distrust Biden’s motives. This second link also notes the nationalist Netanyahu government is not anti-Arab, but will “seek accommodation with the Arab world at large.” This policy opens up many intriguing possibilities. The third link reviews the progress to date of the Abraham Accords, and reminds us that Israel now actually has a mutual defense agreement with a Sunni Muslim Arab nation–Morocco. Israel and the UAE have also developed steadily closer national ties. I expect that more such agreements will follow as Netanyahu works to build a united Israeli-Sunni front to oppose Iran in the region.

Key to Mideast politics at present is the tripartite relationships among Israel, Turkey and Saudi Arabia. Netanyahu is openly stating that he seeks full diplomatic relations with Saudi Arabia as part of a new Mideast security arrangement against Iran. Mideast politics are very messy.  Israel regularly strikes at Iranian military assets either in or being sent to Syria for a future attack on Israel. Israel recently staged an air raid at such targets at the Damascus airport, putting that airport out of action for a time (fourth link). Israel seems to be able to attack at will Iranian assets inside Syria, which attests that Israeli intelligence has secret ways to keep tabs on Iranian intentions and military movements.

Turkey recently joined with Israel to re-establish diplomatic ties between their nations. This is an indication that Turkey is moving away from relations with Iran and moving in Israel’s direction instead. Turkey wants a leadership role among the Islamic Sunni nations, but has been out-of-step with Arab Sunnis because of Turkey’s apparent dalliance with Shiite Iran in recent years. Another factor moving Turkey in Israel’s direction is the lucrative profits that will flow from a large gas field that is being developed in the Eastern Mediterranean Sea. Israel, Greece and Cyprus are allies in this venture and Turkey was the odd man out. Military action was threatened over this matter, but I think cooler heads will prevail in which Turkey will be allowed a share of the profits from this gas field in exchange for amicable relations between Turkey and the other three nations. As Israel becomes an energy exporter due to the natural gas fields off Israel’s coast, its interests will begin to align steadily with those of Saudi Arabia, the Persian Gulf states and other energy exporters. The losers in this equation are the Palestinians who have virtually nothing to offer any other diplomatic partner.

One dynamic that is not being discussed is one which I feel is of primary importance behind the scenes. Saudi Arabia controls the two most important locations in Islam: Mecca and Medina. It would like to also control the third most important site: the Temple Mount in Jerusalem. Israel very much wants a Third Temple on the Temple Mount and the inclusion of national religious parties in Netanyahu’s coalition will intensify efforts to make this happen. This dynamic may bring the Israelis and Saudis into a mutually acceptable deal which also includes full diplomatic relations between the two nations. Israel could accept Saudi administration of the Temple Mount as well as policing of the Palestinian regions to insure no attacks against Jews occur. Israel, in turn, would receive full Saudi approval of the Jews’ right to build a Third Temple on the Temple Mount. This kind of deal would give both nations what they want very badly. The Saudis have long had an offer on the table that if Israel makes a deal with the Palestinians, Saudi Arabia and all Arab nations will recognize Israel. A big Saudi-Israeli deal would be a natural expansion of the Abraham Accords. The Saudis may offer the Palestinians a “two state solution” the Palestinians won’t like: a disarmed Palestinian region wherein the Palestinians would have a symbolic “capital” somewhere in East Jerusalem and local civil autonomy under Saudi supervision. If the Palestinians reject this offer, the Saudis may say “we tried” and openly recognize Israel in a mutually-beneficial agreement. Currently, Jordan has titular control of the Temple Mount and it does not want to lose that role (fifth link). I think the warning by the Jordanians in this link is directed at Saudi Arabia as much as at Israel. The Saudis may give Jordan a secondary role in supervising a Palestinian zone and the Temple Mount to keep the peace between the Saudis and Jordanians. I’m not predicting that this must happen or that it will happen on any particular timetable, but this kind of outcome is now very possible in the Mideast. Indeed, Netanyahu’s presence as Israeli Prime Minister makes this type of deal more likely. It would be a very logical furtherance of the Abraham Accords.

If the Jews obtain rights to build a Third Temple the entire Judeo-Christian world will focus on latter-day, biblical prophecies which indicate that just such an event will occur prior to the end of this current age and the coming of the Messiah (Jesus Christ, in Christian expectations). The news that a Third Temple has been approved and will be built would electrify the Jewish and Christian worlds. Daniel 8:11, 11:31 and 12:11 all have language that point to a Temple being in existence in the latter days (with Daniel 11 including a parallel to an ancient desecration of a previous Temple), and Revelation 11:1-5 prophesies that two incredibly powerful prophets of God will come on the scene even as or just after a Temple site is being “measured” for construction (this language does not require the Temple to be finished before the Two Witnesses are unleashed). If the Israelis and Saudis reach an agreement which allows for Saudi administration of the Temple Mount’s Islamic sites and the construction of a new Jewish Temple, we should watch very closely for the fulfillment of these prophecies. Matthew 24:15, Mark 13:14 and Luke 21:20 all refer to an “abomination” being placed in a “Holy Place” and this is most logically referring to an abominable statue/idol or an abominable person being physically present in the Holy Place of a New Jewish Temple. Again, I’m not predicting these prophecies must be fulfilled in our immediate future, but the election of a very religious/nationalist government in Israel does make such a fulfillment more likely than has ever previously been possible in our lifetimes. If/when the Two Witnesses are empowered by God and sent into action with breathtaking miraculous power for three and one-half years (Revelation 11:3-6), their power will upend the plans of all nations (see my research paper entitled, The Two Witnesses), and it will confirm that we are entering the final countdown to the end of our age.