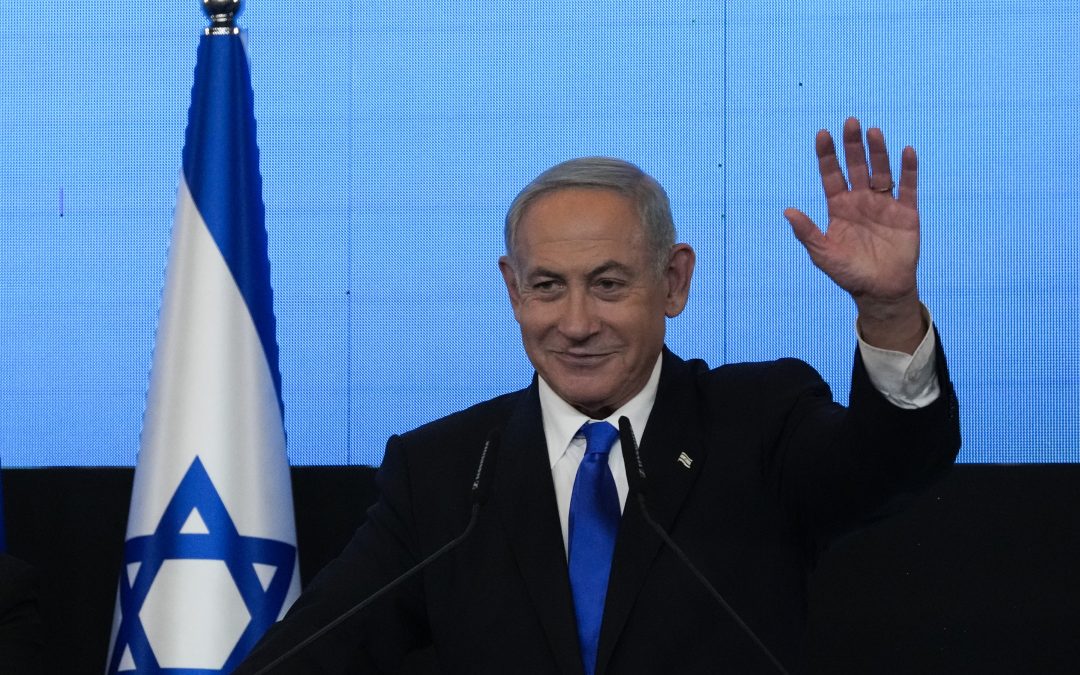 As I’m sure readers realize, former Israeli Prime Minister Benjamin Netanyahu will soon be occupying his old office again. His election climaxed a series of inconclusive elections in Israel in recent years. However, in this recent election Netanyahu won a clear parliamentary majority for his party and its coalition allies (first link). His election will have some clear ramifications for Mideast geopolitics.

One of the first ramifications is that Netanyahu will have a free hand to actually govern the nation with a parliamentary majority. This will make it easier for him to take decisive action when it is needed. Indeed, it may be needed before too long. Iran has just announced it has a hypersonic missile which can “penetrate all air defenses (second link).” That is a risky claim to make. By making that claim, Iran (which has pledged to wipe Israel off the map) has given Israel all the justification it needs to launch a preemptive strike to stop attacks by Iran’s hypersonic missiles. Netanyahu is coming back into power at a time when Iran has become more openly militaristic. Many media reports have documented that Russia is using kamikaze drones imported from Iran to strike Ukraine’s infrastructures. The third link adds that Iran is about to send an even larger array of weaponry to Russia for use against the Ukrainians. Besides more kamikaze drones, Iran is reportedly going to send ballistic missiles to Russia. That report begs a question: since Russia has been building missiles of all types for decades, why does it need to import ballistic missiles from Iran? It certainly infers that Russia is running out of certain types of missiles and must import them for use in its war vs. Ukraine. Iran’s increasingly threatening policies could hasten an Israeli preemptive strike. Iran threatens more nations than just Israel, so some of those other nations might join in such a strike.

Indeed, even if the Biden administration does not help the process, the Abraham Accords have taken on a life of their own. The fifth link offers information on how close Israeli cooperation now is with some Sunni nations threatened by Iran. It reports that a major Israeli aviation/defense company is participating in a prestigious aviation event in Bahrain. Israel’s participation will include openly exhibiting military products within an Arab nation. The link adds that Israel has already approved the sale of a sophisticated air defense system to the United Arab Emirates (UAE), a sign that greater Israeli-Sunni security cooperation will likely occur under a Netanyahu administration. Such increased cooperation could take the form of both open and clandestine cooperation.

The sixth link goes into greater detail about the deepening Russian-Iranian military cooperation. Since Iran is supplying Russia in its war against Ukraine and the USA and NATO are supplying Ukraine with many weapons to defend itself against Russia, it increases the possibility of the Russian-Ukraine war expanding to include more nations if it is not concluded by a negotiated agreement. The deepening ties to Russia might also embolden Iran to attack either the Israelis or the Sunni nations. This could also drag the USA into a Mideast war as the USA is, like Israel, pledged to never allow Iran to obtain nuclear weapons.

If a regional war does erupt in the Middle East, it will almost surely have a huge effect on global energy markets, inflation, etc. If Iran and Saudi Arabia begin to attack each other’s oil fields and refineries with missiles, bombs, drones, etc., the global effects of such a war would be devastating to world markets.

We are living in dangerous times, even though the major news media apparently do not want to focus on how dangerous it could get. Iran has been trying to pre-position troops and weaponry into Syria for a war against Israel for years, and, also for years, Israel has been attacking Iranian assets located inside Syria. Israel has also intervened inside Iran a number of times to slow down Iran’s nuclear program (as I have discussed in a number of posts over the years). Iran and Israel have already been waging a low-level war for years in these actions. It wouldn’t take much of a spark to create a regional war in the Middle East.

As I have mentioned in previous posts, Iran will never succeed at “wiping Israel off the map.” God, in the Bible, has guaranteed Israel’s survival ( Zephaniah 2, Zechariah 12 and 14). Israel will be attacked and invaded (Zechariah 14), but these prophecies also guarantee Israel’s survival and future.