Netanyahu Flies to Moscow to Discuss Iran with Putin 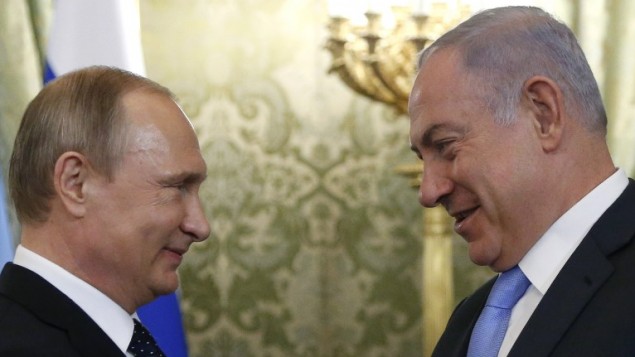 Amidst all the political coverage of the ramifications of the Wikileaks dump of revelations about the secret programs used by US intelligence agencies, very important things are also happening in other parts of the world. A crucial meeting just occurred about which people should be informed. Israeli Prime Minister Netanyahu just flew to Moscow to hold a very important meeting with Russian President, Vladimir Putin. The first link and second link offer perspectives on this meeting, and quite correctly report that Netanyahu wants to discuss Israeli concerns about Iran’s growing Mideast influence, and the security risk this poses to Israel…and to Russia.

Iranian power and territorial influence has grown rapidly in the Mideast during the Obama presidency. As ISIS seems to be gradually losing its war to hold Aleppo and other territory in northern portions of Iraq and Syria, all parties are starting to look at the post-ISIS Mideast to see who will have the advantage. I think this situation is what Netanyahu flew to Moscow to discuss with Putin. Iranian power and influence is on the rise, and at some point, Israeli “red lines” will be crossed which will require Israel to take military action to secure its own safety against Iran’s stated desire “to wipe Israel off the map.” I think Netanyahu wanted to make sure that Putin knew where Israel’s “red lines” are in the Mideast, and to make sure Russian and Israeli military forces do not end up being drawn into a conflict if Israel has to take military action. No doubt, Netanyahu wants Russia help to prevent Iran from crossing Israel’s “red lines.”

Let’s review Iran’s growing Mideast power and influence. Iran has essentially taken over the central government of Iraq as both Iran and Iraq have Shiite governments. Russia, Iran and Hezbollah have kept Assad (Iran’s ally) in power in Syria according to all current estimates of a post-ISIS Mideast. Lebanon has mostly become a client state of Syria and Hezbollah. Iran, Iraq and their Shiite militias are trying to control as much of northern Syria and Iraq as possible in order to create a “Shiite arc” of power and territorial control that will stretch from Afghanistan to the Mediterranean Sea. In Yemen, Iranian-backed Houthis control much of northern Yemen and the Shiite-backed forces inside Yemen have so far resisted Saudi efforts to uproot them. Iran gains two things from its Yemenite involvement. It wants to situate itself so it controls the Red Sea/southern approaches to Egypt’s Suez Canal. If ultimately successful, Iran would gain considerable power to block maritime traffic to Egypt’s Suez Canal and to the Jordanian port at Aqaba. It would also be encircling Saudi Arabia if this happens. At the very least, Iran has pinned down Saudi forces in Yemen so Saudi Arabia has few reserves to devote to efforts to thwart Iranian goals in Syria and Iraq. The USA should be leading the effort to stop these Iranian plans, but Obama essentially acted as an ally of Iran’s goals and the USA is still flying many air attacks vs. ISIS ground forces. In effect, the USA is acting as the de facto air force for Iranian goals to spread its tentacles over all the Mideast in the post-ISIS world. The third link and fourth link describe the Iranian goals to create a Shiite Arc of control all across the Mideast. The American media has been very slow to realize this increasingly dangerous situation. The Sunni nations in the region (Saudi Arabia, Jordan, Turkey, Egypt, etc.) have a vital interest in making sure that Iran does not create a Shiite Arc from Iran across Iraq and Syria into Lebanon and the Mediterranean coast. This would divide the Sunni nations into two separated portions in the Mideast. Israel shares a vital security interest with the Sunnis in stopping this Iranian goal. Seeing all this, Israel’s Netanyahu has decided it was time for some serious face-time with Vladimir Putin.

I believe Israel has decided that it will act to make sure the Iranians are not allowed to bring any weapons into the region which could threaten Israel’s survival or its security interests. For Israel, this is an existential issue. I believe Netanyahu made it clear to Putin what Iranian weaponry inside Syria would cause Israel to go to war to defend itself against the forces of a nation which wants to destroy Israel. If it has to go to war with Iran, it is highly likely the Israelis will not be fighting alone. Turkey has already moved some of its sizeable Sunni army into northern Syria and it is poised to send a large number of military forces into the region to block Iranian/Shiite goals if necessary. If the Israelis, Jordanians, Saudis, Turks and Egyptians all move to stop Iran’s plans for Shiite domination of the Mideast, a large Mideast war could result. I believe Netanyahu wanted to make sure that Putin knew that Israel has no desire to fight Russian forces and that he sought to create mechanisms to prevent direct Russian-Israeli confrontations if a Shiite vs. Sunni/Israeli war erupts in the Mideast. If such a war erupts, I think it can be stated that Iran’s nuclear facilities will be primary targets for its rivals in the region.

Ordinarily, the USA should be playing a lead role in this emerging confrontation. However, Presidents Obama and Bush have exhausted the US military and downsized it to a dangerously low level. It will take some time for President Trump to accomplish his goal of rebuilding the US military. The US forces are hitting ISIS hard now, but in doing so, the US is actually advancing Iranian goals for the post-ISIS world. To play a meaningful role in stopping Iran’s goals, the USA could directly supply the Kurdish forces in northern Iraq and Syria and reinforce them. The Kurds are Sunni Muslims and are natural allies to the Sunni nations in the region. However, Turkey and the Kurds have many issues to resolve to enable them to act as partners in a Sunni bloc against Iran and Iraq.

As readers can see, the Mideast is a very complex region and it is edging toward a crisis that may be very difficult to avert. I think Netanyahu sees all this and realizes he needs to have some kind of “side deal” with Russia to make sure Israeli and Russian forces do not tangle if a Mideast war does occur. One last wild card to consider. If a major Mideast war does erupt, the USA must support Israel and the Sunnis and Trump will be compelled to “do something” in the region. What that”something” will be is anyone’s guess.