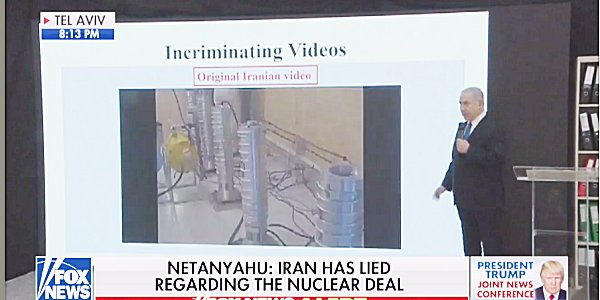 Israeli Prime Minister Netanyahu has dropped a bombshell on the world’s political, military and intelligence communities. In an address to the Israeli nation, Netanyahu revealed that Israel had obtained massive quantities of documentation about Iran’s nuclear program secrets. Known as “Project Amad,” it was designed not only to build Iranian nuclear weaponry and mate them to delivery missiles, but also to dupe the world into thinking Iran had no such program. The first link, second link and third link offer the perspectives of various news organizations. The first link, from Fox News, includes Netanyahu’s speech to the Israeli nation, and I highly recommend that readers watch it.

Netanyahu reveals Israel has 55,000 pages of Iran’s secret files about Project Amad as well as an equal number of files stored electronically. For Israel to have obtained these files, it has to have conducted one of the most incredibly successful clandestine operations in history. If you watch Netanyahu’s presentation, listen for his inference that Israel not only has the copies of Iran’s files, but that it also now has the originals! He asserts that Israel knows where the originals are now safely stored. Iran must be looking at every insider in its nuclear and missile projects for embedded Mossad agents. Netanyahu asserts that Iran “lied…big time” to the world about its secret nuclear programs. That Iran could have conducted its secret nuclear weapons program for years while denying it to the world leads us to one of two equally unappealing concomitant truths. Either (A) the intelligence services of President Obama’s administration as well as those of all the signatory nations to the Iranian nuclear agreement were blind to all of Iran’s nuclear activities or (B) they knew about it and were complicit with it. The latter option is especially dangerous in its ramifications. I can’t think of a third alternative. Can you? President Trump is soon to decide whether to renounce the nuclear agreement with Iran. He is getting pressure from both sides of this issue. I believe Netanyahu’s revelations were given at this time so President Trump has all the justification he needs to renounce the agreement.

As readers of my posts know, I have offered much evidence that a major war in the Mideast is very possible and that it could break out at any time. Israel has announced its determination to make sure that Iran does not have the military forces in place inside Syria to launch an existential strike vs. Israel. The fourth link has details about a major strike against Iranian missiles and military equipment already inside Syria. One report states that up to 200 missiles were destroyed and that the majority of those killed in the raid were Iranians. The link offers two possible sources for this raid. Either it was the Israelis destroying the ability of the Iranians to hit Israel hard from Syrian soil or it was an American-led operation from a friendly airfield in Jordan or some other local nation. I know which of the options I think is true, and I will leave it to readers to decide for themselves which was the actual source of the raid.

The final link further cements the growing alliance between Israel and the Mideastern Sunni Arab nations who are all increasingly threatened by Iran. Crown Prince Mohammad bin Salman of Saudi Arabia flatly stated that Israel has a right to exist on their own land, and he compared the Supreme Leader of Iran to Adolph Hitler of Nazi Germany. Did the Saudis have a role in the penetration of Iran’s secret nuclear files? Who knows? No nation is about to answer that question.

These further developments confirm the accuracy of the prophecy of Ezekiel 38-39 in the Bible. It prophesied over 2,500 years ago that a particular alliance would come into existence in the “latter days” of our current age (just prior to the Messianic Age/Millennium). It has been called the Gog-Magog alliance and it is led by three major nations in the modern world. Russia is identifiable as the “Rosh” (or “Gog”), Meshech and Tubal of Ezekiel 38:2-6, Iran is identifiable as “Persia,” and China is the very populous entity called “Gomer and all his bands.” “Togarmah of the north quarters” would designate the Siberian region of Russia, Mongolia and perhaps North Korea.The word “Ethiopia” in the King James Version is actually “Cush” or “Kush.” This term is found in the modern world on the Hindu Kush Mountain range across Northern Pakistan and Afghanistan. Northern Afghanistan was the where the Al Qaeda terrorist organization originated and is now a Taliban-contested region. Pakistan is already openly allied to China. That a prophecy given over 2,500 years ago has been so precisely fulfilled in the modern world is very strong proof that it was divinely-inspired This modern alliance could not have fulfilled the biblical prophecy by random chance. Iran has many proxies in the Mideast who are agents of the Gog-Magog alliance’s goals. These include Hezbollah, the Houthis of Yemen, and–increasingly–the Shiite central government of Iraq and Hamas. Syria is a part of the Gog-Magog alliance via its alliance to both Russia and Iran.

At some point in our future, this intensely anti-Western alliance will attack the modern nations of “Israel” or the “House of Israel” (Ezekiel 39:22-23, 25, 29). The term “Israel” in biblical prophecy indicates the modern nations of the ten tribes of Israel–not the Jews/Israelis (who are called “Judah” in biblical prophecies). The Israelis will be attacked at the same time as the ten tribes of Israel, but their theater of battle is foretold in prophecy in Zechariah 14. The USA, the United Kingdom and many of the modern NATO nations are the ten tribes of Israel in the modern world, along with Australia, New Zealand and parts of other nations. Abraham was prophesied to be the father of many nations in the world (Genesis 17:5-6), not just one small Jewish nation in the Mideast. Even when the northern tribes of Israel were sent into exile in the 8th century BC, God promised that he was going to make them exceedingly numerous in their new locations in the world (Hosea 1:10). An inevitable outcome of large populations is national power and military might. My four-book set on the entire history of the tribes of Israel and an E-book on the same subject are available for ordering at the homepage of my website. All the books have extensive bibliographies and have copious chapter endnotes so readers can duplicate all my research if they wish to do so. The books’ conclusions are solid and irrefutable. You can prove the books’ conclusions simply by secular evidence or by biblical prophecy, but both sources entirely complement each other.

For more information on the above subjects, I also urge you to read the following free articles at my website: Are We Living in the Biblical Latter Days?, Four Reasons the Jews are Judah, The USA in Biblical Prophecy, and What Ezekiel 38-39 Reveal about a Future World War III. Modern world events will be so much more understandable when you realize there is a divinely-ordained “script” to world events in our time. These articles and my books prove this divinely-ordained script is being played out before our eyes on the world stage. Obviously, many details are not given in the Bible, but the overall pattern of events and the final outcomes are revealed in the biblical prophecies that have already come to pass (or are coming to pass) in recent years.

PS. I wouldn’t be surprised if everyone involved with the Iranian nuclear program and the storage of its secret files is now being subjected to rigorous lie-detector tests after Netanyahu’s revelations that the Israeli intelligence services have been “reading Iran’s mail.”