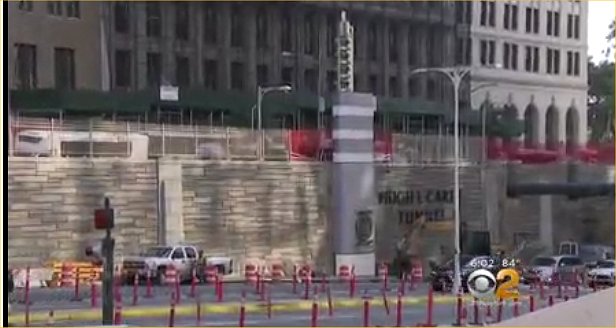 This post is to alert readers to a new mystery technology that is being deployed within New York City. It is being deployed under the auspices of the local MTA with great secrecy and local officials are very unwilling to reveal the true purpose of these new towers–which are apparently going up quickly at many entrances to tunnels and bridges in New York City. The first link is a report on these mysterious new pylons/towers being erected in great secrecy. The secrecy about the purpose of these new towers is so deep that even Board Members of the MTA do not know the purpose of these towers, which begs the question: How did they fund via the MTA even though at least some of the MTA’s own Board Members are unaware of the tower’s purpose or origin? The secretive towers are estimated to cost approximately $100 million dollars. You can see what the towers look like in these links.

MTA officials are tight-lipped about the project’s purposes, but one official did admit it has something to do with the Department of Homeland Security (DHS). With the DHS involved, it may have been funded as a secret project with federal funds instead of local funds. The second link offers a list of possible purposes for these mysterious towers. Since these mysterious towers/pylons are being built near the entrances to towers and bridges, that is a strong indication that the towers have a purpose to prevent any terrorist acts that could blow up a bridge or implode a tunnel. This also begs the question: Did the DHS and other federal, state and local officials receive a credible threat warning of such an attack in the future? Other suggested purposes for the secret pylons/towers include the possibilities that they are radiation detectors (presumably to detect any “dirty bomb” or “suitcase” nuclear weapon being transported to an intended target) or that they have a “bomb sniffing” technology. Indeed, all of these possible answers may be correct. It is also suggested in the first two links that they are equipped with sophisticated facial-recognition technology. This technology could logically be used to track and apprehend terrorists or criminals or to monitor all people passing by them as part of a population-control program.

I’d like to suggest one other possible use for these towers. If they identify an immediate threat, these towers have to have weaponry to be able to, for example, quickly stop suicide bombers from entering a bridge or tunnel before they proceed any further. Can the detection systems in the towers/pylons suddenly trigger the erection of a physical barrier hidden in the road surface which can “pop up” to stop traffic from entering a tunnel or bridge? Are they equipped with a new sophisticated technology such as a device which can emit a very localized, non-nuclear EMP or an electronic dampening field at a specific suspect’s vehicle to immediately stop its electrical systems from working so the car will stop moving? Just such an electronic dampening field was included years ago in an episode of the popular TV program NCIS. In an episode, one of the NCIS agents had a hand-held device which emitted an electronic dampening field so a terrorist could not send a wireless signal from a wireless phone to a bomb planted under a bus to explode and kill civilians. If it was featured in an NCIS (Naval Criminal Investigative Service–a US federal agency) TV episode years ago, surely this technology has been advanced considerably since then.

If the technologies in these new towers/pylons are now being deployed in New York City, they may soon be erected near high-value potential targets in your city (or nation) as well. Why not take a look at the links to see what these secretive towers look like? Clearly, they are being mass-produced if the towers being deployed in New York City all look alike. Maybe they have already been installed in locations where you live. The third link offers many other perspectives on these mysterious new towers being installed in New York City. One thing is for sure: Due to the media publicity about them, they are “secret” no longer.

This is, I believe, just one more example of the many types of new people-monitoring technologies that are being deployed or field-tested at various locations around the world. Revelation 13:16-18 prophesied that in the latter days, a global power structure called “the beast” in the prophecies of Revelation would be able to monitor and control financial transactions all over the globe (Revelation 13:1-7). Only the development of very sophisticated technologies like those being invented and deployed today could fulfill this biblical prophecy. If these technologies will be used to monitor and control people’s financial technologies, will they not also be eventually used to monitor and control many other aspects of people’s behavior? For more information on biblical prophecy’s relevance to our modern times, please read my article, Are We Living in the Biblical Latter Days?

Wherever you live, enjoy your freedoms while you have them.