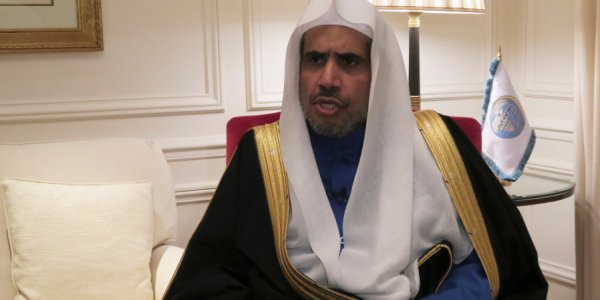 In a remarkable example of how rapidly relations are warming between Israel and the Sunni Muslim nations, the Secretary-General of the Muslim World League, Mohammed al-Issa, issued a statement which strongly condemns those who are Holocaust-deniers. [Yes, you read my sentence right.] This is a strongly pro-Jewish, pro-Israeli statement from a prominent leader within the Islamic world. Secretary-General al-Issa is identified as a former “Justice Minister,” and I assume that means he was formerly in that post within Saudi Arabia, as the Muslim organization is identified as being Saudi-backed.

This remarkable statement includes this language: “…we consider any denial of the Holocaust or minimizing of its effect a crime to distort history and an insult to the dignity of those innocent souls who have perished. It is also an affront to us all since we share the same human soul and spiritual bonds (Emphasis added).“

This is truly a game-changing pronouncement for the Sunni Islamic world to make through a respected Muslim leader. Would anyone who lived in at least the six decades immediately after 1948 have believed they would ever live to see such a favorable statement toward the Jews from a prominent Islamic organization? These words show how far the Sunni Islamic nations have come toward the common goal of forming an alliance with the Israelis against their common enemy: Shiite Iran and its many proxies in the Mideast. Those who have followed my posts over the last few years have seen that, based on biblical prophecy, I felt such an alliance was coming and my posts drawing attention to a number of interim steps toward such an outcome. This expectation was based on my belief that the Sunni Arab nations are the descendants of Ishmael, the son of Abraham via Hagar. Ezekiel 38 identifies the global alliances that will come into existence in the latter days (Ezekiel 38:8 and 16) of our age. While “Persia” (modern Shiite Iran) is listed as an ally within the Gog-Magog alliance headed by Russia and China, the Ishmaelites are not listed as being a member of that alliance. This argued that while the Shiites, led by Iran, were definitely going to be allies of Russia and China in the latter days, the Sunni Arab nations would not ultimately be a part of their alliance. This appears to be coming to pass in world events. Indeed, it is worth noting that not a single nation in the modern world descended from Abraham is listed as a member of the latter-day Gog-Magog alliance.

Notice the words I italicized in the above quote. Secretary-General al-Issa’s statement notes that the Jews/Israelis and (at least some of) Islamic nations “share the same human soul and spiritual bonds.” Could that be a subtle acknowledgement that the Sunni Arabs and the Jews share a common origin in that both of them are descended from the Patriarch, Abraham? If this blood relationship, however ancient, is being recognized, it further explains why the Sunni Arabs and the Israelis/Jews are converging into an alliance against Shiite/Persian Iran.

For an in-depth examination of how modern nations, great and small, are now almost entirely found within the alliances prophesied for them in Ezekiel 38, please read my article, What Ezekiel 38-39 Reveals about a Future World War III. When you understand how accurately a 2,500 year-old prophecy foretold the global alliances of the modern world, it is an inescapable conclusion that a Creator God had to have inspired Ezekiel 38-39 and that He is now guiding modern national destinies to fulfill that very prophecy.