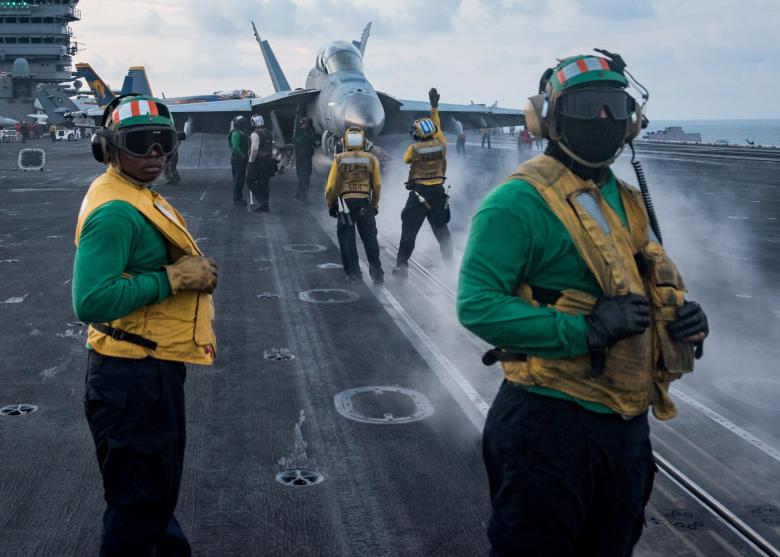 In an on-going story that the American mainstream media is missing, the USA and its allies are regularly conducting joint naval exercises in the Pacific region  These are important exercises, and they are not “just for show.” It is no secret that China has dramatically increased its military forces, including its navy. The first link, from the Japanese media, gives details about China’s use of its first operational aircraft carrier to intimidate Japan, Taiwan and other Pacific region nations. It also reports that China’s second carrier has been launched and will become operational circa 2020. The concern about China’s military intimidation of its neighboring nations is more evident in the Japanese media, which is why I’ve enclosed it as the first link.

The USA, Japan and allied nations are responding with naval exercises of their own to flex their muscles and also to ensure that the naval fleets of allied nations can operate smoothly together in a wartime situation. The second link discusses US-Japanese naval exercises near the Korean Peninsula–very understandable in light of the North Korean threats to launch nuclear missile attacks on Japan, South Korea or the USA. The third link is especially interesting as it reports that a French carrier has reached Japan and that it will perform a major role in a joint naval exercise with Japanese, American and British forces. That French carrier came a long way from its European port to participate in this exercise, and its presence in the Pacific region speaks volumes. The fourth link and fifth link discuss joint fleet exercises between the USA and India last year, and even mention that these two nations were considering joint military patrols of the South China Sea. The fourth link notes the Japanese navy participated with the US and Indian navies in joint naval exercises and that the Indian navy has been sending warships into the South China Sea “almost constantly.” While Japan and the USA have no territorial claims in those waters, both nations must ensure the free navigation of all ships in the South China Sea to safeguard the multi-trillion dollar maritime trade that passes through the South China Sea. Interestingly, it also discusses a closer relationship between India and Vietnam in naval matters.

Why are such naval exercises needed on a regular basis? While it does remind the Chinese that there is determined opposition to Chinese encroachment into the international waters of the South China sea, there is a more vital technical reason for such maneuvers. The listing of the national navies in these links comprise a roster of nations likely to oppose any Chinese provocations that lead to warfare in the South or East China Seas. These nations’ navies speak different languages, have software programs written in different languages by different suppliers, and have sailors and airmen who are unfamiliar with the naval fleets of their likely allies. Each navy is also continuously retrofitting and upgrading its warships in its own internal linguistic systems. These navies have to drill to make sure their upgraded software systems can properly and instantaneously communicate properly in a combat environment. Due to regular changes being made in the warships of each nation’s fleet, these changing systems need to be drilled together to locate and correct any glitches now before they must work correctly under combat conditions. These navies must drill to make sure their shipboard systems, sailors and pilots can electronically and visually recognize each other so they will not fire on friendly forces. Their escort ships must drill to make sure their electronic air defense systems can operate seamlessly together in defending each nation’s’ carriers and other major warships. Pilots must drill to make sure they can recognize the warships of allied navies so they do not launch weapons mistakenly at friendly ships. The crews of each nation’s’ warships must be sure they understand each other’s navigational commands so they do not collide with each other in fleet movements. There are many such reasons why these navies must regularly drill together to make sure their warships can operate smoothly together in wartime conditions. There is no question that the likely enemy that they may have to mutually fight is China.

These links illustrate that the nations of the western alliance are acting to strengthen their alliances and prepare their warships to fight together in a future war. As long-time readers of this blog already know, a great world war at the end of our age will occur. This age-ending World War III is prophesied in Ezekiel 38-39, Joel 2, Zechariah 14, Matthew 24, and in many locations in the book of Revelation. Ezekiel 38-39 identifies the respective alliances’ national members in the two rival latter-day alliances more specifically than all the other biblical prophecies. The Gog-Magog alliance in Ezekiel 38-39 is prophesied to include Russia, China, Iran and their allies. This alliance has formed in modern times exactly on God’s timetable for the latter-days, and its formation confirms that the God who wrote the latter-day prophecy of Ezekiel 38-39 is in overall control of geopolitical events and that we are, indeed, living in the latter days when the Gog-Magog alliance was prophesied to develop. The western alliance is led by the USA. many European and NATO nations, Japan, India, Australia and New Zealand and their allies. The modern nations of the ten tribes of Israel are identified by the term “Israel,” “land of Israel,” or “house of Israel” in Ezekiel 38-39.The Israeli nation is identified by the prophetic term “Judah” in Zechariah 14.

In a world deeply blinded to the reality of the Creator God and the truthfulness of biblical prophecy, the nations and their leaders do not realize that they are actually implementing a Divinely-written script which was given millennia ago to biblical writers. If you wish to identify the modern nations according to their proper biblical terminology, I urge you to order and read my books, listen to my audio messages, and read my free articles: Are We Living in the Biblical Latter Days?, What Ezekiel 38-39 Reveal about a Future World War III, Japan’s Role in Biblical Prophecy and The USA in Biblical Prophecy. No person with an interest in God’s biblical prophecies can possibly understand or anticipate the future developments of global geopolitics unless they can first identify the modern nations by the terminology that applies to them in biblical prophecies. I urge you to read and review the above-mentioned items so you are among the people who understand what is happening and what is going to happen in modern events.