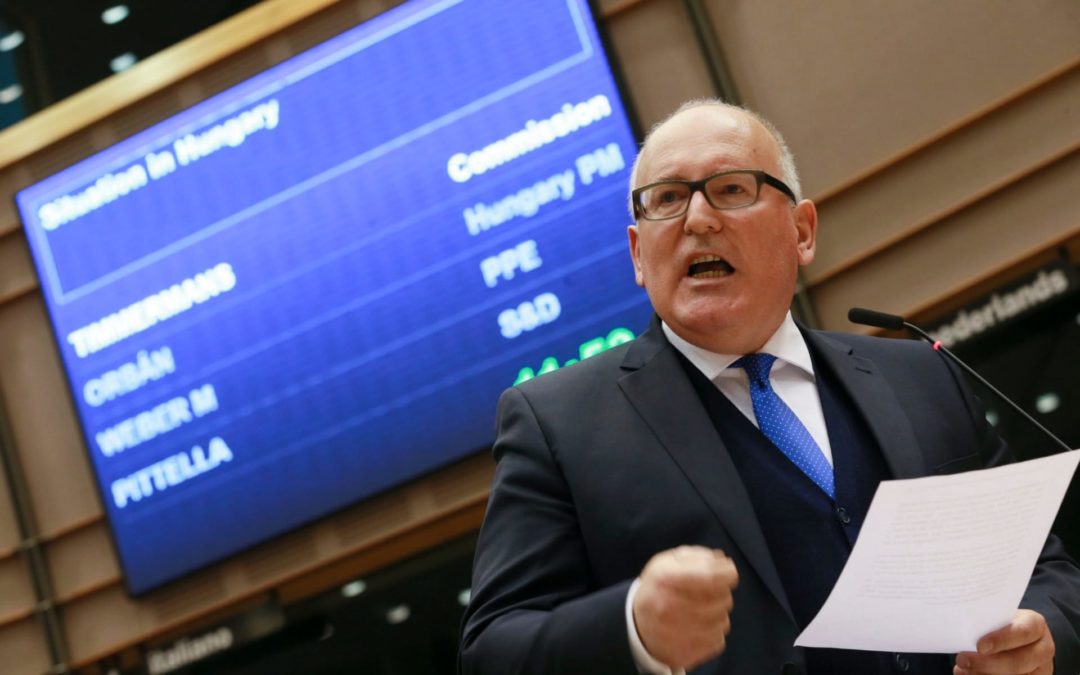 The internal pressures threatening to fragment the EU from within are growing, and I wanted to update readers of this blog with new information on the EU’s increasing disunity. The first link and second link detail a major feud that has developed between Poland and the EU bureaucracy. The EU’s President, Donald Tusk, is threatening to strip Poland of its voting rights within the EU due to a variety of conflicts between the nationalist government of Poland and the globalist government of the EU. So far, Poland is not showing any willingness to back down on its disputes with the EU. The links discuss whether the EU will essentially invite Poland to leave the EU, but it is a murky matter regarding how that could be accomplished.

There is more to the Poland-EU dispute than meets the eye. There are major personality conflicts involved. EU President Tusk is Polish and he used to be the Prime Minister of Poland (third link). However, the current Prime Minister of Poland is the head of a nationalist political party that now rules Poland. The current ruling party of Poland ousted the globalist political party of Donald Tusk from power inside that nation. It is not hard to make a case that Tusk is trying to overthrow the nationalist party now governing Poland and thereby pave the way for a return to power by Tusk’s old political party. On the other hand, the current governing party of Poland must surely see Tusk as a “turncoat” who has betrayed Poland’s national interests and who is trying to make Poland a mere servant of the EU.

The fourth link and fifth link detail more disputes that have developed between the EU, on one hand, and the EU nations of Hungary, Slovakia, the Czech Republic, Romania, Bulgaria (and Poland again) on the other hand. Four of these nations (Poland, Hungary, the Czech Republic and Slovakia) are sometimes called the “Visegrad” group as they are increasingly acting in concert together against the EU bureaucracy.  The first, second, fourth and fifth links list these six nations which are becoming increasingly resentful of the EU’s policies. These nations all have one thing in common, and this is a very important reality that is not shared by the western European nations dominating the EU. These six Eastern European nations have only been truly free and independent nations for one generation (since the collapse of the Soviet Union circa 1989-1991). Prior to that, these nations were first under the boot of the Nazis for several years during World War II and then they were under the boot of the Soviets for almost a half-century. Having been deprived of true national freedoms and sovereignty for so long, these nations will, understandably, guard their national rights and independence very jealously. The Western European nations dominating the EU have been free for a long time and they are more likely to trust multinational entities like the EU.

Personally, I think the EU is overplaying its hand vis-à-vis Poland and the other above-named Eastern European nations. The EU leaders do not grasp the different views toward external controls that are held by the long-oppressed nations of Eastern Europe. The EU could potentially drive these Eastern European nations out of the EU. For example, if the EU gives Poland “a spanking” as if it were a small child by depriving it of its EU voting rights, I would not be surprised to see Poland leave the EU and, if Poland leaves,  it could be followed out of the EU by the other three members of the Visegrad Group. Indeed, if that happens, Eastern European nations could join the United Kingdom (which is already leaving the EU due to its Brexit vote) in forming a new European trade union that would rival the EU. If this happens, the European continent could be split wide open with one bloc following the lead of the British and the other bloc following the lead of the Germans. Readers should all recall that the ties between Poland and the UK run deep. The British declared war on Nazi Germany right after the Germans invaded Poland. Poland had made significant strides in breaking the Nazi’s Enigma code and their expertise was flown out of Poland to the UK just before Poland fell. The Polish government-in-exile was given refuge by the British in World War II, and many Free Poles fought alongside the British and Americans in World War II. Perhaps it was merely coincidental, but amidst this current row between the Poland and the EU, the British royal family paid a state visit to Poland recently in which Prince William stressed the longstanding ties between the British and Polish peoples (sixth link).

The above are not the only developing stresses within the EU. An EU court has recently (and unexpectedly) ruled that EU nations hosting uninvited immigrants (almost all from the Islamic Mideast or nations within Africa) have the right to return those immigrants to the EU nations who first accepted them into the EU’s jurisdiction (seventh link). The case involved immigrants who had initially arrived in Croatia on their way to Austria and Germany, but this could have very far-reaching ramifications for all EU nations. Northern and Central European Nations that no longer want to host the unwanted immigrants could now be freed to return their unwanted immigrants back to the EU nations which first let them into their borders. There are some qualifications to the EU court’s ruling, but this could result in hundreds of thousands of migrants being returned to Greece, Italy, Spain and those Balkan nations which first let them in. This would devastate Greece and Italy which are already overrun with immigrants and have no place to put other immigrants if they are returned to them from EU northern nations (eighth link). If this ruling is used by northern EU nations to dump their migrants back on Greece and Italy, those two nations will have every reason to also secede from the EU as they cannot cope with the logical effects of that ruling. As I’m sure many readers realize, Italy has recently been rescuing large numbers of immigrants from the Mediterranean Sea, but Italy has done so under the the assumption that other EU nations would take “their share” of these immigrants. Previous posts have documented that Austria and Switzerland have taken military action at their borders to keep these migrants from entering their nations from Italy and Hungary has built a secure fence to keep any more immigrants from entering its territory from the south. Italy is going to have to quickly re-evaluate its policy on rescuing immigrants from the Mediterranean Sea. Indeed, in light of the EU court ruling, Italy’s government is likely to fall if it continues to indiscriminately bring in large numbers of immigrants from Mediterranean boats. Many nationalist forces are threatening to turn EU nations against each other.

All the above is consistent with biblical prophecies in Revelation 17-18 that the globalist governments and institutions (called “Babylon the Great” in Revelation 17-18) will eventually collapse and be replaced by a new global system called the “beast” system in Revelation’s prophecies. The EU is a very important part of the globalist entities of Babylon the Great’s current world system. If the EU is ripped apart by a major schism, it could trigger a fall in global monetary and financial markets. The Euro is the currency backed by the EU, and if the EU collapses, the credibility of the Euro could collapse with it. After all, if the EU fractures, which nations will be left “holding the bag” of the EU’s debts and the obligations to back all the bonds, global trade deals and derivatives denominated in Euros? How many nations leaving the EU would also “secede from the Euro” and adopt their former national monetary currencies?  Since the Euro is one of the main currencies included in the valuations of the Special Drawing rights (SDRs) of the IMF, a crisis in the Euro would also undermine the SDRs issued by the IMF. It is not hard to see how such a crisis could cascade quickly through all global markets. Indeed, the language of the prophecy in Revelation 17-18 argues that this collapse will occur rather suddenly and unexpectedly when it happens. For more information on the Bible’s prophecies cited above, please read my articles, Is Babylon the Great about to Collapse… Ushering in a new Beast System? and The Babylonian Origin of the Modern Banking System.

The growing internal stresses inside the EU are a situation we would all do well to watch carefully.

My thanks to a reader for sending me a number of these links.