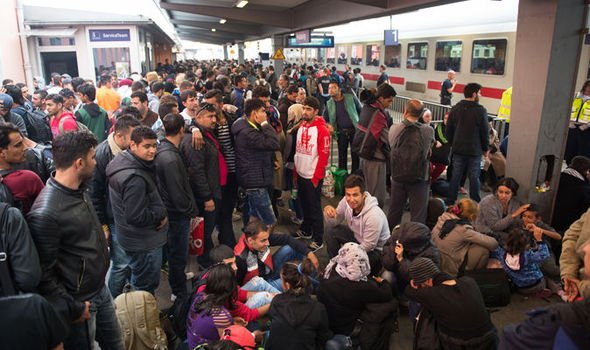 In an update on the growing European crisis caused by the continuing Islamic immigration into Europe, it is ever-more apparent that some kind of explosion inside the EU is becoming increasingly likely.

The first link reports that Macedonia, a small nation in the Balkans that is in the direct path of so many Islamic immigrants heading north into Europe, is using tear gas and stun grenades on the immigrants to keep them from coming into Macedonia from Greece. Few immigrants are being allowed into Macedonia, and this is creating a mass of immigrants accumulating in Greece. Greece, having been impoverished by the EU and IMF in its debt crisis, cannot possibly afford to feed and shelter all the Islamic immigrants accumulating in Greece–mostly from Turkey. The second link reports that Austria is also taking stern measures to stop the influx of immigrants into that nation. It is limiting the number of immigrants coming into Austria to only 80 people per day and closing its borders as soon as that daily limit is reached. An EU top bureaucrat is quoted as saying that Austria’s action is “‘plainly incompatible’ with European Union law,” but I don’t think Austria cares any more about what the EU bureaucracy thinks on this matter. I think Austria is concerned about national survival.

German Chancellor Merkel is still unbending in her policy to allow a seemingly endless river of Islamic immigrants into Europe. This is starting to anger more of her own people. She is still politically safe in her position inside Germany, but her support is steadily slipping (third link). Even if Merkel stays in office in Germany with her policy, her support among other European nations is likely to plunge to the point where Germany loses its influence over other EU nations in matters of overall European policies. This will also steadily weaken both Germany and the EU itself.

There is a Bible prophecy that applAll Postsies to this situation. Deuteronomy 28 lists a variety of blessings or cursings that will befall the tribes of Israel depending on whether they obey God and his laws or forsake God and his laws. Verse 43 of that chapter states that one curse for forgetting God and disobeying his laws is that “The stranger that is within thee shall get up very high; and you shall come down very low.” As is well-known, Europe has all but forsaken the God of the Bible and Christianity. Only a few pockets of believers remain. It is also evident in my books that many European nations are descended from the ten tribes of Israel and are therefore subject to the curse of Leviticus 28:43 that “strangers” (i.e. “immigrants” or “foreigners”) will start to take ascendancy over the native-born populations in these nations if they forget God. The Islamic immigrants look like they intend to impose Islamic culture and Sharia law on Europe. They show little or no desire to assimilate into European culture at all.

This crisis just keeps getting worse. The Islamic immigrants are becoming a bigger burden and problem to all the nations of Europe, and they are also causing a steadily greater divide between Europe’s national governments and the EU bureaucracy. At some point, national governments will flat out refuse to abide by EU dictates on immigrant policies. The nations have armies. The EU doesn’t. It doesn’t look good for the EU right now. Unless something radical is done soon to stop Islamic immigration into Europe, the EU can expect to steadily lose its control over the EU nations.