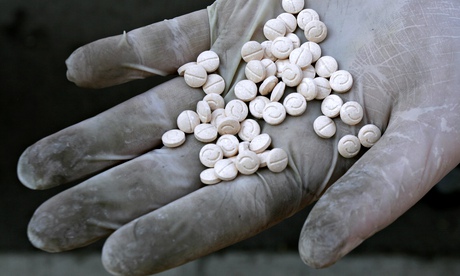 When you watch the news and see a steady drumbeat of stories about crazed and mindless acts of terrorism, have you ever wondered what could cause human beings to become and act so evil? A link I noticed tonight helps to explain why terrorists and some armed groups across the Mideast act without any apparent sense of normal humanity left in them. Until I found this link, I did not realize that ISIS and other radical groups are literally putting their adherents on mind-altering drugs to induce superhuman endurance, euphoria, psychotic behavior, etc.

A “highly-addictive” drug called Captagon is being used by ISIS and other groups to enable their fighters to stay awake for days in a euphoric state, feel little or no pain, etc. This drug is an “amphetamine pill” that was once used in the West before it was widely banned in the 1980s as being too dangerous to use. The first link below details about how widespread the use of this drug is among ISIS, various Jihadists and armed groups of all kinds in the Mideast. No wonder ISIS and other Jihadi groups exhibit mindlessly cruel and insane actions. They are literally “high” on mind-altering drugs that drive them insane.

The place where this drug is being mass-produced is Syria, and its sales generate “hundreds of millions of dollars each year” for its producers and distributors. Is ISIS (or other groups) mass-producing this drug to generate profits and create fighters and terrorists who will be heedless of all human life and decency, carry out suicide-bomber missions, etc.? If the facilities in Syria where this drug is being produced are known, Russia and France ought to bomb those facilities as soon as possible. Doing so would dry up a source of funding for terrorists and lessen the opportunity for ISIS and other groups to drug their adherents into an insane state of mind where they can do atrocities without any compunction. Bombing these facilities would make the world a safer place.

You will notice I didn’t even suggest that the USA ought to bomb these facilities. Why bother? A recent post documented that Obama is fighting a “phony war” against ISIS as he is forbidding US military forces from waging any serious combat against ISIS and US warplanes usually fly around aimlessly in the sky over the Mideast, doing nothing to harm ISIS on their “sorties.” The second link adds further documentation to the fact that Obama is not serious about actually fighting or defeating ISIS. The second link reports that Obama and his administration have known about the location of about 60 terrorist training camps in Syria and Iraq, but Obama and his dysfunctional administration have refused to bomb the ISIS training camps! Can you imagine that? The Obama administration has known about these training camps for ISIS terrorists and yet it refuses to bomb them! Were some of the terrorists who attacked Paris, France (as well as those who placed a bomb aboard the downed Russian airliner and the latest terrorist attack against a Radisson Hotel in Mali where approximately 20 people were killed) trained in these terrorist camps that Obama has knowingly refused to attack? If Obama has known about these terrorist training camps for some time and has refused to do any harm to them so they can go on accomplishing their terrorist goals, how is he not giving “aid and comfort” to the enemy? Given the vast intelligence-gathering capabilities of the USA, the Obama administration must know where at least some of these Captagon-producing facilities are. If so, it has refused to bomb them as well. If someone “out there” knows where these terrorist-facilitating drug factories are located, will you give the locations and coordinates to Vladimir Putin? My bet is he’ll vaporize them quickly.

One more detail about the drug, Captagon, which is being made in Syria and used by ISIS and other groups to put their terrorists and fighters into a crazed, drug-altered state of mind. Obama wants to admit approximately 10,000 Syrian refugees into the USA. I’d like to leave you with a question: How many of those Syrian “refugees” are actually agents for the Syrian Captagon producers who want to covertly enter the USA to set up distribution networks inside America for this very dangerous drug which can turn normal human beings into crazed terrorists?

This is one more good reason to withdraw the “welcome mat” that Obama wants to set out for these Syrian refugees. Not only is Syria a prime breeding ground for ISIS terrorists, it is the source of a dangerous, mind-altering drug that could wreck havoc if it is smuggled into the USA to be given to radicalized people who could be controlled and directed by ISIS (or other Jihadi terrorist) handlers into conducting terrorist acts inside the USA.

Some things which need to be done to fight ISIS are so obvious! Why won’t the Obama administration do them?