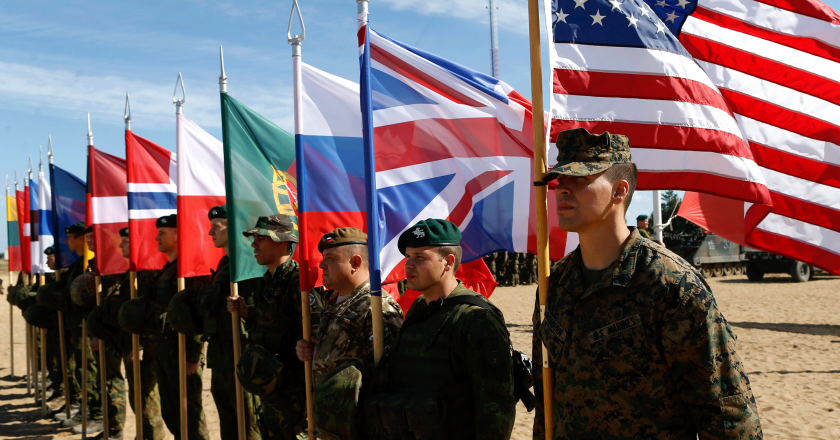 At this time when there is an ongoing military confrontation along the Ukrainian-Russian border which is receiving much media publicity, there are other military moves and developments which are happening with little or no meaningful media attention. This post is intended to update readers on some of these important military developments. This post has a number of items to convey to you, and I will offer them with a minimum of commentary as there are a considerable number of them.

The first item is news of a new concept to defend against hypersonic missiles, missiles which fly many times the speed of sound. The first link details plans to defeat hypersonic missiles via the use of space-based weapons. The link reports that Russia, China and the USA are all working on such satellite weaponry and, given the proliferation of missile development around the world, I suspect all nuclear-armed nations are working on such weaponry as well. Additionally, I’d expect Japan and South Korea to be working feverishly on some means to defeat North Korea’s expanding missile technology. Ground-based defenses vs hypersonic missiles have so little time to respond to an attack that space-based systems might have a better success rate in downing them.

The second link, while reporting on NATO’s sending small numbers of weaponry to Eastern European NATO nations, informs us that Ireland is warning European nations that Russia will be conducting major naval exercises in the sea west of Ireland. This is ominous as Russia is going to flex its naval muscles west of the NATO nations even as it flexes its ground and air weaponry east of the NATO nations near Ukraine and Belarus. Russia is surrounding NATO with military build-ups and military “exercises.” Russia saw Biden’s incredible weakness in his chaotic withdrawal of American troops and resources from Afghanistan when it was not necessary to do anything but a planned and well-coordinated withdrawal that didn’t leave massive amounts of military equipment and many “friendlies” behind. In ancient battles and even in battles in the US Civil War, military units that panicked would run in terror from the battlefields and even abandon their weaponry behind them. Biden essentially “ran in terror” from the ragged Taliban irregulars and ordered the US military to abandon perhaps $70 billion in military equipment as US forces were ordered to run away. Biden’s extreme weakness is inviting Russian pressure to see if Biden can be pushed around even more. China and Iran are watching as well.

China is again exerting heavy pressure on Taiwan in the form of large numbers of warplanes approaching Taiwan in a threatening manner. The third link gives specifics about a large such Chinese incursion into Taiwanese airspace and Taiwan scrambling its own warplanes and activating its missiles systems in the event it was a real Chinese attack. Russia, China and Iran in late January conducted combined naval maneuvers in the Indian Ocean (fourth link). The link reports that this is the 3rd such naval exercise by Russia, China and Iran since 2019 so their naval activity in the Indian Ocean is increasing. Those who have read my articles or listened to my audio messages (both available at my website’s home page) know that Russia, China and Iran are the main three members of a latter-day alliance called the Gog-Magog bloc prophesied to come into existence in the latter days of our age. These maneuvers are further examples of these three nations cooperating ever-closer in military matters, which is a fulfillment of the prophecy of Ezekiel 38:1-6 about this very alliance. New readers of this blog are urged to review my article, What Ezekiel 38-39 Reveal about a Future World War III.

There is a warning out of Israel that Iran could be within “weeks” of a “nuclear breakout” (fifth link). If true, it would argue that Israeli counter-action could be imminent against Iran as Israel has stated that it will not allow Iran to develop nuclear weapons. Israel could launch a preemptive military attack versus Iran’s nuclear facilities, do a cyber-attack against those same facilities [remember Stuxnet?] or take some other kind of clandestine action to halt or slow Iran’s nuclear programs. Staying in a Mideast context, A US-made THAAD air-defense system successfully shot down a Houthi Ballistic missile fired against the UAE from Yemen (sixth link). It is good that a US air-defense system worked as intended, but this story needs further examination. If you have a globe or map, I urge you to look at it and see where Yemen and the UAE are in the Mideast. For Yemen to attack the UAE with missiles, it must fire them clear across the nation of Saudi Arabia. Don’t the Saudis have an air-defense system which can shoot them down before they reach the UAE? Also, Yemen is an impoverished nation split into warring camps. It cannot build such missiles itself. For the Houthis to fire ballistic missiles at the UAE, they have to be obtaining these missiles from Iran–the Houthis’ long-time weapons supplier. Why aren’t ballistic missiles being intercepted on their way to Yemen’s Houthis? Also, how is Iran shipping them to the Houthis in Yemen? How can you hide ballistic missiles in an arms-smuggling operation?

Now lets consider the Korean situation–where North Korea fires off so many missiles of various types that the world scarcely pays attention any longer when this happens. North Korea is a nation that can’t feed its people or provide them with electricity. How can it develop many types of sophisticated missiles systems on its own? Answer; It can’t. North Korea is being helped by China, Russia or Iran in building and testing so many types of ballistic and cruise missiles. South Korea needs to have defensive weaponry, and it is taking actions to improve its own security. The seventh link is a video-link declaring that South Korea is developing an air-defense system which will link satellites with ground-based missiles to defeat Chinese threats in the Yellow Sea region. The link also relates that South Korea is also teaming with Indonesia to jointly develop a modern warplane, is selling warships to the Philippines, and has signed a military weapons agreement with Australia. The eighth link reports that South Korea has inked an agreement to sell surface-to-air missiles to the UAE, as well as a pact to create closer ties between the two nations on military matters. Honestly, I didn’t know South Korea had air defense missile systems to export to other nations. This argues that South Korea already has anti-missile systems of its own to use against attacking Chinese or North Korean missiles.

The Philippines is showing signs of becoming more active in its own defense. It was mentioned above that the Philippines are buying warships from South Korea. The Philippines are also buying batteries of supersonic Brahmos cruise missiles from India (ninth link and tenth link). The links examine the ability of the Brahmos missile vis-à-vis the expected abilities of Chinese defensive missiles. India is developing a Brahmos II missiles which will be hypersonic and this will represent a much greater threat to Chinese targets. India is, according to the links, positioning itself to become a major arms supplier to other Southeast Asian nations threatened by China. Such nations would include Vietnam and Indonesia. The tenth link opines that India is drawing more nations into the anti-China “Quad” now composed of India, Japan, Australia and the USA. Two members of the Quad, Japan and Australia, just signed an agreement (eleventh link) which facilitates the training and stationing of military forces in each other’s territory to better serve the purpose of mutual defense. Expect to see Japanese military units training in the vast outback regions of Australia. Australia has vast swaths of land available for training purposes, but the Japanese home islands have few such locations.

Just two more items! The U.S. Army is purchasing armored vehicles with a laser gun as the primary weapon (twelfth link). It is admitted the laser can destroy incoming drones, artillery shells, mortar shells, etc., but its full capabilities are classified. This laser-equipped armored vehicle is being delivered to an army unit for training purposes now, and is expected to eventually be deployed throughout the U.S. Army. Finally, you will recall the efforts of Belarus to push hordes of refugees into Poland recently. Russia is also deploying its military forces into Belarus, which shares a common border with Poland. Poland is building a permanent border wall all along its border with Belarus (thirteenth link). The wall will be 186 kilometers long, and should greatly enhance Poland’s ability to prevent infiltrators from entering Poland via Belarus. [Joe Biden should look at Poland’s example of defending its vulnerable border and do the same thing along the USA’s southern border. However, that would be the entirely logical thing to do, so there is almost no chance of it happening during a Biden administration.]

The above military developments are just samples of the almost feverish efforts by nations to prepare for a looming regional or global conflict. The above weaponry developments are what the nations are publicly admitting. What would really be interesting is if we could know about the military developments which the nations are keeping secret as they build and deploy them. The Bible has a prophecy that when the current world financial/political system is overthrown by a new “beast” system, that the beast system will reveal new weaponry that the masses had no idea existed. Revelation 13:1-4 contains a prophecy about the time when the beast power begins its reign, and verse 3 states the masses will say “Who is able to make war with him?” This reaction shows the masses had no idea these unveiled new weapons systems even existed. So…in the future if you see a great global upheaval that changes the political/monetary/financial system of the world and the new “world leader” proclaims the unveiled weaponry is to “keep the peace” so nations don’t fight each other, please realize that you are seeing not the advent of the Messianic Age/Millennium but rather the start of the beast system’s dominance of the earth. Revelation 13:5 limits its time of dominance to 42 months. Revelation 19:11-20:4 prophesy the beast’s reign will end when Jesus Christ returns at the head of a heavenly army to take control of the planet. This sounds like a hard timetable for knowing when Christ’s return will occur, but it is not that simple. Matthew 24:21-22 also prophesies that due to a global crisis that will threaten to exterminate “all flesh” on the earth, the prophetic timetables will be cut short by God to make sure that doesn’t happen. Therefore, we should view that 42 month timetable for the beast’s dominance as a maximum time-span, not a minimum one.