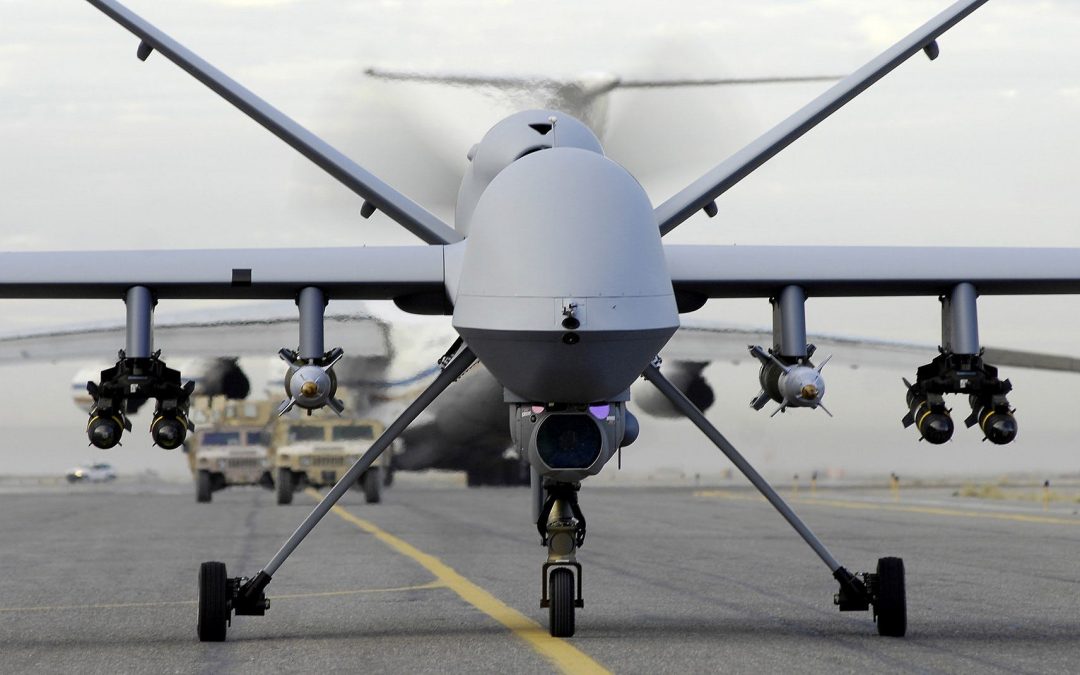 Several new developments have occurred in the Mideast which indicate the region is moving closer to a major war. The first development is that Iranian-backed Shiite militias in Iraq attacked a US base in the region with rockets, and US warplanes struck back hard. US planes attacked an Iranian Al Quds Brigades compound and destroyed the rocket launchers used to attack the US base (first link). This is the first time I’m aware of that US and Iranian military forces have come to blows in the region. While an Iranian-backed unit fired the rockets, it was using Iranian equipment which almost always means Iranian forces are present as well. That an Iranian Al Quds compound was at the base that launched the rocket attack vs America forces supports that conclusion. The first link calls this escalation a “radical change” in the Mideast level of confrontation.

The second development is that the US military has developed and deployed a new weapon into the Mideast conflict. It is a modified Hellfire missile which can be fired at a very specific target such as a terrorist leader or opposing commander. Instead of an explosive charge, it uses sword blades that deploy and spin just before hitting the person or persons pinpointed for death. It was actually developed to minimize civilian deaths among bystanders. This new and deadly missile is now being used in the Mideast by the US against selected enemy individuals. The second link and third link describe this new missile and show photos of the results of its use. The links show this new missile shreds cars and the people inside of them, but it does protect innocent bystanders and targets only the intended targets.

Also, Iran is reportedly deploying a “hidden arsenal of short-range ballistic missiles” in Iraq (and perhaps other locations) which can target American military bases as well as military bases, infrastructure facilities and cities within Israel and Saudi Arabia (fourth link). This also raises the stakes in the Mideast that a regional war could break out. Iran has never recanted its stated objective to “wipe Israel off the map” and they are taking steps to do just that. If Iran authorizes its forces inside Iraq to launch these missiles vs. American, Israeli and Saudi targets, targets inside Iran will surely be hit quickly and hard. Indeed, if it looks like Iran is about to make such an attack, a preemptive strike vs. Iran is very possible. Such a strike would likely target Iranian weaponry in many Mideast locations (Iraq, Syria, Lebanon, Gaza and Iran itself). The first link also notes that Israeli forces are training in Cyprus, a close Israeli ally, to simulate the kind of mountainous warfare that Israeli forces would encounter in Syria and Lebanon in a major war.

Iran is also opening a new front in its drive to encircle Israel. Israel has announced that Iran is placing missiles in Yemen that could reach targets inside Israel (fifth link). These missiles would be under Iranian/Houthi control, and the Houthis have already fired missiles deep into Saudi Arabia. Since Israel has made many hundreds of attacks against Iranian targets inside Syria in order to protect Israel, this announcement may signal Israel’s readiness to launch longer-range attacks against Iranian military forces and weaponry inside Yemen. Since Saudi Arabia is already at war with the Iranian-backed Houthi Shiites, this may indicate that joint Israeli-Saudi attacks vs. Iranian targets inside Yemen may be in the offing.

Finally, Russian forces have taken over a former American military base in Northern Syria as part of the Turkish-Russian joint patrols along a strip of Northern Syria land that adjoins the Turkish border (sixth link). It is possible that Russian forces are staying in close contact with Turkish forces not only to advance Russian interests but to keep Turkey from advancing too far into Syrian territory as Syria is a long-standing ally of Russia.

With all the above developments, it is clear that actions are being taken to prepare and position forces in the Mideast for a large regional war. Perhaps it can yet be avoided, but if Iran continues to push to eradicate the Israeli nation, a regional war is inevitable. At some point Israel will have to go to war to protect itself and its national survival. I make no predictions about when that will occur. However, I can safely predict Iran will not succeed in its goal to “wipe Israel off the map.”  There are several latter day prophecies that indicate God will not allow the Israelis to be conquered. Genesis 49:8-9 indicates that Judah (the Israeli/Jews) will be like a “lion” in the latter days and be victorious in their wars. Zephaniah 2:1-11 prophesies that God would cause the Jews to have an independent nation in the old Promised Land in the latter days that would include the Mediterranean seacoast region and the city of Ashkelon. This was fulfilled in 1948 when the Jews founded the Israeli nation which included the Mediterranean seacoast and the city of Ashkelon (a remarkable fulfillment of a prophecy given circa 2600 years ago).  This prophecy also states God will be “terrible” to the surrounding nations who “magnify themselves” vs the Israeli national borders. Zechariah 14 foretells that God will divinely intervene himself in an age-ending war in which “half” the city of Jerusalem is subjugated (verse 2), and that the invaders will die suddenly when their flesh melts off their bodies before they can fall over (verse 12). This type of death was graphically depicted in the movie, Raiders of the Lost Ark. As an aside, the condition of “half” the city of Jerusalem being conquered has alternate definitions. Does it mean half the Old City of Jerusalem? Does it mean half the modern city limits of Jerusalem? It is not cast in concrete how God intends to define that threshold which triggers his intervention. If there are any readers who need convincing that we live in the biblically-prophesied latter days, you will find abundant evidence to support that conclusion in my article, Are We Living in the Biblical latter Days?

The mainstream media is paying very little attention to some vital developments around the world. However, given the information provided in the links cited in this post, you should not be surprised if you wake up to the news that a major regional war has broken out in the Mideast. The Mideast chessboard is in place and the pieces are already moving. A low-level war has existed between Israel and Iran for some time. All that is needed is a spark to set off a major regional war.