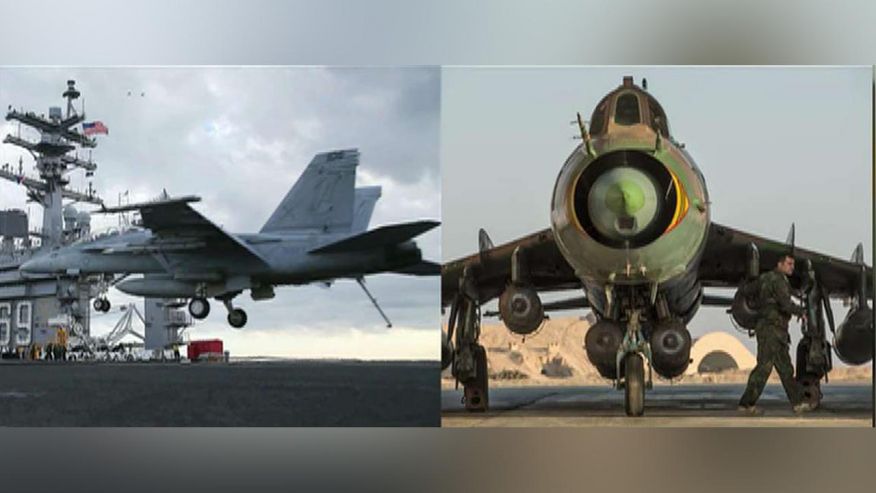 The Mideast continues to experience developments which could precipitate a regional war there. At the very least, these developments are making such a war more likely as things could spin out of control rather easily. Let’s review recent actions and reactions.

As I’ve noted in previous posts, there is a major struggle going on between the Shiite and Sunni Islamic blocs to determine how the Mideast will look after ISIS is defeated. The Iranian Shiite bloc, allied to the Iraqi central government, Syria, Hezbollah and the Russians wants to create a continuous land access between Iran and the Mediterranean Sea controlled by this Shiite bloc. The Sunni bloc, led by Saudi Arabia and joined by Jordan, The United Arab Emirates, Egypt, and other Sunni states and the Kurds, and backed by the USA as well as (most likely) Israel, seeks to block such a continuous Shiite-controlled corridor which would cut the Sunni Mideast states in half. Both sides are deadly serious about accomplishing their objectives. This could lead to an all-out regional war, but that is not a certainty.

A previous post dealt with a US airstrike that turned back a Syrian government tank column that was heading for a Sunni force near the Jordanian-Syrian-Iraqi border. The first link reports that a US Navy warplane just shot down a Syrian warplane after the Syrian warplane attacked US-backed forces. The second link contains a map indicating the latest depiction of what force is controlling what portions of real estate in the Mideast wars in Syria and Iraq. As readers will note, it is a crazy-quilt hodgepodge of overlapping and non-contiguous occupied territories that reveal just how hard it is to keep some forces from falling into conflict with each other even if such a conflict is not desired. The third link features an expert’s opinion regarding why the US had no choice but to shoot down the Syrian warplane. At any rate, Russia is not pleased and has threatened unspecified actions in retaliation. Personally, I think the Russians were conducting a test of the USA’s resolve under President Trump. By sending a Syrian warplane on a mission known to be a provocation to US interests, Russia could see if the USA would react by shooting down the Syrian plane. A Syrian plane was sent so no direct Russian-American confrontation would be sparked. If this is the case, Russia found out the USA is deadly serious about supporting the Sunni coalition and the Kurdish-backed local forces.

The fourth link reports that the Israelis and the Saudi-led Sunni coalition are in a process which is likely to lead to open diplomatic relations. This would not surprise me at all, as readers of my previous posts in recent years realize. The Israelis have a massive interest in ensuring the Sunni coalition wins its goal of preventing a Shiite corridor from Iran to the Mediterranean Sea. Such a corridor would permit Iran to send large masses of its military directly to the Israeli northern border region. Israel cannot stand by idly and let this happen as such a development would be an existential threat to the Israeli nation. If a large Mideast war does occur, expect Egypt and the Israelis to intervene on the side of the Sunni coalition. Long-time readers may recall a post I did years ago that the Egyptians and Saudis had conducted a major war game to practice how Egypt could reinforce Saudi land forces in a major Mideast war vs. Iran. Obviously, for Egyptian tank forces to come to Saudi Arabia’s aid, they would have to cross Israeli territory. If a major Sunni-Shiite war occurs, I believe the Israelis would allow Egypt’s tank forces to cross its borders to join the Saudis in repelling the Shiite Iranians. Indeed, if such a major war occurs, you might see Israeli and Egyptian tanks jointly attacking eastward to support the Saudis. Please remember that I am discussing military options and contingency plans; I’m not making specific predictions.

Readers may have noticed that ISIS recently attacked the Iranian Parliament due to Iran’s fighting against ISIS in Iraq and Syria. Iran then attacked ISIS positions in the Mideast war zone as a result (fifth link). If any such Iranian missiles “went astray” and hit US or Sunni coalition forces instead of ISIS positions, a retaliation would likely occur vs. Iranian forces.

Israel is not only forging stronger ties with Sunni nations to stave off an Iranian attack vs. Israel, Israel is also shoring up its western flank as well. Israel, Greece and Greek Cyprus had a trilateral meeting recently to strengthen their national ties and cooperation (link six). Greece, like the USA, is a NATO member, and this draws NATO nations closer to the Mideast conflict zone, albeit indirectly. A previous post discussed how several NATO nations already had military units fighting in the Mideast alongside the American and Sunni-led Sunni forces. This confirms how dangerous the situation is becoming in the Mideast. If one NATO nation has its forces in the Mideast heavily attacked by Syria or Iran, could it invoke Article 5 of the NATO treaty and call on all NATO members to join the fray? If Russia backs its Iranian and Syrian allies (which it would have to do), this could quickly morph into hostilities between NATO and Russia in the Ukrainian/Eastern European region. Don’t forget that a major terrorist attack could potentially provoke a regional war between the great powers. That is how World War I started. None of the great powers involved in World War I wanted any war to occur. A terrorist assassination in the Balkans set off a cascading series of war declarations that claimed the lives of many millions of people and ended the German and Austro-Hungarian Empires and toppled the Russian Czars.

I’m sure readers are familiar with the effort by Saudi Arabia and other Sunni nations to boycott Qatar in many ways. This is, I believe, an effort by an emboldened Saudi-led Sunni coalition to get Qatar to “toe the line” and stop any dalliance with Iran and to cut off its funding of terrorism. Oddly, this Arab Sunni boycott of Qatar is resulting in another Sunni nation, Turkey, attempting to shore up Qatar from this boycott’s effects (seventh link). Turkey has long been identified in many Internet reports as the nation which was the silent partner of ISIS in allowing fighters to cross the Turkish border to join ISIS, laundering ISIS money on international markets and acting as a middleman in selling ISIS oil to the world markets to fund ISIS even further (I’ve cited these links in previous posts). If Qatar has also been silently helping terrorist entities, it may be that ISIS was acting as a agent provocateur for Turkey and Qatar in the Mideast. Turkey, although it is a NATO member, has been acting in an increasingly Islamist and internally-dictatorial manner under Erdogan’s leadership. Unless there is a change in Turkey’s positions and actions, it may be sliding out of its NATO membership.

As if the above developments weren’t enough to stir the pot in the Mideast, China has sent warships to participate in naval exercises with Iranian forces near the entrance to the Persian Gulf (last link). This is a step by China to declare that its loyalty lies with Iran and the Shiite forces in the Mideast confrontation.

The above alignments of forces was predicted quite specifically in Ezekiel 38-39 to occur during a prophetic time called “the latter days” in Ezekiel 38, as I have long noted. Ezekiel 38-39 predicted that the Gog-Magog alliance in the latter days would include (in modern terms) Russia, China, Iran and their allies. The Shiite alliance in the Mideast is simply an extension of the Gog-Magog alliance via its Iranian and Russian connections. As I have long observed, there are no modern nations descended from the biblical patriarch, Abraham, who is the patriarch and progenitor of many modern Christian NATO and non-NATO nations (via Isaac and Jacob/Israel), Sunni Islamic nations (via Ishmael) as well as the Israelis (via Judah, a son of Jacob/Israel). These modern nations are all found in the rival alliance which Ezekiel 38-39 prophesies will be attacked by the Gog-Magog alliance at the very end of our age. Readers of my books and those who have listened to my free audio messages at my website are aware of why these identifications are clearly evident in both secular histories and biblical narratives and prophecies. I invite new readers to review my free article, The USA in Bible Prophecy, to see how the United States of America can be found in Bible prophecy.

What is going on in the Mideast is subject to a divine veto. God will intervene as needed to make sure the nations are in the positions he wants them to be in before the final great world war of our time ends our current human age and climaxes with the return of Jesus Christ. This age-ending war has many biblical prophecies which reveal how it will begin and end. You can read about these prophecies in my article, What Ezekiel 38-39 Reveals about a Future World War III. It should also be stressed that while Ezekiel 38-39 predict the outcome of the final war to end our age, this prophecy does not preclude that regional wars will be fought between these two global alliances before the final battle of our age.