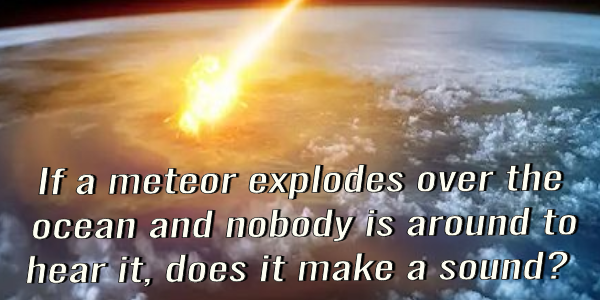 On December 23rd, 2018, a large meteor exploded in the atmosphere over the Barents Sea not far from Russia’s, Kamchatka Peninsula. It exploded in such a remote region that it went almost unnoticed for several months. It is estimated that the meteor exploded with a force of 173 kilotons of TNT–ten times the force of the nuclear bomb which hit Hiroshima, Japan at the end of World War II. I marvel that this kind of power can be generated from a meteor that was estimated to be only 10 meters (30 feet) in diameter (first link). A faint image of the distant blast was captured on a Japanese weather satellite (first link). The second link adds that the meteor exploded an estimated 25.6 km above the earth’s surface, and it includes a global map of meteor explosions and their respective intensities over a two-decade period. The second link also notes that meteor blasts of this intensity are normally expected only 2-3 times per century. Since we have had two such major meteor blasts in our atmosphere in just the last 5 years (the other one was over Chelyabinsk, Russia in 2013), it would seem we may be entering a period where meteor strikes into our atmosphere may be on an uptick. The third link and fourth link are added for additional perspectives.

The Chelyabinsk meteor explosion was a larger explosion than the recent one off the Russian coast, and it was caught on many cameras due to it happening over a city. I’m sure many readers recall the images of the Chelyabinsk explosion in media sources at the time, but I have included the fifth link which has an impressive montage of many video recordings of that 2013 explosion. Not all the images have audio content, but a few have very impressive audio recordings of the event. There is a particularly impressive audio recording of the explosion just after the 3-minute mark of the fifth link’s video. It records what sounds like a very large sonic boom followed by a series of reverberations after the main explosion. The intensity of the actual sound of the explosion in the fifth link makes me think that some of the video camera images of the explosion were captured from further away than one might have assumed to be the case. I urge all readers to listen to the intensity of the explosion mentioned in the fifth link. If you have a sub-woofer as part of your computer’s speaker system, you are in for an impressive auditory experience!

So far, mankind has been fortunate that a large meteor impact has not hit the earth’s surface in a populated area. The meteor that struck Siberia in the Tunguska region in 1906 was in an area so unpopulated and remote it was largely unknown to the world for some time. If it had hit in some populated regions of the earth, it could have essentially wiped out small nations. There have been several Hollywood movies about meteors so huge that they would annihilate life on earth. Two that come to mind are Deep Impact and Armageddon. In Hollywood movies, mankind always figures out a way to save itself from cosmic destruction.  In the future, we may not be so fortunate.

The Bible’s book of Revelation foretells that two large and destructive meteors will impact the earth during the latter days of our current age. In Revelation 8:6-13, two in a series of catastrophic plagues that are foretold for the very end of the latter days are described “as it were a great mountain burning with fire was cast into the sea” and “a great star from heaven, burning as it were a lamp (or ‘torch’) and it fell upon…the fountains (or ‘source’) of waters” (verses 8-10). These clearly describe two celestial impacts. One hits the sea and the other hits the source of waters. The second impact has to hit the earth somewhere near a location which includes the headwaters of apparently major rivers so that has to signify a land strike. The Apostle John used the low-tech vocabulary of his time to describe these events which he clearly did not witness with his actual eyes in his lifetime. He uses the words “as it were” to describe both events which confirm he was struggling to convey to the readers of his book what he saw in his vision of the latter days. His wording of the first meteor event as a great burning mountain falling to the earth from the heavens depicts almost exactly the way an incoming meteor is depicted in the movie, Deep Impact. A falling lamp or torch from the heavens describes the second object as having a tail of flame behind it.  His descriptions are remarkably like what we would literally see during any such event, and the scientific accuracy of his descriptions adds weight to John’s claim to have seen such events in his vision. These two meteor hits that are prophesied to occur will not be large enough to qualify as “extinction level events,” but their effects are prophesied to be catastrophic in the regions they hit. Other prophecies may also refer to the celestial events John witnessed in his vision. Joel 2:30-32 prophesies that at the end of this age, God will “show wonders in the heavens,” and Luke 21:25-26 foretells that there will be “signs…in the stars” and that people will die of heart attacks due to the terror caused when “the powers of heaven shall be shaken.” Meteor hits of the scope prophesied in Revelation 8 would surely cause people to experience heart attacks due to fear. Whole Revelation 8 describes two immensely destructive meteor hits during the latter days, the language of the afore-cited prophecies in Joel 2 and Luke 21 allow for the possibility that there may be numerous meteor strikes at the end of our age, climaxing in the two apocalyptic hits described in Revelation 8. Given that such destructive events lie in our planet’s future, now might be a good time to “seek the Lord while he may be found” (Isaiah 60:5-9) and to pray that you may be “accounted worthy to escape all these things that shall come to pass and to stand before the Son of man [when he returns].”

For solid evidence that we are, indeed, living in the biblical time called the “latter days” when the above prophecies will come to pass, please read my article, Are We Living in the Biblical Latter Days?