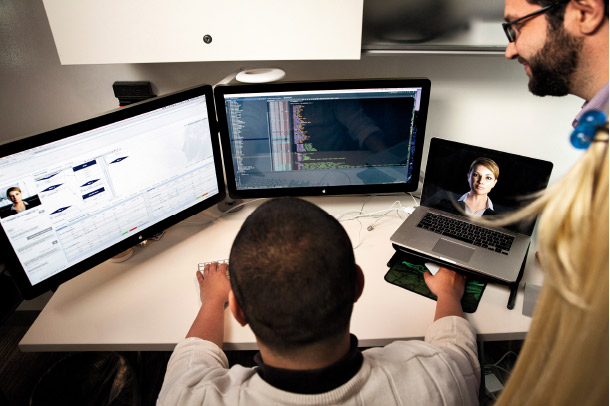 No doubt, many readers of this blog are fans of science fiction movies and themes. One reason is that so many science fiction themes, books, etc. have come true over the decades. When Jules Verne wrote his book, From the Earth to the Moon, in the 19th century, no one would have dreamed that this “science fiction” theme would become “science fact” in the 20th century. Who would have dreamed that such things as wireless technology, a global Internet, satellite communications and surveillance, etc. would come to be factual? Yet all these things are now “ho-hum” routine parts of our rapidly-changing technological world. Actually, I have read biographies of Nicolas Tesla, an accomplished genius, which indicate that his visualizations of the future included such concepts.

Previous posts have discussed the rapidly-accelerating development of 3-D printers, which were foreshadowed by the “replicators” of the Star-Trek TV programs and films. 3-D printers would have been deemed impossible just a few years ago. Another “science fiction” theme is approaching “science fact.” Remember “Data,” the lovable android robot on Star Trek–The Next Generation? The Star-Wars movie franchise also included one movie about the “Droid Wars” in which androids and artificial intelligence robots of all kinds of shapes and functions were mobilized into an army to serve the evil plans of interplanetary industrialists. We may not be that far from having androids and other artificial intelligence platforms, embodied or disembodied, becoming a part of our daily life.

The first link, from the May 2015 issue of Entrepreneur Magazine is about an artificial intelligence (AI) platform which has been developed with an attractive female voice and many human-like qualities. It is named “Amelia.” I meant to post on this last year, but was distracted by other topics. “Amelia” has been developed and programmed to function as a human-like, customer service representative, but the same program could be adapted to perform many other functions such as examining x-rays in medical labs, trading commodities in financial markets, etc. Think of the benefits to an employer. “Amelia” would never take a sick day, never need pregnancy leave, would never file a workers comp claim, would need no salary or benefits, etc. The first link includes a discussion of whether “Amelia” and her related androids would put humans out of work or make their jobs easier.

Consider the applications “Amelia” would have in a customer service role. She could instantly analyze from your vocabulary, syntax and accent the approximate level of your education, your ethnicity, and whether you were truthful in your voice patterns. You could also be evaluated by an AI-programmed android to determine whether you might respond better to a female or male “voice” if you demand/request to speak to a supervisor. Surely this artificial intelligence program can be given a male voice, name and traits just as easily as female ones. It is noted in the link that “Amelia” doesn’t just “mimic human thought patterns, she mirrors them.” Do you think that this AI program is lots of years away? Wrong. It is already being used by a number of companies that are beginning to integrate android-like intelligences into their corporate functions. Read the article to see which companies are named. I wonder how many other companies are also deploying AI androids or AI “platforms,” but are not admitting it. Did I mention that “Amelia” can be programmed to perform her functions in twenty languages? Maybe nations will start using these AI androids and programs to serve as interpreters in sensitive international treaty and trade negotiations. Think how useful androids would be as spies. I’d also bet that national intelligence agencies such as the NSA, FBI, CIA, etc. would like to deploy AI “listening programs” to monitor all intelligence gathered in terrorist or criminal detection and apprehension efforts. Indeed, if robotic AI listening programs “hear” all recorded conversations and social media communications and pass on to their human handlers only the germane material, I wonder if governments could claim “no one was actually listening” to your calls and monitoring your social media content because no actual human is doing so, but, in fact, AI-programmed “platforms” may be listening to or watching everything. “Amelia” is also an AI program that can “learn” over time do do more than what she was originally programmed to do. That sounds to me like the holographic “Doc” in Star-Trek Voyager. The second link reports that robots are being programmed to manage your money, investment portfolios, etc. Indeed, the second link asserts that “…its already happening.” Welcome to our “Brave New World.“

The article opines that within a decade, it may be hard to walk down a hallway or street and tell the difference between a human being and an android that possesses artificial intelligence. This brings up the theme of various science fiction books and films over the decades about robots “taking over” the human societies which made them. Indeed, if you ever deal with an android or AI talking platform named “VIKI,” you may want to run for the exits (those who have seen the movie, I, Robot, understand my reference.

This report reminds me of Genesis 1:26-27 which relates that the Creator Elohim made mankind in the very image and likeness of the Elohim themselves (Yes, the Hebrew word “Elohim” is a plural word)! Just as the Elohim created mankind to be a physical image of themselves, mankind has inherited the desire to create “lifeforms” in our image and likeness. Genesis 11:6 records that soon after the Deluge, mankind had already advanced technologically to the point that God observed in Genesis 11:6 that mankind was so advanced that “nothing will be restrained from them which they have imagined to do (emphasis added).” That mankind had advanced to that point so quickly after the Deluge argues powerfully that they were quickly re-creating the technologies of the pre-Flood world. That was not in God’s plan so he altered all the spoken languages of the nascent nations and made them all illiterate. Mankind then all had new spoken languages but no written languages and no one could understand or read the pre-Flood language any longer. However, Matthew 24:37 tells us that it is in God’s will for the latter-day civilization on earth to mirror the pre-Flood world’s society (including its technology), so God is allowing modern mankind to progress its technology at a “full speed ahead” rate.  The more we advance technologically, the closer we come to the technological level of the pre-Flood world, in my evaluation. I’m quite convinced that we have not yet caught up to their level of technology.

Technology is advancing so quickly that we may have to re-evaluate our expectations re: how biblical prophecies will be fulfilled in the years ahead of us. The book of Revelation has many references to a “beast and the image of the beast.” Revelation 13:15, 14:9-11, 15:2 are a few examples of this phrase. Now that the scientific community is telling us androids, indistinguishable from humans, may be walking among us in a few years, this raises the possibility that the “image of the beast”‘ may be an android which looks like the beast. World leaders such as Hitler and Churchill used “body-doubles” to dupe people into thinking they were somewhere other than their real locations or to guard against assassination attempts. An android would be a perfect “body double.” You could program an android to speak, look and move exactly like the person they were designed to emulate. Even facial expressions could be exactly copied.  You could manufacture a battalion of “copies” if you wished. If that was done, the world leader called the “beast” in Revelation could appear to be “everywhere at once” and, thereby, fake omnipresence. Especially if the androids were equipped with invisibility technology which can be turned on and off and which nations have been developing for years. My blog archives will include posts written years ago about invisibility technology and how it could be used to fake miracles and fulfill prophecies.