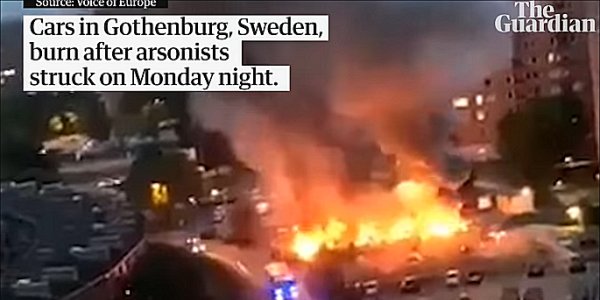 Many readers may not have seen an important event that occurred in Sweden a few days ago. Approximately 80 cars were burned in a mass vandalism attack that hit four Swedish cities on the same night. While the greatest damage was done in Gothenburg, cars were also torched in Trollhattan, Falkenberg, and Stockholm. Swedish Prime Minister Lofven is quoted as saying: “It looks like a very coordinated, almost military operation.” I think he is correct. For waves of such vandalism to hit four cities at the same time clearly shows it was coordinated by a group of people, and it does, indeed, look like a military operation. For that many cars to be torched before the police could even react does indicate it was coordinated by ex-military personnel who can coordinate such a swift attack.

Most witnesses cite teenagers dressed in black as perpetrating the incidents, but some accounts mention men as well among the perpetrators. The first link, second link and third link give details about this damage and the third link includes graphic video footage of the mass car fires. I have a theory based on what is currently known about the perpetrators–who seem to have all at least initially fled the scene without any arrests. That the perpetrators were dressed in black argues for an ISIS connection as black garb is associated with ISIS fighters and terrorists. Sweden has gullibly allowed many Islamic immigrants to enter Sweden without any meaningful vetting, so the likelihood that “sleeper cells” from ISIS, Al Qaeda or some other Islamic terrorist group could have entered Sweden is high. Such ISIS attackers have already struck inside other European nations. Unquestionably, ISIS and other terrorist groups have ex-military personnel in their ranks so a military-like operation is well within their capabilities.

There are serious questions that Swedes need to ask themselves. Will these same terrorists attack again in the same (or different) cities? Will the targets next time be Swedish citizens instead of cars? How many other terrorist cells exist among the throngs of Islamic immigrants that came to Sweden when no one was vetting them? Indeed, every European nation who allowed Islamic immigrants to pour into their nations unvetted need to be asking themselves these same questions. ISIS and other terrorist groups would surely have taken advantage of the gullibility of EU governments to embed many of their own members into the streams of Islamic immigrants who came to Europe.

This attack may have an important political impact within Sweden. On September 9, Swedes will go to the polls in new national elections. The popularity of the Leftist, pro-immigrant, pro-EU governing coalition led by the Swedish Social Democratic Party, has plummeted. There are three main contenders for winning the most seats in the new Swedish Parliament. The polls show a very close contest between the governing party, a Moderate party and a Euro-skeptic, nationalist party called the Sweden Democrats. The nationalist party has not previously been a significant contender in Swedish national elections, but it has risen to become one of the three serious contenders for winning the new election (fourth link and fifth link). Indeed, one poll in July showed them leading all parties. These poll results predated the wave of mass car-burnings that recently hit Sweden. This large and violent wave of either criminal or terrorist attacks in several Swedish cities can only serve to weaken the governing coalition as its federal agencies and police forces were incapable of a swift or effective response to stop the car-burnings. The attackers obviously thought the police would be too slow to either stop or arrest them in their misdeeds, and they were right.

Many Swedes are likely to vote for alternative parties in the election next month as a result of this attack against the Swedish nation and people. People will vote for “law and order” when those realities are jeopardized in a nation. I urge readers of this blog to watch for the results of the Swedish election on September 9th. Will another prominent European nation turn away from a Leftist/globalist rule and opt for a nationalist Euro-skeptic government? The nations of Poland, Italy, Hungary, and Austria already have done so. The USA’s voters opted for a nationalist, anti-globalist government when they elected Donald Trump as president in 2016. Mark the date on your calendar to see if Sweden becomes the next nation to do so.

This trend away from globalist governments and toward nationalist governments is accelerating. It was also predicted in biblical prophecies. Revelation 17-18 prophesy that a globalist system called Babylon the Great will be overthrown in the latter days of our age by a cryptic alliance called the “seven heads and ten horns.”  This alliance will likely be composed of nationalistic nations who are sick of the very corrupt rulership of the elites of Babylon the Great (Revelation 18:2-3). For in-depth details about this pending prophesied event (which will affect every nation), please read my article, Is Babylon the Great about to Fall…Ushering in a New Beast System? For irrefutable proof that we are living in the biblical latter days, please read my article, Are We Living in the Biblical Latter Days?