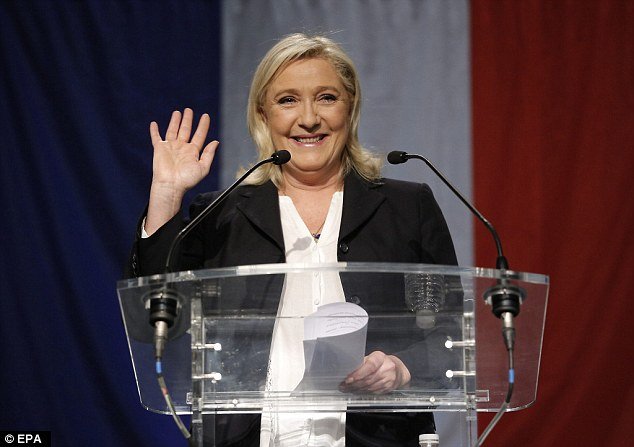 In what is undoubtedly a shocking development to all EU insiders inside Europe and all globalist insiders all over the globe, the latest French poll has the National Front’s leader, Marine Le Pen, an anti-EU leader in France, leading in the race for the first round of the French elections (first link and second link). To my knowledge, she has not led in any previous poll but has been in a position to likely make it into the decisive second round of the French national election. This makes her first-place finish in the poll a remarkable indication of a continuing anti-EU trend inside the EU nations.

Le Pen’s lead was slight, but her first-place finish in the poll will likely galvanize both her supporters and her opposition. I think her rise in the French polls is a result of continuing Islamic terrorist acts inside Europe and a growing number of crimes perpetrated against the native populations of European nations by Islamic immigrants. The more terrorist acts and crimes that are committed by Islamic immigrants, the more likely that Le Pen could win the French election. Usually, what happens is that the other parties in the French two-step election will predictably gang up on Le Pen so their supporters all rally around the candidate of whatever party is running against Le Pen in the final round of the French national election (the top two candidates face each other in a runoff election after the initial round of voting). Le Pen will need to garner more support from French voters in order to win the final round of the French election. Most observers and pollsters would surely say that there is little chance that she could win the French Presidency. Of course, we live in a rapidly changing world, and those same observers and pollsters were surely the same ones who said the Brexit referendum would surely fail in the UK and that Donald Trump could not possibly win the US presidential election. If Le Pen were to win the French national election in 2017 and the Netherlands’ 2017 national election is won by the anti-EU candidate, Geert Wilders, there will likely be national referendums in both the Netherlands and France on whether to leave the EU. If they were to both join the UK in leaving the EU and with other EU nations becoming increasingly resistant to the dictates of EU bureaucrats, the continued existence of the EU would be very much in doubt.

Speaking of Donald Trump, the third link reports that French presidential candidate, Marine Le Pen, was spotted making an unannounced visit to the Trump Tower in New York City, the site of Donald Trump’s presidential transition team. Le Pen was reportedly seen meeting there with a close friend of Donald Trump, but the link reports that “Le Pen had no meeting scheduled with Trump or his aides (emphasis added).” There is actually some wiggle-room in that statement. Did she have any unscheduled meetings with Trump, his aides or his transition team? Such a question apparently went unasked and unanswered. Was it just a sheer coincidence that Marine Le Pen, leader in the latest poll for the French presidency and being fiercely anti-EU and anti-globalist, just happened to show up on an unannounced visit to the Trump Tower, the headquarters of the presidential transition team of Donald Trump, who is also fiercely anti-globalist? Perhaps…but perhaps not. It was not that long ago that anti-EU and anti-globalist UK leader, Nigel Farage, was seen with Donald Trump at Trump Tower in what appeared to be a very convivial meeting (fourth link). Indeed, Trump and Farage have gotten along so well that they have had three meetings (fifth link). The fourth link reports the British government was not thrilled at seeing Farage and Trump becoming close friends soon after the Trump victory. The UK Prime Minister, Theresa May, was actually with the losing Remain side in the Brexit vote so it remains to be seen how aggressively she will act to implement the will of the British voters to leave the EU. The globalist insiders are getting scared, as seen by the fact that President Obama’s US ambassador to the EU is warning that it is “lunacy” for Trump to forge ties with European populist leaders (sixth link). Obama’s presidency was a very globalist, pro-EU one, so his ambassador to the EU won’t be in his position very much longer. It will make the EU very uncomfortable if the new US ambassador to the EU is a good friend of Nigel Farage.

It should also be remembered that Japan’s Prime Minister Abe quickly scheduled a trip to Trump Towers to meet with Donald Trump soon after he won the election. Egypt’s President Al-Sisi telephoned Trump to congratulate him very soon after his win in the US election (Obama had been pro-Muslim Brotherhood, which was anathema to al-Sisi who overthrew the Muslim Brotherhood to save Egypt from that group’s Islamist excesses). Israel’s prime Minister Netanyahu must be overjoyed at the prospect of working with a very pro-Israeli and pro-Jewish Donald trump as the incoming US president.

Hmm. Let’s count the number of national leaders or prospective national leaders who may become allied to Donald Trump in either an anti-EU/anti-globalist or an anti-Chinese/anti-Iranian alliance. We already have the USA, the UK, possibly the Netherlands and France, Japan, Egypt, Israel…with more nations to add to that total in 2017? That totals a possible seven nations already, and that total will surely expand further after Trump takes office. Maybe those of us who follow biblical prophecy ought to start counting these nations and especially counting where they are located. Revelation 17-18 prophesies that “seven heads and ten horns” (Revelation 13:1, 17:9-18) will tear down and overthrow the world’s globalist structures created by the globalist political and corporate elites (Revelation 18:3). The term “mountains” (17:9) describing the seven heads could mean nations, and the ten horns are revealed to be ten kings (or national leaders) almost ready to assume their offices (17:12). Will there be seven nations which bring down the EU via national referendums to exit the globalist entity? Do the ten horns represent ten other nations in Europe or elsewhere in the world who are ready to join an anti-globalist alliance? The identity of the seven heads and ten horns is still speculative, but we are deep enough into the biblically-prophesied latter days that we should start to expect to see major prophetic fulfillments at some point ahead of us (although I never set dates).

If the EU collapses, the Euro is very likely to collapse as well. This would make all contracts, loans, bonds, trade deals, derivatives, futures markets bets, etc. that are denominated in the Euro in jeopardy of immediate collapse as well. Counter-party risks could then spread quickly all over the world, bringing down other fiat currencies as well. This could lead to a very rapid cascade of collapses where the prophecy of Revelation 17-18 would be fulfilled as that prophecy indicates the merchants of the earth do have goods and services to sell…but no one can buy them. This describes very well what would happen if there was a crisis in the value of the world’s fiat money systems..where trust in them is suddenly lost. Such a global “flash crash” could happen, literally, within one hour in our digitally-connected world. Revelation 18:10 and 19 prophesy the global collapse will occur within one hour. We will have to wait and see what is the actual triggering event which leads to the fall of Babylon the Great. It may be a collapse of the EU and Euro, or it could be something else. If we live long enough, we will witness it.

If you desire a more in-depth look into the Bible’s prophecies about the latter days and the fall of the modern world’s globalist “Babylon the Great” system, please read my articles: Are We Living in the Biblical Latter Days?, Is Babylon the Great about to Fall..Ushering in a New Beast System?, and The Babylonian Origin of the Modern Banking System.