Many Wells Fargo Bank Employees Defrauded Their Own Customers! 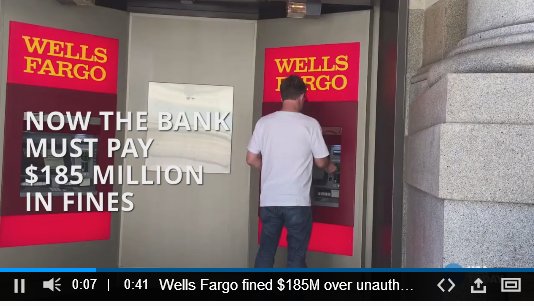 There have been many media articles about fraudulent and dishonest practices by the world’s mega-banks, for which they have had to pay billions of dollars in fines as civil penalties. However, in what appears to be mere “hand-slaps” by government agencies, the leaders of the banks guilty of the corrupt and/or criminal price-fixing and market-manipulation practices almost never are criminally prosecuted. This common result, each time it happens, reinforces the view that the government agencies are “in bed” with the mega-bank leaders that they should be prosecuting. Well, mega-bank corruption has been revealed again, but on an even greater scale, in my opinion.

Wells Fargo, one of the large mega-banks in the USA has been slapped with $185 million in civil fines for “secretly opening millions of unauthorized deposit and credit card accounts that harmed customers, federal and state officials said…” (first link). The first two links detail the breathtaking scale of what sounds to me to be a huge criminal enterprise in defrauding the bank’s own customers by stealing their identities and opening phony accounts in their names without the customers’ approval or knowledge. Reportedly, about 5,300 Wells Fargo employees have been fired for this scheme which has been in operation since 2011 (second link). The first link describes this fraudulent insider bank operation as consisting of “pernicious and often illegal sales tactics” (first link). Think about that: this dishonest practice was knowingly and willfully perpetrated on Wells Fargo’s own customers for years, in ways which are reported as being “often illegal.” How can such breathtaking criminality not be prosecuted by the appropriate federal and state governmental agencies?

In a related story, Deutsche Bank is close to reaching an agreement for paying billions of dollars in civil penalties for its dishonest practices in peddling mortgage-backed securities to investors (third link). The third link includes Goldman Sachs, JP Morgan Chase, Citigroup and Bank of America in the rogues gallery along with Wells Fargo and Deutsche Bank of having to pay an aggregate of many billions of dollars in civil fines to government agencies for dishonest banking and financial activities. Did any of their CEOs and high bank officers go to prison for these dishonest practices? Were any of them even indicted? Apparently not.

Who would have dreamed that the problem of banker dishonesty would become so pervasive and widespread that newspapers would be printing articles on how consumers can take actions to protect themselves from being defrauded by their own banks? The final link appeared today in a USA Today insert in my local newspaper today. It is entitled “How to protect yourself from fraud by your own bank.” Amazing! Western society has become so corrupt and dishonest that such an article actually is needed! The pervasive corruptions within the world’s mega-banks coupled with the refusal of government agencies to arrest and imprison those responsible for such pervasive crimes profoundly fulfills the prophecy of Revelation 18:3 that, in the latter days, the “kings of the earth” (government leaders and those heading investigatory agencies) would be allied with the “merchants of the earth” (private sector multinational companies who do business all over the “earth”) in a mutual plot of self-indulgence where they are “waxed rich” via their corrupt insider schemes while the rest of the world’s people suffer. The first three links confirm that Revelation 18:3’s prophecy has been abundantly fulfilled in our modern items. However, the corrupt schemes and plots of the world’s private-sector and public-sector leaders will be their undoing. Revelation 17-18 prophecy that the political leaders and the heads of the private sector multinational companies will have their schemes and self-indulgent lifestyles come crashing down in a way where they are held accountable for their actions. Revelation 17 prophesies that a cryptic alliance of “seven heads and ten horns” (nations? government leaders? something else?) will angrily tear down the corrupt alliance that exists between corrupt politicians and leaders of dishonest multinational corporations with great prejudice. The current corrupt global financial/ political system is called Babylon the Great or the “Great Whore” in Revelation 17-18. Revelation17:16 prophesies this current system will be taken down with such force that it describes the seven heads and ten horns making it “desolate and naked,” “eat[ing] her flesh” and “burn[ing]her with fire.” To put this prophetic metaphorical language into terms we can understand today, it likely means exposing and laying bare the full extent of the current global system’s corruptions and criminality, stripping it of all its ill-gotten assets and installing a new global system and order (called the “beast” in Revelation 17) where the current corrupt system and its insider leaders can never rise again or escape justice.

Do not envy the corrupt insiders in either the private or public sector. Their “Judgment Day” is coming, as Revelation 17-18 prophesy, and Revelation 17:16 indicates they have a terrible fate ahead of them. For in-depth information linking the prophecies of Revelation 17-18 to today’s modern world, please read my articles: Is Babylon the Great about to Collapse…Ushering in a New Beast System? and The Babylonian Origin of the Modern Banking system.” Today’s media headlines and political developments argue that Babylon the Great’s Judgment Day is drawing ever closer.