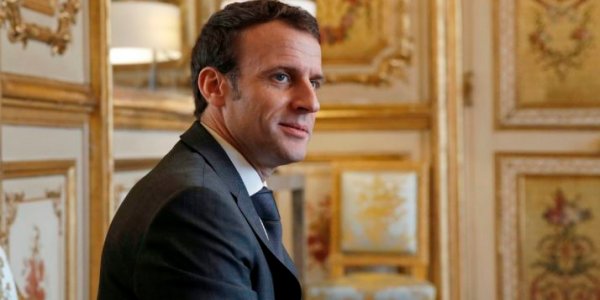 French President Macron recently publicized all over Europe an “Open Letter” which called for expanding EU powers on a variety of pan-European matters. While it was written in a carefully-parsed language, it clearly calls for expanded powers for the EU bureaucracy at the expense of the national sovereignties of the individual European nations. The first link notes that Macron is a “keen promoter of European integration,” and it details his call for the creation of new EU agencies which would have greatly expanded powers over EU member nations. Let’s examine some of the parsed words to see what is actually being proposed by Macron.

Macron is clearly worried about the growing power of nationalist/populist movements throughout Europe and how their expanded strength will be manifested in the new EU parliament to be elected this Spring. He wants a new EU agency to, ostensibly, “provide each EU member state with European experts to protect their election process against cyber-attacks and manipulation (emphasis added).” That sounds so egalitarian, doesn’t it? It gives the impression that he wants to protect all EU nations from the agents of the omnipresent Russians and hackers, doesn’t it? However, notice the specific words used here. He wants the EU Bureaucracy in Brussels to assign “European experts” to each nation to monitor its election process. Since the “experts” assigned to each EU nation would be chosen by the unelected and unaccountable bureaucrats in Brussels, I fear it is just as likely that Macron wants to insert EU controllers into each nation’s election procedures to ensure that the nationalist and populists do as poorly as possible in each election. It is only a small step from “monitoring” elections to “controlling” them by choosing who gets to program the voting machines, who has custody of the ballots after the election and who gets to count the votes. I have more than a sneaking suspicion that Macron wants the EU’s “experts” to handle all the steps of each nations’ election. Macron is a self-proclaimed enemy of nationalists, and he is on record as saying “‘patriotism is the opposite of nationalism. Nationalism is treason…” (second link). The second link focuses on the tensions between Macron and US President Trump at a commemoration event regarding War I, but notice those intensely Orwellian remarks made by President Macron. All of Macron’s remarks in his recent “Open letter” must be understood through the lens of Macron’s Orwellian plans for Europe’s future.

The first link also cites Macron as calling for a new EU agency which would control “a common border force and a European Asylum Office.” Do you grasp the ramifications of this proposed power-grab by the EU? Macron wants the EU to field its own “border force” which would, presumably, replace the border guards of all the individual EU member nations. These new EU border police would be loyal only to the EU bureaucrats in Brussels. If the EU’s border police disagreed with the border guards of Italy, Greece, Spain, the Balkan nations, etc., who would have final jurisdiction over whether new boatloads of illegal immigrants can enter the EU? Macron and the globalist EU leaders would want the EU’s border police to be able to order each nation’s border guards to surrender jurisdiction over European nations’ national borders to the EU police. If the European nations being inundated with migrants wanted to enforce the laws of their own nations, would there be an armed confrontation between the EU police and the border guards of each European nation? It could come to that if Macron and his EU cronies seek to forcibly impose the will of unelected EU bureaucrats on the border guards of each member nation. Notice that Macron also wants a “European Asylum Office” to control migration into the EU. It has galled; Macron, Merkel and the EU leaders that member EU nations have refused to meekly accept whatever numbers of migrants the EU bureaucrats in Brussels assigned to them. I think it is certain that Macron envisions a “European Asylum Office” that will have the power to order each EU member nation to accept whatever number of migrants from outside Europe that Brussels decides they should take. The third link offers a perspective on Macron’s Open Letter from DW News, a globalist German media source.

If I was a citizen of any nation in Europe, I’d be worried. It sounds like Macron wants the EU to appoint its own officials to govern each European nation like an EU colony. If EU officials seize control of every European nation’s elections, borders, migrant distributions, etc., it sounds to me, as a student of history, that these newly empowered EU officials would morph into the equivalent of new EU “Gauleiters” and the unelected and unaccountable EU would become Europe’s “Fourth Reich.” It sounds to me like Macron envisions a Europe wherein the national governments of each European nation would have no more sovereignty than did the Vichy French during the “Third Reich.”

The migrant situation has really irritated the EU bureaucrats as they apparently had convinced themselves that the member nations of Europe would docilely submit to whatever diktat came from Brussels on migrant matters. It seems the EU was genuinely shocked when several European nations ignored Brussels and acted to protect their own people and their own culture from waves of migrants who cared nothing for the culture of the nations they insisted must “host” them. Macron had not long ago recalled the French ambassador from Italy in a fit of pique, but now is trying to “make nice” with the pro-Italian government of Italy (fourth link). Italy’s new nationalist government has plans to extradite 500,000 migrants who forced their way into Italy (fifth link), and the legal framework to do so is now being shaped to accomplish that goal (sixth link). Hungary erected a secure border fence to keep migrants out, and Hungary, Austria, Poland, the Czech Republic, and Italy now have nationalist governments due to the efforts by the EU to usurp control over those nations’ internal affairs. The world’s globalists had drafted an international treaty to formalize their “open borders” aspirations, but several European nations have joined the USA in opting out of that agreement (seventh link). Nationalists/Euro-skeptics continue to gain political strength in Germany, France, the Netherlands, Sweden, etc., much to the chagrin of the EU leaders. Estonia became the latest nation to continue this trend when nationalists more than doubled their strength in that nation’s recent election–finishing a close third to the two main establishment parties (eighth link and ninth link).  We should not forget that the United Kingdom’s Brexit from the EU is due to be implemented March 29th unless some last-minute agreement creates a delay in this exit date. However, with the EU parliamentary elections barely two months away, any meaningful delay in the March 29th date would mean that the UK would still be an EU member nation as of the Parliamentary Election date and would be entitled to elect a slate of MEPs (Members of the European Parliament) from the UK. Just the thought of, Nigel Farage, remaining an MEP might keep the EU leaders from extending the March 29th Brexit deadline. If the UK is still an EU member as of the Parliamentary election date, the UK is likely to send many Brexiteers to the European Parliament–an outcome that would have the EU leaders reaching for their antacids.

There is a lot of political theater still to unfold in Europe before matters are settled, but it is becoming ever-clearer that the EU has a fundamental flaw in its current structure that cannot be fixed. The EU’s leaders are selected only by the European globalist elites, not the voting citizens of the EU nations. The elected European Parliament has little real power and is mostly a debating society. It is allowed to ratify each new EU leader, but only the insider elites are allowed to select candidates for high EU office. The fact that the EU was structured so its leaders would never be elected by any voters anywhere in Europe meant the globalist would always control the EU, but it also created a reality where the EU’s top leaders will never have much credibility or perceived right to govern. Macron, Merkel and the EU leadership seem genuinely puzzled by the nationalist urges of Europe’s voters who aren’t content to be governed “by their betters.” The EU seems to want a Europe which reverts to a Medieval governing structure wherein the globalist insiders serve as modern Dukes, Barons, etc. while all the citizens of Europe become content to be perpetual serfs.

Whatever happens within Europe, its ultimate outcome has been predetermined–not by anyone at Brussels but rather by the Creator God who governs the nations in a manner which will implement his prophetic will for our modern world–called “the latter days” in biblical prophecies. Whether the atheists and agnostics in Europe (or elsewhere) like it or not, the Bible’s prophecies are being steadily implemented in modern geopolitics and will continue to be so implemented. God challenges everyone to see his ability to fulfill his prophecies as proof of his reality and sovereignty (Isaiah 41:21-26, 42:9, 46:9-11). Of course, atheists and agnostics don’t read the Bible’s prophecies so they have no idea that they are actually fulfilling them in their actions. Psalm 2 describes God’s counsel to the kings and leaders of the world’s nations. God says he will “laugh” at the plans of mere mortals to thwart his will, and he advises the world’s “king” and “judges” to either serve God with reverence and obedience or be broken like potter’s vessels when God shatters them. The world’s leaders pay little heed to God or the Bible now because they have been deeply duped by the unscientific dogmas of evolution and a deep misunderstanding of what the Bible actually teaches about the ancient and modern world as well as its prehistoric origins.

My books, available at my website’s homepage, meticulously set forth how God has fulfilled all his prophecies about the scattered (and supposedly “lost”) ten tribes of Israel, and how God is provably fulfilling them in meticulous detail even today. I urge you to read those books to see the evidence supporting my claims. For additional information about fulfillment of biblical prophecies in modern events and an explanation of why the Bible’s accounts are the only scientific explanation for the existence of the earth and all life on it, please read my free articles, Are We Living in the Biblical Latter Days?, The USA in Biblical Prophecy, Is Babylon the Great about to Fall…Ushering in a Global Beast System, and Is the Earth 6000 years Old?