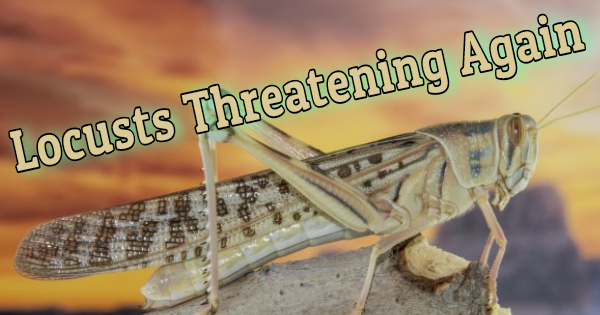 The first link is the post I wrote about the status of the locust plague when it was confined to Africa last month. It is still endangering African food supplies, but now the locusts pose a threat to the more heavily-populated Asian nations. The second link details the extent of the growing danger to crops in Iran and Pakistan, the two Asian nations currently affected the most by the expanding locust plague. Indeed, the threat to crops in Iran is now so severe that Iran is having to use the military to try and suppress the locusts’ damage to Iranian crops (third link). The second link also has a very informative map showing where the locusts are spreading in South-Central Asia, and it warns that the locusts have also now reached Afghanistan and India. Obviously, incalculable damage to food crops could be done if major locusts swarms invade the Indian croplands, and threaten the food supplies of India.  India is making preparations for a “worst-case scenario” in which the locust swarms enter India from the west, and spread eastward as far as Bangladesh (fourth link).

The fifth link is from the Israeli media, and it compares the current plague of locusts now infesting Iran to the plague of locusts which hit the Egyptians in the time of the Exodus (Exodus 10). It has a photograph of just how dense a locust swarm can become, and claims the locust plague in Iran is “the largest ever seen” and “unprecedented.” It reportedly has already caused $7 billion in damage to Iran’s crops and damaged almost a half-million acres of farmland, and the locust plague is still spreading.

This spreading locust plague is just one of several threats to the world’s food supplies. Wars and natural disasters are another threat. The coronavirus pandemic has caused great damage to the food-production and food-distribution systems of the USA, and it is not clear how soon normal food production and distribution in the USA will resume. Similar problems from the coronavirus and the resultant “lock-downs” must be affecting farmers and food distributors in other nations as well. The damage done to the meat production system in the USA was documented in a recent post of mine, and that is included in this post as the sixth link.

There is another threat that could soon pose a threat to food production abilities throughout the globe. There is a largely unappreciated correlation between sun-spot activities and climate factors on earth which cause food shortages (seventh link). Centuries ago when the world had a much less sophisticated food distribution system, these changes correlated with starvation-level food shortages in some nations. Briefly stated, a lack of sunspot activities indicates that the conditions on earth which produce such periods of food shortages could be about to recur. The link documents that we are currently witnessing a prolonged lack of sunspot activities which argue that a period of climatological threats to the globe’s food supplies could be imminent. The link documents how severe some of the food shortages were in previous centuries when this same phenomenon occurred.

Readers of this website’s posts know that we are living in the age-ending period of time called the “latter days” in biblical prophecies (see my article, Are We Living in the Biblical Latter Days?). The Bible also warns that the latter days will be an exceedingly sinful time as mankind departs from God’s revealed laws and way of life (2 Timothy 3:1-9). While the first five books of the Bible detail the covenant that God made with the original patriarchs and the Israelite peoples, expanding sinfulness can still bring God’s growing plagues and punishment on mankind in an effort to induce mankind to repent and change its ways. Droughts and food shortages were a way the Bible records God has dealt with nations in the past, and Deuteronomy 27:22-24 warns specifically about God sending plagues upon the climates and food supplies of sinful nations. Ancient peoples did not know about correlations between sunspot inactivity and food shortages on earth, but what modern climatologists know about this correlation indicates that such a time of planetary distress may now be imminent. Matthew 24:6-8 and Revelation 6:5-6 warn that food shortages and famines will be present in the latter days of our age, and once such phenomenon befalls the earth, they are likely to intensify.

Few people are paying attention to God and the Bible’s warnings at this time. However, if these conditions continue and intensify, mankind will be forced to deal with the reality of a Creator God who is beginning to directly intervene in human affairs.

I wish to express my thanks to a reader who sent me the seventh link.