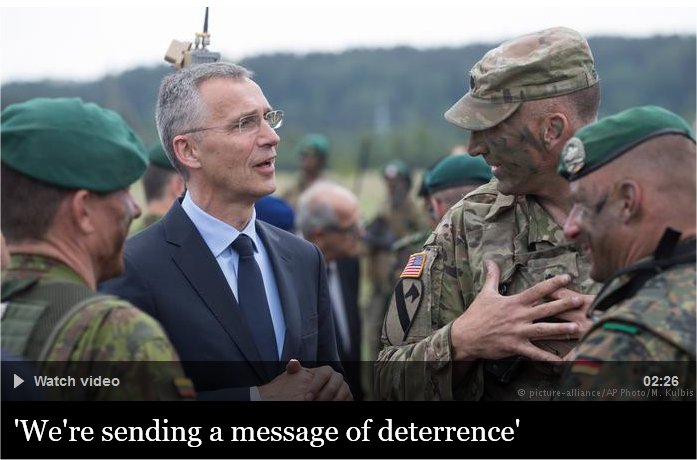 This post emphasizes NATO’s deployment of military contingents into Lithuania. The first link offers details about a German-led NATO force being stationed in Lithuania and adds that NATO forces will be regularly stationed in the three Baltic nations and Poland. Evidence that NATO has placed a high priority on these deployments is found in the second link which offers an interview with NATO Chief Jans Stoltenberg, who was personally in Lithuania to highlight NATO’s protection of these eastern NATO members. The third link mentions that the US military will be permanently stationing significant armored units in Poland and rotating different troops into and out of Poland so more US troops can train there and become familiar with Poland’s terrain in order to defend it vs. hostile attack. The link notes that US forces were given a “heroes welcome” by Poland. Given Poland’s oppressive rule by Russia for decades during the Cold War, Poland likely welcomes all NATO forces that deploy to their nation.

The Baltic region’s geography makes for a confusing situation between NATO nations and Russia. Russia has sovereignty over Kaliningrad, an enclave squeezed between NATO members, Poland and Lithuania. NATO has the right to fly warplanes between its member nations as well as sail ships to Baltic nations from NATO European ports. Russia has the same rights between Russia proper and Kaliningrad. Since Russian and NATO forces use the same spaces to make these transits by sea or air, they can easily get in each other’s way. This leads to confrontations as Russia and NATO escort or intercept each other’s warplanes and ships. The fourth link is about a Russian plane confronting NATO warplanes over Northern Europe, and the fifth link concerns tensions between Russian planes, on one hand, and Finnish and Swedish planes on the other. Finland and Sweden are not technically in NATO, but are western European nations whose forces do jointly train periodically with NATO forces. There have been periodic reports that Finland and Sweden are considering joining the NATO alliance, but they have not yet done so. Such reports anger Russia. The Baltic and Scandinavian nations are really “in the same boat,” as all are realistically threatened by no nation other than Russia. Russian war planners, no doubt, still chafe at the reality that so many former Warsaw Pact nations are now in the NATO alliance.

In a related northern European/Scandinavian development, the USA has decided to keep a force of 330 Marines in Norway (last link). This is a small body of Marines, but it also serves as another trip-wire force to deter Russian aggression and reassure Norwegians of American support. The nations of NATO are justifiably skittish about Russian intentions, given Russia’s annexation of the Crimea, its support for an undeclared war in the Ukraine’s easternmost provinces and by Russia’s deployment of military forces to the Mideast.

Given that tensions are mounting between the NATO nations and Russia in the Mideast, in the Ukraine and along the Baltic nation’s borders with Russia, there is always the possibility of a skirmish which could expand into a regional war. Hopefully, cooler heads will prevail and such a confrontation will not occur.

Readers of my blog realize that I view modern geopolitics in light of biblical prophetic perspectives. While Ezekiel 38-39 reveals that an epic World War III will occur at the very end of our age and it accurately foretold the modern nations which would be in the rival latter-day alliances, that prophecy does not preclude the possibility that regional wars will break out prior to the final great war in regions where the two rival alliances have conflicting interests. Beside the NATO-Russian flashpoints listed above, other flashpoints are found in the South China Sea, the Persian Gulf and the Korean Peninsula/East China Sea area. My perspective is that several major biblical events with specified timetables have to occur before the final Ezekiel 38-39 World War III occurs. The modern global system called Babylon the Great in Revelation 17-18 has yet to fall, the beast power which will follow it has yet to come into existence for a prophesied 42 months (Revelation 13:1-5) and God’s Two Witnesses of Revelation 11 have not yet begun their 1260-day prophesied final ministry to the nations. Since these events with their specified timetables haven’t occurred yet, I do not think Ezekiel 38-39’s climactic war is imminent. Regional wars could easily occur, however.

For additional reading on the above topics, I urge readers to review my articles, What Ezekiel 38-39 Reveal about a Future World War III, Japan’s Role in Biblical Prophecy, The United States in Bible Prophecy and Is Babylon the Great about to Fall…Ushering in a New Beast System? If you have read these articles, you will have a solid biblical perspective on pending world events