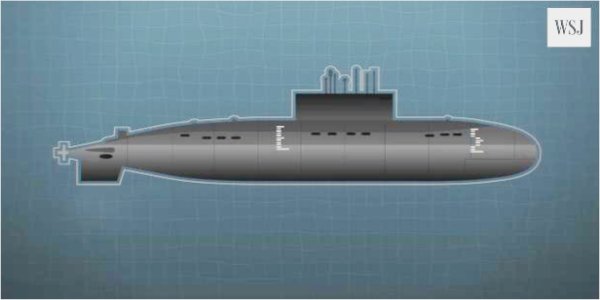 This post is intended to update readers on recent submarine actions and developments by important global navies. The first link is about a recently deployed Russian submarine that engaged with US, British and NATO naval forces in a Cold War-type “cat and mouse” game as it sailed from northern Russia through the Atlantic and Mediterranean Seas. It tried to evade detection and the NATO forces tried to determine its location at all times during its deployment. The Russian sub engaged in naval maneuvers in the Mediterranean Sea before it carried out a real-life, war mission by firing two salvos of cruise missiles into Syria to attack forces opposed to the Assad regime. This was an exercise that was being played “for keeps.” A US Navy warplane even shot down a Syrian warplane as part of this recent confrontation between the Russian and NATO navies. Did you hear anything in your media sources about this live-fire confrontation? I think Russia wanted to demonstrate that the US Navy is not the only navy that can fire volleys of cruise missiles at its opponents. Given that US President Trump had the US Navy fire 59 cruise missiles at targets inside Syria a matter of months ago, Russia surely wanted to reply with an “in kind” response. Both sides wanted to test their submarine evasion and submarine detection technologies in this naval encounter conducted under wartime conditions. The Russian submarine also wanted to demonstrate that Russian subs can fire volleys of cruise missiles from a submerged position.

Longtime readers of my blog have known that the Israeli Navy has embarked on a major program to increase that nation’s submarine fleet. The second link reports that the Israelis have contracted to have German shipyards build another three Dolphin-class submarines. These subs are diesel-powered, but they will incorporate all the modern technologies that Germany and Israel have invented for submarine warfare. There has been much speculation about the Israeli Dolphin submarines’ ability to fire nuclear-tipped cruise missiles. Personally, I think Israel has been a nuclear power for decades, and I believe the Dolphin subs can launch nuclear-tipped cruise missiles. The Israeli subs can surely conduct both strategic and tactical missions of all kinds. The addition of these three new submarines will give Israel nine of this class of modern German-built submarines. Clearly, the Israelis have a lot of faith in the ability of German industry to build modern “U-boats.” I cannot help but make a historical observation at how radically things have changed since World War II. During that war, could anyone have predicted that decades later, German industry would be building U-boats for a Jewish national navy?

The final link is about the latest American attack submarine which will be joining the fleet next year for operational deployment. Reportedly, it will be the most modern and technologically-capable submarine in the US Navy. I cannot help but be proud of this submarine as it will bear the name, USS South Dakota. That it is named after my state of residence has been a source of many local media stories about the commissioning of this new vessel. Our state is honored to have this new submarine named after the “Mt. Rushmore state.” The offensive and defensive capabilities of this ship (longer than a football field) remain classified.

The submarine fleets of the rival navies of the western- and eastern-bloc alliances surely have capabilities that would make us marvel if we knew about them. They may also have unexpected vulnerabilities. The 2015 book, Ghost Fleet, by P.W Singer and August Cole, a novel about a future war between the USA and China, raises the prospect that satellites can track the locations of nuclear submarines by detecting a unique kind of radiation emission from nuclear subs that can be tracked from outer space. Diesel-powered subs do not emit any such radiation and cannot be tracked in the same manner. Is there any connection between that possible vulnerability and the decision by many modern navies to use diesel-powered submarines instead of building nuclear-powered vessels? If so, I hope the US Navy has devised a way to defeat any such satellite-tracking of US nuclear-powered submarines.

The latest live-fire naval confrontation between western- and eastern-bloc navies presages what will happen when these fleets actively go to war against each other in an age-ending World War III prophesied in Ezekiel 38-39 to occur between two rival global alliances. Long-time readers of my blog know that Ezekiel 38 accurately predicted which nations would be in the eastern-bloc alliance that will initiate World War III via a Pearl-Harbor-like surprise attack against the NATO nations and their global allies when they least expect it. The end-time destinies of  Russia, China, Iran, Pakistan, India, Japan, the USA and its NATO allies are all revealed in this key biblical prophecy. That it accurately predicted which nations would comprise each alliance should make us take this 2500 year old prophecy seriously. Only a Creator God could inspire a prophecy about our time that long ago and bring it to pass in the latter days of our age (Isaiah 41:21-26 and 46:9-11). For a detailed examination of Ezekiel 38-39’s revelations about events that will shake our planet at the end of our age, please read my articles, What Ezekiel 38-39 Reveal About a Future World War III, Japan’s Role in Biblical Prophecy and Are We Living in the Biblical Latter Days?