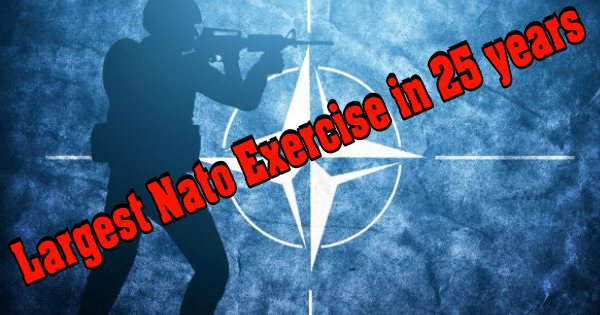 NATO is in the process of beginning a very large military exercise. It will feature the “largest component of U.S. forces deployed to Europe in the last 25 years,” and it is a test to see how quickly the USA can send a major armored force to Europe to assist its NATO allies in the event of a war (first link). It will include 37,000 military personnel and the movement of 20,000 pieces of military equipment with exercises being held in eight NATO nations. The second link states the exercise will last through June and will test how quickly and efficiently 20,000 US soldiers can be deployed to European NATO nations as well as test their interoperability with other NATO military forces once they arrive in Europe. Another 17,000 troops from 18 NATO nations will also participate in the exercise. It reports military exercises will be held in eight NATO nations including Poland, Germany, and the Baltic nations, although the wording of the link indicates Poland will be the key locus for the military exercise. Obviously, Russia will be watching this exercise with keen interest as the only really large threat for NATO would be an attack from Russia.


It has been a very long time since there has been a real test of the viability of sending a major convoy with military equipment from the USA to Europe. I’m sure all readers have seen many war documentaries about how German U-boats preyed on Allied convoys during World War II and sank many Allied merchant ships until effective counter-measures such as sonar were developed. The third link relates that this exercise will involve moving 1.3 million square feet of military equipment and that it will include “simulated adversarial transit exercises” as the ships move across the Atlantic Ocean. In other words, they will be doing intensive testing of NATO’s anti-submarine warfare capabilities. That will be doubtless as realistic as possible because the Russians have many submarines that would be deployed into the Atlantic Ocean to stop such convoys in the event of war. Undoubtedly, some NATO navies will contribute their own submarines to mimic Russian submarines as much as possible while they simulate “attacks” against the convoy to see if American and NATO navies can detect and intercept them. The third link also highlights one area of likely problems to be tested in a realistic exercise in order to resolve problems now before a war occurs. It mentions that ship-to-ship communications, are lacking among some of the vessels to be included in the exercise. While the US Navy has standardized frequencies and communications systems throughout the fleet, many of the vessels transporting the military personnel and equipment are not technically part of the US Navy. These transport vessels will be transport vessels temporarily assigned to military duties, just as would occur in an actual war.


The key ship in protecting this test convoy will be the USS Dwight D. Eisenhower, one of the US Navy’s largest carriers. It will be accompanied by two cruisers, three destroyers and an unknown number of American submarines (fourth link). This link states that the US Army’s 1st Armored Division is going to be relocated temporarily to Europe for the exercise, and it includes a photograph of massed US armor being assembled for the exercise. In just this one photo, there appear to be approximately 100 M1 Abram tanks and 150 Bradley Fighting vehicles along with other armored vehicles waiting to be loaded on their transport ships. This link also reports that last September, Russia practiced their own military exercise by sending ten Russian submarines to the North Atlantic to practice intercepting and sinking NATO vessels like the ones that will be shipping the 1st Armored division across the Atlantic Ocean to Europe. It also reports that in a previous exercise, the US Navy tested the readiness of vessels in the Ready Reserve fleet. It tried to activate 33 of 66 available ships and only 22 of those 33 ships could be readied to leave ports on actual missions. I’m actually surprised that 2/3rds of the 33 tested ships could be quickly brought into service as I think that is a good percentage for a “snap test” of the ships’ readiness.


In a related story about the US Navy, the fifth link describes (and shows) a problem with the outer “stealth” surfacing that surrounds the hull of a newer US submarine (my thanks to a reader for sending me this link). In another item, some readers may be aware that US President Trump has called for expanding the active-duty US naval fleet to 350 vessels, which seems logical and overdue to me. However, the sixth link reveals that the funds to build the needed additional ships are not included in the recent US military budget. It does no good to be in favor of building more naval warships if the funding for them is not included in the budget.


I commend the military for conducting this large-scale military exercise to test the ability of the USA to send large numbers of troops to the NATO nations in Europe. Such a test is necessary, and it will surely reveal shortcomings in the current battle plans and in the coordination of the military forces of the NATO nations participating in it. After the naval portion of the exercise is completed, the army forces transported to Europe will be busy for some time conducting ground combat exercises–most likely in Eastern European nations. It is obviously far better to learn what needs to be fixed or improved now in a major exercise than to find it out about such problems only under actual combat conditions.


Will such a wartime operation ever be needed in the future? I suspect the answer is yes. The Bible’s prophecies about the latter days include many which foretell the latter days will be a time that concludes with another global world war. The United States of America and the NATO nations will be heavily involved in that final world war, and the damage and casualty rates are prophesied to be breath-taking. Indeed, Mathew 24:21-22 prophesy that unless Jesus Christ’s Second Coming was to occur, to cut short the fighting, there would be “no flesh” left alive. To see abundant evidence that we are living in that prophesied time, please read my article, Are We Living in the Biblical Latter Days? Biblical prophecies do not mention the “United States of America” by its modern name, but the Bible does mention and identify the USA in its prophecies. While my books on the history of the ten tribes of Israel (available at the homepage of this website) reveal the full history and identities of many modern nations, you can see the main points by which the USA can be identified in biblical prophecy in my article, The United States of America in Biblical Prophecy. The Bible actually reveals many details about the final world war that lies in mankind’s future. You can see a comprehensive examination of these prophecies in my article, What Ezekiel 38-39 Reveal about a Future World War III. While Ezekiel 38-39 is the key prophecy about this final World War III, there are many other biblical prophecies that add additional details about this final war and they are also included in this article’s content. If you read this article, you will be surprised how specific many of the Bible’s prophesies really are!