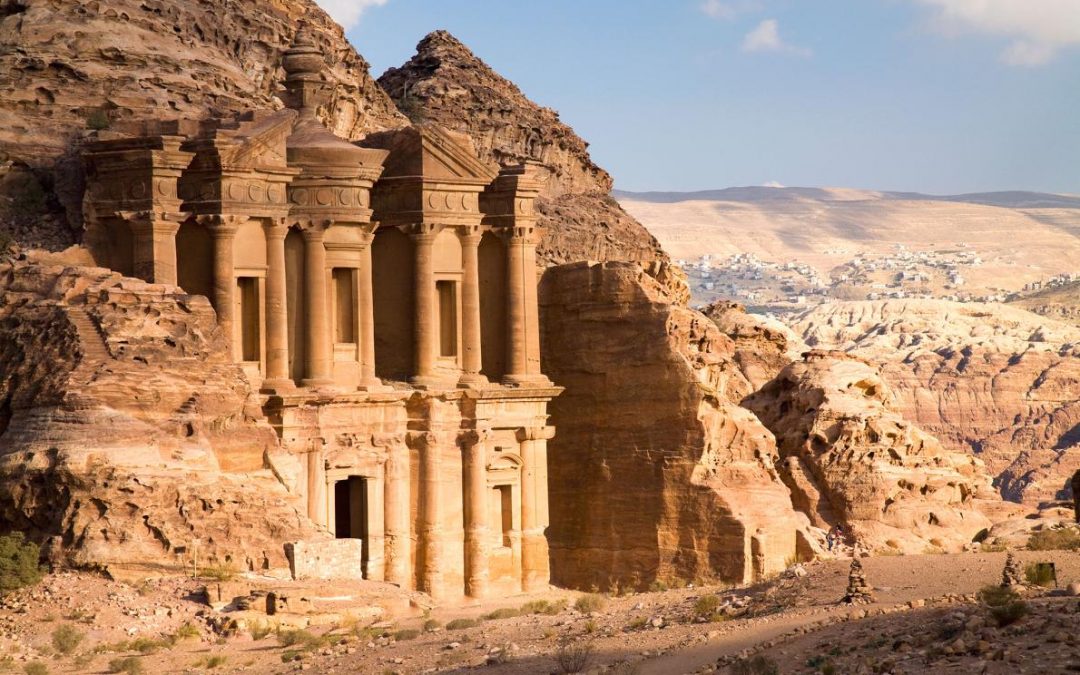 This post involves a new archaeological discovery which I think readers will find of interest. A large, buried platform structure has been found at the Petra complex in modern Jordan. It is rather large to have been overlooked for so long as it is roughly twice the size of an Olympic-size swimming pool. It was overlooked as it was long buried in sand, but satellite photos discovered the shape of the buried platform structure, and aerial drones confirmed its presence. Its original purpose is unknown. The first link and second link provide two descriptions of the new find.

It is thought that the newly-discovered ancient platform dates to the Nabataean civilization which began in the 4th century BC, although the construction of the as-yet unexcavated and identified ancient platform is thought to date to a time in the second century BC. The Nabataean civilization flourished for a time in the region near the old Promised Land in which the ancient biblical kingdoms of Israel and Judah were once located. The region including Petra was ruled by Kings David and Solomon during the time of the United Kingdom of Israel. After the split of the Israelite tribes into the two separate kingdoms of Israel and Judah, the region around Petra would have periodically been ruled or dominated by the kingdom of Judah, which experienced resurgences in power and scope during the reign of its righteous kings. It should be pointed out; however, that the famous ancient structures at the modern Petra site would not have existed during the time of the Israelite kingdoms of Israel and Judah. The Nabataean civilization came into being after the province of Judea was founded in the old Persian Empire during the time when remnants of the tribes of Judah, Benjamin and Levi returned to Jerusalem and its environs under the leadership of Ezra and Nehemiah in the 5th century BC (Ezra 1-2). The Judeans that resettled the region of Jerusalem and part of the old Promised Land certainly knew about the Nabataeans and likely traded with them as they lived in the same region of the Mideast.

So we have an ancient mystery. What was the purpose of the newly-found, buried structure in the Petra region? Was it built by the Nabataeans or does it date to a time period after or before them? For answers, we will have to wait until the ancient platform site is unearthed and examined in an archaeological expedition. Given the popularity of the structures still in existence at Petra as tourist attractions, I doubt there will be a difficulty in raising funds for such an expedition.

The discovery of this ancient platform site by satellite technology raises an interesting point. Satellite photography can locate buried and/or forgotten ancient structures (or entire lost cities) about which modern mankind has no knowledge. These ancient discoveries can be buried under desert sands, encased inside impenetrable jungles or hidden in mountain ranges. I enjoy watching a cable-TV program called “What on Earth?” on The Science Channel. This series examines ancient or mysterious structures or formations on the surface of the earth which have been discovered by satellite technology. The final link offers information about this series of programs. Obviously, these programs reveal to the general public newly-found ancient structures, cities, etc. that the governments or entities owning the satellites are allowing the public to see. I can’t help but wondering what ancient structures or artifacts have been found by modern satellites which the public has not yet been allowed to see or about which the public has no knowledge. It may be that some of those unrevealed discoveries would be very interesting, indeed.