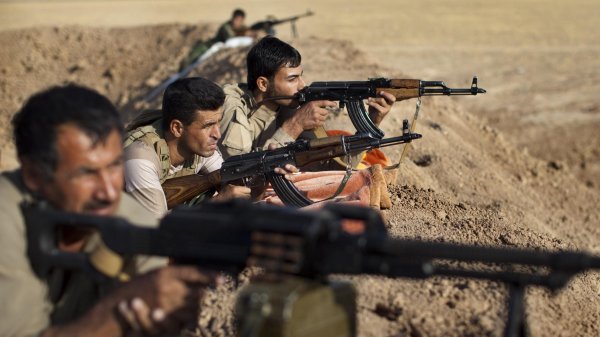 An important development has occurred amidst the Mideast chaos which features shifting alliances and allegiances. The first link and second link report that Syrian Kurdish fighters who successfully defended the city of Kobane with US air support have allied themselves with several elements of the Free Syrian Army (Sunni rebels fighting both ISIS and the Assad regime) as well as with the armed militia of the Assyrian Christians (a Mideastern Christian denomination). That Sunni Muslim and Christian militias have become allies is a remarkable development. This alliance may have been stimulated by the Russian intervention in the region to bolster the Assad regime. The first link notes that Turkey is not likely to be thrilled with this new alliance as it gives the Kurds important new allies. However, all Christians around the world ought to be cheered that imperiled Christian militias in the Mideast now have capable Islamic allies.

The USA, Saudi Arabia and Turkey all want to topple the Assad regime as do various Sunni rebel groups within Syria. The third link reports that the USA has airdropped 50 tons of ammo, grenades, etc. to the Syrian Sunni rebel groups and to the Assyrian Christian militias. Curiously, the third link adds that the USA did not airdrop these military supplies to the Kurds. That is very odd as the Kurds have been the best allies the USA has had on the ground against ISIS. Why such a bizarre US policy? Apparently, the Obama administration doesn’t want to offend Turkey’s autocratic leadership which seems to have a vendetta against the Kurds. This semantic exercise may only be a “distinction without a difference.” Air-dropping military supplies to the Sunni rebels and Assyrian Christian militias almost certainly assures that some of these military supplies will go to Kurdish fighters as well as all three groups are now in the same alliance. I don’t understand the reluctance of the Obama administration to openly help the Kurds in a major way. The Kurds have so far been the only truly effective ground force against ISIS and they deserve America’s open and major support.

As further evidence of ISIS’s grossly evil nature, the fourth link reports that ISIS is now cutting off ears of people within their areas of jurisdictions and asserting that once a non-Muslim woman is raped by ten Islamic Jihadis she “qualifies” as a Muslim. The last link reports that ISIS has even made a wild, hubristic threat about beheading President Obama. It also includes a discussion of the prophetic expectations of ISIS which motivates their monstrous actions and intents. Apparently, ISIS has an “end-times” prophetic expectation of its own which it purports to be fulfilling. Their very radical Islamic perspectives do not justify their crimes against humanity, but it may assist readers in understanding why they are so vehement in their beliefs and why it is so important to defeat them…as soon as possible.

The Kurdish-Syrian Sunni rebel-Assyrian Christian alliance is the latest development in the ever-changing Mideast panoply of alliances and enigmatic actions. The dictum, “The enemy of my enemy is my friend,” seems to be guiding many actions in the Mideast at present.

These horrific circumstances in the Mideast are creating alliances and partnerships which would have been thought impossible not long ago. However sinful and atrocious the actions are, God is exercising overall guidance of the nations and groups so they are ultimately shepherded into the opposing alliances prophesied in Ezekiel 38-39. My articles and posts have made it clear that Iran and the Taliban-dominated regions of Afghanistan and Pakistan are prophesies to be in the “latter day” Gog-Magog alliance. Indeed, given that Pakistan’s central government has allied itself with China in the big Gwadar port project and overland supply corridor from Gwadar through Pakistan to China, it argues that all of Pakistan and Afghanistan will eventually be in the Gog-Magog alliance. Conversely, no nation descended from Abraham is prophesied in Ezekiel 38 to be in the Gog-Magog alliance led by Russia, China and Shiite Iran. The Arab Sunni nations are descended from Ishmael, the son of Abraham and Hagar, and Turkey and other nations are dominated by the descendants of the Edomites, who are the descendants of Esau, the grandson of Abraham via Isaac (Genesis 36:1). The Israelis/Jews are the descendants of the Israelite tribe of Judah, just one of the thirteen tribes which descended from Jacob, also Abraham’s grandson via Isaac. The Jews are a small Israelite tribe in the modern world. The much-bigger modern nations descended from the northern ten tribes of Israel are the USA, the British nations, many European and NATO nations, etc. You can see some of the evidence for the USA being in that category of nations in my free article, The USA in Bible Prophecy. The history and modern whereabouts of each of the many tribes of Israel descended from Jacob can be found in my 4-book set on the migrations, empires and modern locations of the ten tribes of Israel and also in my E-book, The “Lost” Ten Tribes of Israel…Found!, all of which can be ordered via my homepage. My books utilize both biblical narrative and prophecies as well as copious amounts of documentation from secular historical writers from Greece, Rome, ancient India, etc. Potential readers can click on the link underneath each cover photo of the 4-book set and read a sample text from each book.

If you read these books, you will have insights into how the conflicts and alliances of the modern world are, in many cases, continuations of ancient alliances, promises and enmities that existed from biblical times to the present.