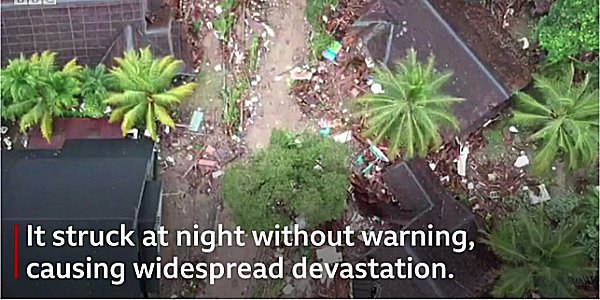 The “Rim of Fire” in the Pacific Ocean’s earthquake/volcano region has been more active in 2018. The latest volcanic eruption took place a few days ago at a very famous location–the place where an 1883 volcanic eruption blew apart an entire island and spewed so much ash into the atmosphere that it killed tens of thousands of people, lowered global temperatures, created spectacular reddish sunsets in the Northern Hemisphere, etc. The 1883 eruption in this same location was one of the most famous and destructive volcanoes in known world history. In English, this location is called Krakatoa, but it is known as Krakatau in Indonesia.

The first link, second link and third link (from Arab, German and English media) offer details about this very recent Krakatoa eruption, which was far smaller than the 1883 event. It is thought that an underwater landslide accompanying the eruption caused an unexpected tsunami which killed at least 220 people and injured over 800. The death toll is expected to rise. The fourth link offers vivid footage of the eruption taken from an airplane, and the fifth link offers dramatic video of the tsunami plowing over the stage of a rock concert that had no warning of the lethal wave’s arrival. The sixth link offers information about other volcanic eruptions that have occurred recently in Indonesia, Guatemala, Hawaii and also in Tanzania and Iceland (both of which are outside the Pacific Rim of Fire’s region). Of course, earthquakes are common in the Ring of Fire as well. In September of this year, a major earthquake in Indonesia killed over 800 people and devastated a city (seventh link). It also caused a tsunami.

The final link documents the massive loss of life, the colossal effects and the global atmospheric/weather phenomena caused by the famous 1883 Krakatoa eruption. It was actually a series of eruptions, one of which was reported to be the “loudest sound heard in historic times.” It was heard 1,930 miles away in Perth, Australia and on an island near Mauritius in the Indian Ocean 3,000 miles away it sounded like a cannon had been fired nearby. It is hard for us today to even imagine such a loud sound. But even that was not Krakatoa’s greatest eruption. The final colossal eruption was estimated to reach an incomprehensible 310 dB, loud enough to rupture sailors’ eardrums 40 miles away and it caused an unimaginable pressure wave which was registered on barographs all over the world. Indeed, the pressure wave is recorded to have “rounded the globe three and a half times.” It is estimated that it could have been heard 3,100 miles away! For those of us in North America that would be approximately the distance from Los Angeles to Nova Scotia, Canada. This is powerful beyond our imagination. It also spewed so much ash into the atmosphere that it lowered the temperatures in the Northern Hemisphere by an estimated 2.2 degrees Fahrenheit.

Now I’d like to draw your attention to a moving graphic on the right-hand side of the last link as you scroll down. It shows the changing height of the volcanic Krakatoa island which emerged from the sea at the location where the former Krakatoa island blew itself apart. It shows the geography of the island in 1880 and shows how the post-eruption map unfolded. The volcanic cone of a new Krakatoa island was only 9 meters high in 1927, but it reached 300 meters high in 2005. This confirms that there are tremendous forces from within the earth that are pushing this same spot upward again. Just as an ongoing volcano in Hawaii tends to erupt in a more major way at the same location periodically (as it did in 2018), could the same thing be true of the Krakatoa location? Was the eruption a few days ago all that will occur or was it a precursor to a future more momentous blast? Indonesia is a particularly famous location for major earthquakes. In 1815, the Tambora eruption within modern Indonesia killed over 71,000 people and may have been an even more intense eruption, than the Krakatoa eruption in 1883.

Is the above just a collection of historical and modern factoids or is a major new trend beginning to emerge? In Matthew 24:7, Jesus Christ prophesied that there would be “earthquakes in various places” in the latter days that would precede his Second Coming. The term “earthquakes” would surely include other forms of tectonic activity like volcanoes. Luke 21:25 records that in the same discourse, Jesus Christ also prophesied the latter days would witness “the sea and waves roaring.” This prophecy would be fulfilled by an upswing in tsunamis and hurricanes. The world witnessed a terribly destructive tsunami in 2004 in the Indian Ocean which killed over 200,000 which was caused by an undersea earthquake. Can you imagine the effects a Krakatoa-scale volcano would have on the earth today? The death toll would be terribly high and the global effects immense. How much modern technology would be disabled by such an unexpected global pressure wave? How would it affect global air travel? What if we experienced several such volcanoes simultaneously?

Modern society is so absorbed in its daily rhythms that it pays no real attention to the spirit world or the divine power of a Creator God. However, during the latter days, mankind will experience powerful divine intervention, and it will terrify mankind. Isaiah 40:15-17 states that in God’s eyes, “the nations are as a drop in the bucket, and are counted as the small dust of the balance,” and Isaiah 40:22 adds that the inhabitants of the earth are as intrinsically insignificant as “grasshoppers” in God’s eyes. Isaiah 24:18-20 prophesy that the time will come when “the foundations of the earth do shake,” “the earth is utterly broken down…(and) moved exceedingly” and  that “the earth shall reel to and fro like a drunkard.” The phrase “in that day” in verse 21 indicates this prophecy is for the time of the end when the latter days give way to the “day of the Lord” just prior to the millennial reign of Jesus Christ (the Messiah). In Isaiah 2:19-21, a prophecy for this same prophetic time foretells that God will “shake terribly the earth.” This sounds like a global seismic event where all the tectonic plates on the earth’s surface move at once. This would cause unimaginable volcanoes and earthquakes. What could cause such a global catastrophe? Revelation 8:8-10 gives us one possibility. It prophesies that a heavenly object looking like a “great mountain burning with fire” would strike the sea in the latter days. This sounds like a meteor as depicted in the movie, Deep Impact, (where it hit the ocean off the eastern coast of the USA.) Verse 10 also speaks of a “great star from heaven, burning as it were a lamp, and it fell upon the…rivers.” This language seems like it describes how a comet would appear as it impacts a landmass somewhere on earth. These types of events could cause the earth to wobble on its axis as prophesied in Isaiah 24:20. These prophecies indicate the earth will be nearing an Extinction Level Event at the end of our age. Indeed, Jesus Christ also prophesied in Matthew 24:22 that “all flesh” would perish unless divine intervention occurred.

I’m not predicting that these prophesied events are about to occur. However, they are prophesied to occur at the end of our age, and none of us knows how soon that God will determine our age has reached its end. Knowing from history that the 1983 Krakatoa eruption suddenly affected the entire planet, and hearing that its growing volcanic cone has erupted again made me think of the above prophecies. We all need to take these prophecies seriously. If we live long enough, we will see them happen because we are now alive deep into the prophesied latter-day period of time. For confirmation of that assertion, please read my free article,  Are We Living in the Biblical Latter Days?