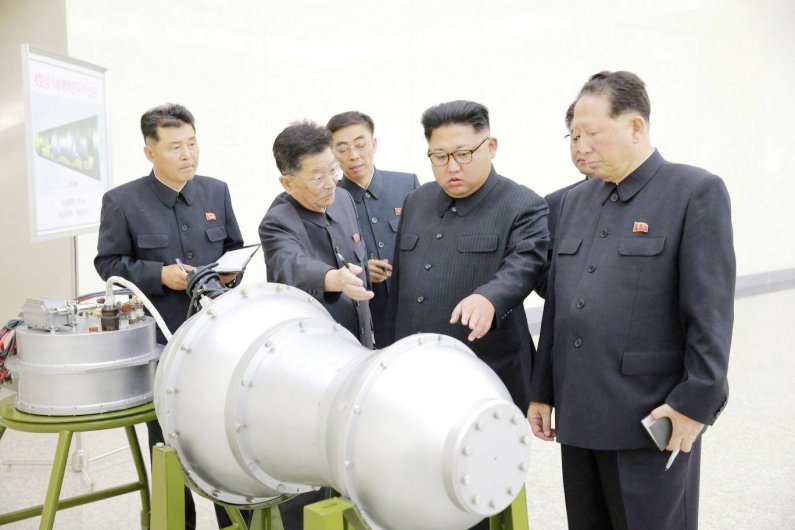 Former US Secretary of State, Henry Kissinger, has warned that South Korea and Japan will obtain nuclear weapons if North Korea is allowed to keep their nuclear warheads. In the first link, he is quoted as saying that if North Korea keeps its nukes, then “nuclear weapons must spread in the rest of Asia (emphasis added).” This is a very serious warning, and I couldn’t agree more with Dr. Kissinger on this matter. What it means is that if North Korea is allowed to keep its nuclear weapons, then the global Nuclear Non-Proliferation Treaty is going to be flushed down the toilet by all nations, and there will be a mad rush by many nations to build nukes as quickly as possibly–either openly or secretly.

Henry Kissinger is getting well up in years, but when he offers pronouncements or advice on world issues, the world’s leaders and insiders do listen. Some think Dr. Kissinger is the senior US diplomat with a very long and cogent view on world history. Others think he is the gray eminence of the insider cabal that runs the world (or is trying to do so). Those two views are not mutually exclusive, I would point out. At any rate, I wanted to inform readers of Dr. Kissinger’s statement as I think this is as close to a “war warning” as we have so far seen regarding the North Korean crisis. US President, Donald Trump, is on a very important visit to Asian world nations and the North Korean crisis is surely high on the agenda at every stop. I also think Dr. Kissinger’s statement was a warning to China. It indirectly says: “get your little attack dog under control or the world will do it for you.” Indeed, if the price of North Korea keeping its nuclear weapons is that “the rest of Asia” gets nuclear weapons, that means Taiwan will surely develop and deploy them too. Besides South Korea and Japan, Taiwan, Australia, Indonesia, Singapore and other currently non-nuclear Asian nations will have every logical reason to obtain them if a rogue nation like North Korea is allowed to keep them. If China is made to realize that Taiwan will obtain nuclear weapons if North Korea keeps any of their nukes, then the price for China to allow North Korea to keep nuclear weapons may be too high. I doubt China wants Taiwan (or Japan) to have nuclear weapons aimed at Beijing, major Chinese military bases and the Three Gorges Dam. I think the logic of Dr. Kissinger’s warning is inescapable. If China’s little attack dog, North Korea, can have nuclear weapons pointed at the USA, then the USA has every right to have its allies armed with nuclear weapons and have them all aimed at China.

Indeed, if “the rest of Asia” obtains nuclear weapons, why would the rush to build nuclear weapons stop within Asian regions? My previous posts have documented the Iranian-North Korean cooperation on weapons and missile projects. Saudi Arabia, Turkey and Egypt will surely want to obtain nuclear weapons if Iran gets them. I’m sure Israel already has them. The second link (from four years ago) reports that Saudi Arabia can likely obtain nuclear weapons from Pakistan whenever it deems it necessary to do so. South Africa, Argentina and Brazil are BRICS nations that would likely have the means to build them also. What about Europe? If North Korea and Iran get nukes (with Iran having missiles that can reach European cities), then a host of European nations will likely want to build them as well. Do you think Russia wants NATO nations like Poland, Italy, Germany, Sweden, Spain, etc. all building nuclear weapons that can hit major Russian cities and targets? This may be the global reality that is only a short time away if North Korea is allowed to keep its nuclear weapons that it proclaims it is going to fire at the USA. If North Korea, God forbid, actually fires a nuclear weapon at the USA or Guam, it is entirely possible that President Trump will show the world what happens when a superpower gets really angry. North Korea would almost surely effectively cease to exist. To the extent Iran helped North Korea build its nukes and ICBMs, then Iran can expect to be on the receiving end of the American retaliatory strike as well. Other nations which helped North Korea build any nuclear weapon fired at the USA would also be justified targets for US retaliatory strikes.

Americans are currently torn by domestic divisions. However, an attack by North Korea on the USA with nuclear weapons would unite Americans immediately in a desire for revenge. Americans absolutely hate being sucker-punched or attacked without any cause. Remember the slogans that have united Americans in our national history? They include:

In each case, giving Americans a cause to rally around united them to go to war and go conquer someone. In the three cases cited above, the conquered “someones” were Mexico, the Spanish Empire and the Japanese Empire. All were crushed by angry and retaliating American military forces. If North Korea, God forbid, sends a salvo of nuclear-armed ICBMs at the USA and one of them gets through American defenses and hits a US city, there may be another angry slogan that will go down in world history books as provoking the USA into a vengeful retaliatory war. If there is a nuclear attack which hits a West Coast city, we may have Americans going to war with the battle-cry of “Remember San Francisco” (or some other city) on their lips. Not long ago, a post I wrote included the biblical prophecy that “Jacob …[is God’s] battle axe and weapons of warfare: for with you will I break in pieces the nations, and with you will I destroy kingdoms.” Readers of my books know that the USA is the leading modern nation descended from the ten tribes of Israel (the eventual name of “Jacob”). For those not familiar with this biblical identification (which is supported by secular historical evidence), please read my free article, The USA in Bible Prophecy. If the USA is hit by a nuclear weapon, North Korea will feel a nuclear “battle-axe” hitting its nation. They may not be the only nation to feel that American “battle-axe” being swung in retaliation.

I hope readers can see how serious this situation has become. Time is running out for a peaceful solution to the North Korean crisis. Someone needs to convince the leader of North Korea that if he fires nuclear weapons at US soil, he is committing personal and national suicide. Because he has repeatedly threatened to fire nuclear weapons at the USA, he cannot be allowed to keep them. The USA (and its allies, South Korea and Japan) cannot live under indefinite future nuclear attack threats. One way or another, that threat is going to be removed.