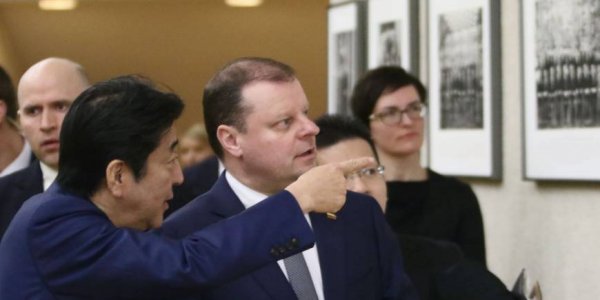 In a major state visit, Japan’s Prime Minister Shinzo Abe visited six European nations. All were in Eastern Europe. The American media seem to have ignored it, but this post will offer readers several reasons why it was a very important visit and it will offer an additional probable reason for the visit which is not covered in these links. The American media are, regrettably, fixated almost entirely on the political soap operas inside Washington, DC, and they do not cover so many stories of importance from around the world. Major events and trends are gathering force in world geopolitics to which Americans are largely oblivious. I will observe that I am steadily paying less attention to American media and more to foreign media sources to ascertain important global geopolitical developments.

The first link, second link and third link offer varying perspectives on Abe’s visit to the six eastern European nations of Latvia, Lithuania, Estonia, Bulgaria, Romania and Serbia. Japan is a mercantile nation which must continually find and strengthen its export market relationships. The links focus on Japan’s desire to foster and improve its trading relationships with European nations, and to counter what will be the growing influence of China as it finishes and expands its ambitious plans for a new global “Silk Road” which will include direct and rapid transit of goods between Europe and China. As a trading nation, Japan must take steps to make sure that it retains its current European markets and expands into new ones as well. National defense is another reason for Abe’s visit. He reportedly wants to solidify European support for maximum pressures on North Korea to rid that nation of its nuclear weapons, and the second link also reports Japan’s desire to strengthen its ties with the NATO nations. All these are good reasons for making such a state visit to Europe. However, allow me to focus on an aspect of his visit that I think reveals another motive for this trip–which was unspoken for political reasons.

I think another motive for Abe’s trip to Europe is revealed by his choice of nations visited. Did he visit the major European nations of Germany, France, the United Kingdom or Italy? No. Did he visit the offices of the European Commission in Brussels? No.The only nations which he visited were located in Eastern Europe–an Eastern Europe which is becoming increasingly restive under the diktats of the EU and which has taken initial steps toward a possible split with the EU’s nations in Western Europe. About a month ago, I posted about trends that the EU is splitting into eastern and western blocs. The EU’s demands that Eastern European nations accept “their share” of Islamic and other refugees which are pouring into Europe is one major factor causing this growing split. The EU bureaucrats sit in their out-of-touch offices and decide what is each European nation’s “fair share” of the Islamic and other immigrants coming into Europe. The Eastern European nations did not consent to a tidal wave of outside refugees being brought into Europe and their position essentially is: “you let all these immigrants into Europe, you can keep them” and “You didn’t ask our opinion on what our ‘fair share’ should be and we do not accede to your dictatorial demands on how many of your unwanted immigrants we must take off your hands.”

As I pointed out in my previous post, the Eastern European nations have formed their own sub-caucus within the EU called the “Three Seas Initiative” or the “Trimarium Group.” This group consists of twelve Eastern European nations which excludes the Western European EU nations. Its founding was led by Poland and Croatia, and it mostly consists of the former Warsaw Pact nations that were under Russia’s heel during the Cold War. Now that they are free and their national sovereignty has been restored, they have no desire whatsoever to ever again be under the domination of Russia to the east or the domination of Germany and the EU to the west. The fourth link offers an excellent and insightful analysis of the politics behind the Three Seas Initiative, in my judgment. Both the fourth link and fifth link discuss the fact that President Trump and the USA are already forming strong ties to the nations of Eastern Europe via the Three Seas Initiative and President Trump even attended one of their group’s formal meetings when he was in Europe. Europe is currently very dependent on Russian energy supplies and the USA would like to replace Russian energy with US Liquid Natural Gas (LNG) exports, and Poland wants to be the import hub through which American energy supplies are shipped throughout Europe. As readers of previous posts have seen, Poland is barely in the EU due to high tensions between it and the EU’s rulers. The Visegrad Four nations of Poland, Hungary, The Czech Republic and Slovakia are developing ever more strains between them and the EU’s rulers. Anti-EU nationalist and populist parties are rising in strength all over Europe.

As a nation dependent on global exports to make its economy function, Japan is keenly aware of all global trends and developments that affect world trade, and it sees what is happening inside Europe. While Japan has an overall trade deal that was negotiated via Japan and the EU, Japan realizes that if the Three Seas Initiative nations break away from the EU in a bloc, Japan will suddenly not have any trade agreement in force with any of its trading partners in Eastern Europe. I think one unspoken motive for the visit of Japan’s Prime Minister Abe to the six eastern European nations is to make preparatory arrangements for a new trading agreement with the Eastern European nations if they break away from the EU in a bloc. The USA is already close to the Eastern European nations under President Trump and Japan is a very close ally of the USA. I think Japan is taking some advance steps to make sure it “gets part of the action” in the event of a break-up of the EU into separate blocs.

The above highlights how fragile the EU has become as a coherent institution. I am admittedly surprised at how tone-deaf the EU is to its member nations. The EU does not want its leaders elected by Europe’s people or accountable to them and it insists on governing autocratically instead of democratically. That makes the EU steadily more precarious in its current alignment. The EU is close to driving Poland out of the EU. If Poland departs, it almost surely will not depart alone. If the Eastern European nations depart the EU, they will find eager trade partners in the USA, the UK and Japan.

This does have implications for the fulfillment of biblical prophecy. Revelation 17-18 foretells that the current globalist world system will collapse suddenly in the latter days of our age. Revelation 18:3 reveals that this globalist system exists to benefit the insiders of the governmental and global business elites which created this system. Something will happen in the future that sets in motion a cascading series of events that collapses the current political/economic/monetary systems of the world. One possibility is the collapse of a major global currency. Due to counterparty risks, the collapse of any major currency would quickly lead to chaos and crisis in all global monetary, mercantile and derivative markets. If the EU splits apart, it is hard to see how the Euro currency could long survive in its current form. In an acrimonious divorce, nations leaving the EU will likely renounce the Euro and return to their own national currencies. If the Euro collapses, it could quickly set off a chaotic collapse of many global financial institutions we now take for granted and this could fulfill Revelation 17-18’s prophecy. In a global panicky monetary crisis, the interconnection of all global markets in today’s digital networks could lead to all of them collapsing within an hour.Think of it as a prophesied global “flash crash” which cannot be reversed. Interestingly, Revelation 18:10, 17 and 19 all prophesy that the collapse of the current global world system will occur within one hour. Such a prophecy could not possibly have been fulfilled literally until the creation of today’s digitally connected world markets. Keep in mind I’m not predicting this has to be the way Revelation 17-18 will be fulfilled. I am simply pointing out one of the alternative ways that this prophecy could be fulfilled.

For more in-depth examinations of the biblical prophecies about this future world crisis and why Revelation 17-18 refers to our modern financial system as “Babylon the Great,” please read my articles: Is Babylon the Great about to Fall…Ushering in a New Beast System? and The Babylonian Origin of the Modern Banking System.