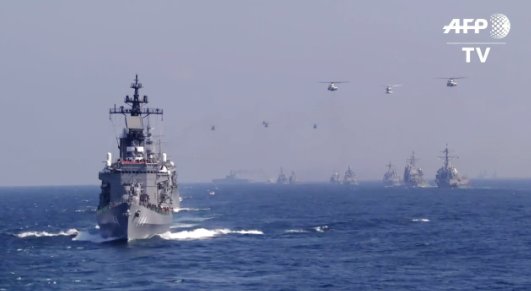 The USA, Japan and their allies conducted a major show of naval power which was, obviously, intended to send China a message and a warning about provoking a war in the South China Sea (or anywhere else). The first link states that 36 warships from at least six nations participated in the naval exercise/review. The naval review was staged near Tokyo Bay so it would seem one of the intents of the exercise was to reassure the Japanese population that have widespread support from other allied nations against China at this time.

The nations participating in the naval event were Japan, the USA, Australia, France, India and South Korea. The presence of at least one French warship was remarkable to me as France is a European NATO nation quite far from the Pacific Theater. Most of the warships were from the Japanese navy, but the US Navy was represented by the massive aircraft carrier, the USS Ronald Reagan and two other surface vessels. Japan’s new carrier was also present. It is smaller than the US carrier, but it is the largest warship built by Japan since World War II. I assume the media counted 36 surface warships in the combined fleet. It is logical that there were also several submarines present but submerged and unseen. For more articles from the world press on this Allied Naval exercise, you can review the articles contained in the second link.

The combined fleet was impressive, but the world is still waiting to see if US and other allied warships will sail by the artificial Chinese island base constructed in the South China Sea to demonstrate that that body of water is still international waters and not under any Chinese sovereignty.

This naval exercise further confirms that modern nations have taken the alliance positions prophesied for them in Ezekiel 38-39’s latter-day prophecy. That prophecy states that the Gog-Magog alliance of Russia, China, Iran and their allies will eventually attack the western world at the very end of our age in a global World War III. They will primarily attack the nations of “Israel,” which in biblical terminology, applies to the modern nations descended from the ten tribes of Israel. The Israelis/Jews are “Judah” in biblical terminology and Judah is not mentioned in Ezekiel 38-39. Three nations of the modern house of Israel participated in the naval exercise in Japanese waters. They were the USA, Australia and France–which are, respectively, Manasseh, one of Ephraim’s nations and Reuben according to the identifications given in my books (and by other authors who also identify the tribes of Israel in modern times). My books have extensive documentation from biblical and secular sources to back up these identifications, and they make sense in the modern world as the Western NATO nations are some of the primary rivals of the Gog-Magog nations in the modern world. The Japanese, Indian and South Korean warships represent the nations mentioned in Ezekiel 38:13 as also not being part of the Gog-Magog alliance–and, therefore, allies of the nations of the ten tribes of Israel. Their identifications are detailed in my articles, What Ezekiel 38-39 Reveal about a Future World War III, and Japan’s Role in Bible Prophecy.

One final point that I think should be made. While Ezekiel 38-39 prophesy that the Gog-Magog alliance will attack the other alliances at the very end of our age, that does not preclude the possibility that smaller, regional wars could occur between these rival alliances in the years leading up to that final global war. There is a simmering war already in the eastern Ukraine that could expand into a larger war, Russia has moved its military forces into the Mideast and is flexing its muscles there even as Iran and China are aiding the Russian presence in Syria and the danger of a confrontation in the South China Sea is very real. If a regional war does break out between these alliances, it does not mean that the fulfillment of Ezekiel 38-39 is necessarily going to happen just yet. There are other major biblical prophecies which have not yet been fulfilled: the fall of the current Babylon the Great monetary/financial system and the arrival of the “beast” global system (Revelation 17-18) and the Two Witnesses (Revelation 11) have not yet begun their power ministry. It is my understanding that these other prophecies need to be fulfilled before Ezekiel 38-39 is fulfilled.