JAPAN TO DOUBLE MILITARY SPENDING; WILL IT “GO NUCLEAR?” 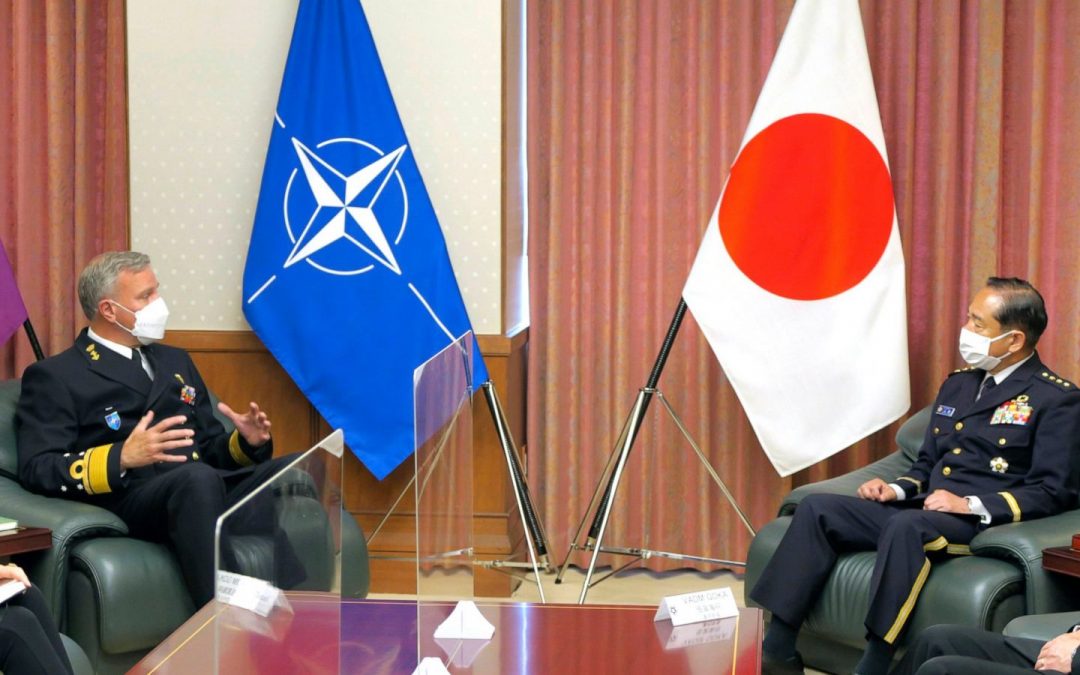 Japan’s new government has embarked on a military spending program that will make Japan one of the premier military powers on the planet. The first link reports that the new Japanese Prime Minister, Fumio Kishida, and his cabinet have approved a doubling of Japan’s defense budget. Indeed, Japan has pledged to spend 2% of its GDP on boosting its military forces; equaling the NATO standard of spending 2% of national GDP on defense. It also adds that Japan is seeking to sign a defense agreement with the United Kingdom along the lines of the defense agreement it has already signed with Australia. Japan is going to align its defense production and strategy increasingly as an ally of NATO nations, and Japan is sending an official to participate in the next meeting of NATO nations. Japan has already modernized much of its military forces, and its navy now openly has light aircraft carriers (as I predicted it would do in a post some time ago).

Faced with the stark realities that now exist in the Indo-Pacific region, Japan has two choices. It can cling to the remnants of its very-outdated post World War II pacifist Constitution, or it can prepare for a future where it is endangered by powerful and predatory neighboring nations (China, North Korea and Russia). Kishida has wisely chosen the latter course to safeguard his nation’s future. The link describes Kishida’s political past when he was more on the pacifist side of the political spectrum. That a politician with his past record is going to militarize Japan so its forces can protect the nation shows that Kishida has seen all the threat analyses and realizes that there is no other realistic choice. Also realizing that he cannot depend only on the USA as an ally, Kishida is reaching out to other nations to forge necessary new alliances.

Kishida also recently gave a major policy speech to an assemblage of East Asian nations, and warned that what is now happening in Ukraine (a hostile invasion) could also happen in East Asia. Clearly, Kishida was mostly warning about what China or North Korean might do. The second link and third link offer more details on Japan’s military spending and security goals. The second link relates that Japan is offering “to assist Southeast nations with maritime security,” and the third link notes Japan’s growing recognition that Taiwan must stay independent in order to secure Japan’s own maritime trading routes. Japan has always needed to trade to survive, and forging security ties with as many Indo-Pacific nations as possible is a wise course for Japan. If China conquered Taiwan, Japan’s economic and security situation would become quite tenuous.

So what will Japan add quickly to its military arsenal? The fourth link reports that Japan has already been engaged for over two years in a domestic program to build hypersonic missiles. The new Japanese hypersonic missiles will be able to strike both targets on land as well as at sea (i.e. aircraft carriers). It also is building its own “6th generation” stealth warplane which can compete with the latest Chinese and Russian warplanes. The link also cites a new defense agreement Japan has signed with Indonesia as an example of Japan forging security ties with other Indo-Pacific nations. As Japan builds up its military forces substantially, it may even become the leader of a new anti-Chinese alliance in the Indo-Pacific region which would be allied with NATO and the Quad nations (US, India, Japan, Australia). The fourth link also comments on the possibility or probability that Japan will become a nuclear power. Personally, I think Japan has no choice but to become a nuclear power. The Russian invasion of Ukraine makes that obvious. If Ukraine had had nuclear weapons, Russia almost surely would not have invaded Ukraine because there would have been a parity of power and risk. No matter how much Japan builds up its conventional forces, it will remain dangerously weaker than China, Russia or North Korea as long as Japan has no nuclear weapons. Japan will also surely have to build hypersonic defensive interceptor missiles to knock down any ballistic or cruise missiles launched at Japan from China or North Korea.

The fifth link reveals how close Japan is to having nuclear weapons. It states: “Today, Japan’s nuclear energy infrastructure makes it capable of constructing nuclear weapons at will.” In other words, Japan can be a nuclear power quite quickly as soon as it decides to be one. That link describes the history of Japan’s nuclear programs, and it mentions a term I’ve cited in previous posts over the years. It comments that Japan may only be “a screwdriver’s turn” from being a nuclear power. Japan faces major threats from China, North Korea and Russia (all nuclear powers), mandating realistically that Japan must have its own nuclear weapons. Given the chaos in recent US presidential politics, Japan cannot rely only on the USA for a “nuclear umbrella.” The link also states that Japan is a “de facto nuclear state” already. Japan may already have built any number of nuclear warheads but has not yet mated those warheads to Japan’s own three-stage ICBMs or its cruise missiles. Since the nuclear warheads may not have not yet been attached to the delivery vehicles, Japan can technically say it does not yet have “nuclear weapons.” However, if it has the warheads, they could be mated to the already-existent missiles within perhaps a matter of minutes. The link also noted that by 2012, Japan had enough plutonium stored to build “1,000 nuclear weapons.”

Due to the above information, I think Japan has made a necessary decision to become a military superpower with its own nuclear arsenal. Given the existential dangers posed to Japan’s survival by China, Russia and North Korea, it is only a matter of time until this occurs.

Biblical prophecy does address the matter of Japan’s role in the world during the latter days. Of course, as is the case with the names of most other modern nations, the word “Japan” is not found in the Bible. The Bible uses ancient names for modern nations in its latter-day prophecies. Tarshish is mentioned in the Bible as an ancient nation involved heavily in maritime trade. Tarshish was originally the name of a son of Javan, who was the son of Japheth, one of the three sons of Noah (Genesis 10:1-4), The nations descended from Japheth are found in the Eastern nations often called Oriental nations. The nations descended from Shem, another of Noah’s sons, are found throughout Europe, the Mideast, North America, Australia and New Zealand, and the nations descended from Ham, Noah’s third son, are located mainly in Africa and in the wider Indian subcontinent region. Many ancient nations have migrated far from where they lived in biblical times, as have the so-called “lost” ten tribes of Israel (a topic examined in detail in my printed books and the E-book available at my website’s homepage). Names of ancient nations are also sometimes preserved in the consonants of modern nations (ancient nations often omitted vowels in written forms). The sixth link discusses “labial consonants,” which are one category of English consonants. It lists the consonants m, p, b, f and v as labial consonants which are often interchanged over time. If we substitute the consonant “p” for the “v” in the ancient name of Javan, we have the modern name: Japan. The name of the ancient ancestor, Javan, is also preserved in the Indonesian Island named Java. We should especially expect the consonants of ancient names to remain fixed over time in Oriental nations like Japan, where ancestor worship or remembrance is a strong tradition.

Ezekiel 38-39 describe the events of an age-ending World War III where the Gog-Magog alliance (Russia, China, Iran, etc.) will attack the modern nations of the ten tribes of “Israel” (now found in Europe, North America, Australia and New Zealand) and their allies. One group of non-Israelite nations not in the Gog-Magog alliance is listed in Ezekiel 38:13, and that group of nations objects to or protests the Gog-Magog nations’ invasion. Note that Tarshish, a son of Javan, is listed as one of the main nations in this clearly-Oriental group. Latter-day Tarshish is referred to as the “merchants of Tarshish,” which means that the nation of Tarshish will be a mercantile, exporting nation whose export-driven model will be copied by a number of smaller nations called “the young lions.” In Asian terms, there is a group of “young tiger” nations that have been known by that name for decades in the financial press. These nations copied Japan’s mercantile model and they include South Korea, Singapore, Taiwan, Malaysia, etc. For a full discussion of these nations’ role in prophecy and for a discussion of how biblical prophecies indicate World War III will unfold and end, please read my articles, Japan’s Role in Biblical Prophecy, and What Ezekiel 38-39 Reveals about a Future World War III. Biblical prophecies have an uncannily accurate description of modern geopolitics, strongly affirming that they had to be written by a Divine Creator God who has the power to intervene in international matters to make sure his prophecies get fulfilled–as he declares he will do in Isaiah 41:22-26, 42:8-9, 46:9-11. Biblical prophecy is so accurate that everyone would benefit from knowing what they foretell will happen in the years ahead of us in what the Bible calls “the latter days.” You can see abundant evidence that we are living in the latter days by reading my article, Are We Living in the Biblical Latter Days?