Japan Readies Its Military to Deploy to Other Nations 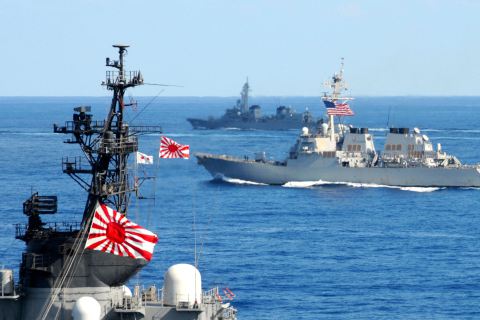 In a very significant development, the Lower House of the Japanese Parliament has voted to allow the Japanese military forces to be deployed to other nations if necessary in order to defend Japanese security. This is unprecedented in the post World War II period as Japan has been constrained by the “pacifist” Constitution imposed upon it by the USA after World War II. The Japanese Upper House must approve it as well, but Prime Minister Shinzo Abe’s Party controls it so its passage is imminent. This bill reinterprets the Japanese Constitution so it allows for Japan to project its military forces to other nations as part of a collective self-defense effort.

It is no secret that Japan has built a robust military force already, but it has heretofore been limited in its deployments due to Constitutional limits. In a historical bit of irony, it was the USA which imposed the pacifist Constitution upon Japan after World War II, but the USA is now one of the biggest supporters of Japan taking a more widespread military posture in Asia. This is quite understandable as Japan is one of many nations threatened by China’s militarism so it may need to deploy its military forces elsewhere in Asia to either help deter Chinese military attacks or to oppose Chinese military actions. The first link and second link give information on the recent Japanese action as well as on the strong opposition to this action on the part of a majority of Japanese voters. Prime Minister Abe is clearly taking this action because he sees the urgent need for it, not because it is backed by popular opinion.

Due to this Japanese Parliamentary vote, we may soon see Japanese warships helping to patrol the South China Sea and other Pacific Rim regions threatened by China. It would also permit Japanese submarines to “shadow” Chinese subs wherever they go. This is an important development. Until now, it has fallen mostly on the American Navy to shadow Chinese submarines throughout the Pacific and Indian Oceans, but now the Japanese Navy can partner with the US Navy in performing this task (I think Australia, India and a few other nations already have a role in this effort as well).

This new policy will also permit Japanese warships to join US warships in naval exercises and in missions far from Japanese home waters. Indeed, this is already about to happen in the immediate future. The last link reports that a Japanese destroyer will soon accompany a US Navy aircraft carrier task force in a mission as the Japanese and American Navies practice and hone their ability to coordinate their warships in wartime actions and to protect and defend each other’s warships. I can’t help but make the following observation. If someone could have, in 1945, entered a time machine and seen that within a single lifetime of  the end of World War II, Japanese warships would be practicing with the US Navy to protect US aircraft carriers from Chinese (or Russian) actions, that person would have questioned the sanity of the time machine. Yet, it has happened.

This is all very consistent with the biblical prophecy in Ezekiel 38-39 which, circa 2500 years ago, predicted the end-time alliances of nations that would be extant in our latter-day period of time. Based on Ezekiel 38, I have written for over two decades that Japan would be a close US ally and that it would not be a part of the latter-day, Gog-Magog alliance. Indeed, I have written that Japan, India, Taiwan, South Korea, Singapore, Australia, the Philippines, Vietnam and other Pacific Rim nations were prophesied to form a regional alliance vs. China (and its ally–Russia), and that they would be aligned with the Western powers of the USA, the European NATO nations, etc. For in-depth information about how Ezekiel 38 foretold the latter-day roles of Japan (and many other nations), I urge you read my free articles, Japan’s Role in Biblical Prophecy and What Ezekiel 38-39 Reveal about a Future World War III. As time progresses deeper into the latter-day period of time for our age, the accuracy of Ezekiel 38’s prophecy about global alliances is becoming ever more accurate and precise. Only a Creator God could guide national destinies to implement prophecies given by him to Ezekiel over 2500 years ago.