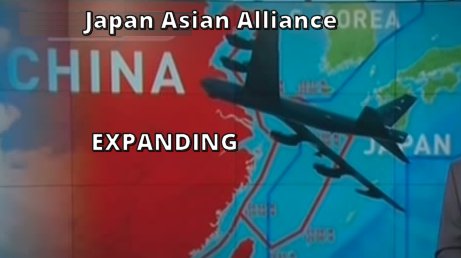 Recently, I posted about the historic vote in Japan’s Parliament to allow Japanese military forces to be deployed to other nations as part of collective defense efforts. It was no secret that the “collective defense” envisioned in this action are military actions vs. China. Almost entirely overlooked by major mainstream media sources are other developments that coincide with and complement this action. Japan is moving swiftly to create military alliances vs. Chinese militarism.

The first link reports that Japan is expanding the number of Asian nations that are joining Japan’s de facto alliance against Chinese military threats. Japan is creating an “economic and strategic cooperation” pact with the Southeast Asian nations of Cambodia, Laos, Vietnam, Myanmar and Thailand. The article makes it clear that the “strategic” part of that pact involves mutual defense planning against the Chinese military threat. While Japan is investing $6.1 billion in aid to these nations, it is not clear what percentage of the aid is for civilian purposes and how much is for military aid purposes. These Southeastern Asian nations, I think, clearly realize that while Japan is no threat to invade or occupy them, China does constitute such a threat. The presence of Myanmar at the event was impressive to me as that nation has previously been rather friendly towards China.

Importantly, another large Asian nation, Indonesia, has moved to join the growing number of Asian nations aligned vs. China (second link). This is a very important development in global geopolitics as Indonesia is a large and strategically located nation which has been largely neutral in Asian power politics in the past. The third link is included as it has a large variety of very interesting links pertaining to geopolitical developments and shifts in Asia that received little or no attention in American or western press.

As further evidence of the growing military cooperation of the USA with the Pacific Rim Asian nations aligning themselves together to mutually defend themselves against a Chinese threat, the last link reports that the USA has been conducting a large military exercise involving 10,000 troops from the Philippine and American military. The Philippines have a right to feel particularly threatened by China, and that nation has been reestablishing its historic defense ties with the USA.

China has only itself to blame for stimulating a broad coalition of Asian nations to oppose Chinese militarism and aggressive actions. China’s building of artificial islands (with military bases on them) in the South China Sea and its claim of sovereignty over this large international body of water are very bellicose actions. China appears to be growing in its confidence that it can wage war against many nations simultaneously. It should not be surprised that the other Asian nations all see China’s growing and blatant military threat and that they are banding together to counter it.

All the above developments are consistent with my longstanding views that modern events are fulfilling the prophecy of Ezekiel 38-39 quite accurately. That this prophecy, written over 2500 years ago, is now being accurately fulfilled in our modern “latter day” period of biblical prophecy, confirms that the Bible has to be the Word of a Creator Being who is eternally alive, sovereign and able to implement his prophecies given millennia ago. God, in Isaiah 41:21-26 points to this specific ability of his to fulfill biblical prophecies as proof of his reality, sovereignty and involvement in mankind’s affairs. My articles, Japan’s Role in Biblical Prophecy and What Ezekiel 38-39 Reveals about a Future World War III, are recommended as further reading on this topic for those readers who have not yet reviewed these articles.