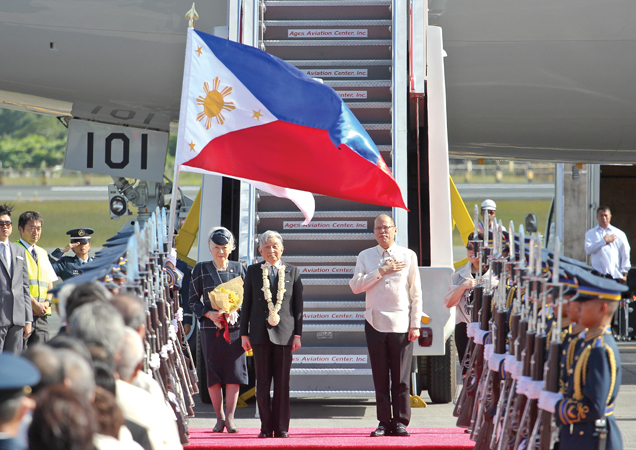 An event just happened which is likely to receive little or no coverage in the American mainstream press even though it is has truly historic significance. I thought I would pass on to readers of this blog some information about this event.

The Emperor and Empress of Japan have paid an official visit to the Philippines and were warmly received by the government of the Filipino nation. This would have been a unheard of impossibility for many decades after World War II, given the cruelty of the Japanese occupying army in the Philippines during World War II. However, it has now become a reality that these two nations are willing to reconcile their differences and work together in a common goal. What is that goal? To coordinate their national efforts to resist Chinese militarism.

The article below does not gloss over the extreme cruelty of the Japanese occupation army in the Philippines during World War II. Given that fact, it is all the more impressive that the Emperor of Japan was so warmly received in the Philippines. As the article notes, the military forces of the Philippines nation are weak, and the Philippines badly need allies against China’s belligerence. The Philippines have little military power to offer to the common effort to oppose China, but they do have something which would be very valuable to Japan in any future war with China. As realtors are wont to say, it is a matter of “location, location, location.” The Philippines have a mass of islands that dominate the eastern side of the South China Sea, where a growing number of Pacific Rim nations are at odds with Chinese expansionism and overt Chinese belligerency in militarizing artificial islands in the South China Sea. If a war does break out, the Philippines can offer harbors, shelter, supplies and friendly airfields to the strong military forces of Japan, the USA and other nations that would be fighting China. I’m sure that Japanese government officials are aware of this fact, and strongly encouraged the visit of the Japanese royal family to the Philippines to enable a rapid warming of Japanese-Filipino relationships in the event they are needed in a common war effort in the future. The article also comments on the South Korean-Japanese relationships and indicates that their common threat from China will also lead to South Korean-Japanese cooperation as well, in spite of South Korea’s misery at the hands of the Japanese in World War II. South Korea has strong military forces, but given China’s growing belligerence and North Korea’s large military forces and its development of nuclear weapons, South Korea badly needs an alliance with regional military powers. Japan obviously is in a position to enhance South Korean security via an alliance.

This may seem like a small event, but the successful, official visit of Japan’s royal family to the Philippines indicates the alliance of Japan and the Philippines is deepening, given that both nations are increasingly threatened by China. This development is entirely consistent with what I have long written and said is prophesied in Ezekiel 38 to occur in the latter days. The Bible prophesies that a future, global, age-ending war is inevitable. China would love to eventually conquer the Pacific Rim nations separately, but China’s growing threat to everyone in the region is pushing former enemy and estranged nations into a common alliance to resist China. As I have noted in previous posts, even Vietnam, which fought a long and costly war with the USA, is gradually partnering with the USA and other Pacific Rim nations for common protection against China.

For a detailed analysis of what Ezekiel 38-39 (and other parallel prophetic scriptures in the Bible) reveal is going to happen in the future in our current “latter day” period of prophetic time, please read my articles, What Ezekiel 38-39 Reveal about a Future World War III, and Japan’s Role in Biblical Prophecy. More information about what Bible prophecy reveals about future events can be gained by listening to my free audio messages about the prophesied role of the modern nations of the ten tribes of Israel (the USA, the UK, many NATO nations, etc.) in the latter days. As you will see (and hear) in the above sources, the convergence of interests of the modern Israelite nations (which includes the USA, the UK, Australia, New Zealand, etc.) with such Pacific Rim nations as Japan, India, Taiwan, Singapore, the Philippines, etc. was prophesied in Ezekiel 38 to occur in our time.

That a prophecy written approximately 2500 years ago is coming to pass with remarkable accuracy in today’s world gives strong proof that the Bible really is the inspired word of a very literal Creator God. Only a Creator God could precisely shape human events to make sure they unfold according to his ancient prophecies. Indeed, our invisible Creator challenges everyone in Isaiah 41:21-26 and 46:9-11 to see that his ability to bring to pass his biblical prophecies exactly as he foretold proves his Divine reality and sovereignty. God’s ability to fulfill his ancient biblical prophesies is abundantly evident in many recent and modern global events, as my article, Are We Living in the Biblical Latter Days?, makes clear.

The world is not yet ready to recognize the Creator’s reality or his sovereignty. The world is absorbed in the minutia of daily life or deceived by the “Big Lie” of evolution. However, before the latter days are over, all the nations and all mankind will tremble at just how real the Creator God really is.