Italy and the Netherlands Give Stinging Rebuke to the EU 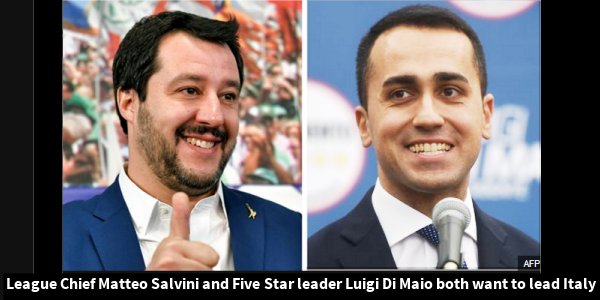 The Italian election is now history and while it is yet unclear who will be the next Italian Prime Minister, it is abundantly clear that Italy’s voters overwhelmingly chose an anti-immigrant, anti-EU path going forward. The first link contains a good analysis of the vote by the BBC, outlining the positions of the major parties and blocs in the multi-party election as well as a map of Italy showing which party or bloc won each of Italy’s electoral regions. All of Italy’s electoral regions chose to support rightist, anti-immigrant, Euro-skeptic parties except for two regions (one was still undecided). The second link‘s analysis reports that the Italian election results were a “complete repudiation of Brussels,” and that a “rebellion [is] underway in Europe” vs. the EU’s dominance. In a development that is especially ominous for the EU and the Eurozone, the leader of one of the winning rightist parties stated that “The Euro is the wrong currency [for Italy]” and that “the common currency is bound to end.” This statement reveals that there is not only a deep resentment of the EU’s lax immigration policies imposed on member nations, but also that there is a seething resentment against the EU’s heavy-handed central financial and economic controls imposed on the EU’s nations.

Italy’s election resulted in a situation where no one party can govern by itself. A negotiating process will now begin to determine who will head a governing alliance of coalition partners. The biggest single winner was the Euro-skeptic Five Star Movement, which won approximately 33% of the vote in an election with many competing parties (third link). However, a coalition of rightist parties willing to work together to govern Italy won 37% of the overall vote. The pro-EU, pro-immigrant governing party was crushed, winning only about 22-23% of the vote. The logical outcome would be a coalition of the Five Star Movement with the rightist coalition–it would have a solid 70% of the electorate backing it. This would make for a very strong governing coalition. During the election it appeared that the Five Star Movement would not be willing to enter a governing coalition with other parties, but a report was released in an Asian media source that it had reconsidered its position and was now willing to enter a governing coalition with the rightist bloc (fourth link). Whoever governs Italy, it will be an outcome that is a huge defeat for the EU’s elites that wanted to create a unified EU bloc governed by an unelected dictatorial government seated in Brussels. The Italian election was a massive victory for the nationalist/populist movement that is asserting itself all over Europe.

In the final link, the Dutch Prime Minister, Mark Rutte, issued an unexpected and surprising rebuke to the EU’s plans to push toward an “ever closer union” of the EU nations. Rutte expressed “loathing” at this goal and called it  a “colossal mistake.” Many have seen the EU as an entity being dominated by Germany and France, however, Rutte added that “nobody would allow that to happen.” This assertive statement by the leader of the Netherlands opposing further efforts to make the EU an “ever closer union” must be a major surprise to the EU’s elites. The Netherlands has hitherto seemed to be a docile follower of whatever actions Germany and France wanted to take. This action by the leader of the Netherlands confirms that even nations thought to be safely in the Franco-German corral are bolting toward an independent course of their own choosing. I doubt many media outlets even mentioned this anti-EU assertion by the Prime Minister of the Netherlands, but it indicates that efforts by those wanting an EU ruled by EU elites and their in-house bureaucrats are backfiring on the EU’s elites.

Combining the overwhelming rejection of the EU by Italian voters with Dutch Prime Minister Rutte’s dissociating himself from further EU integration plans means the EU’s unification dreams are steadily coming apart at the seams. How and when the EU comes apart and what becomes of the Euro currency if the Eurozone also disintegrates could have huge significance in the fulfillment of biblical prophecies. Previous posts have noted that a global currency/financial crisis will occur if the Eurozone comes apart, and that such a crisis could fulfill the biblical prophecy in Revelation 17-18 that a global political/financial system which exists in the latter days will collapse suddenly in some kind of a massive financial crisis. We do not know if a Eurozone disintegration will will be the trigger for the fulfillment of Revelation 17-18, as a variety of other crises could cause the fulfillment of this prophecy. This blog will be watching European developments closely for any such fulfillments as events take place. For an in-depth review of the above-cited biblical prophecy, please read my articles, Is Babylon the Great about to Fall…Ushering in a new Beast System? and The Babylonian Origin of the Modern Banking System.

My thanks to a reader for sending me a link cited in this post.