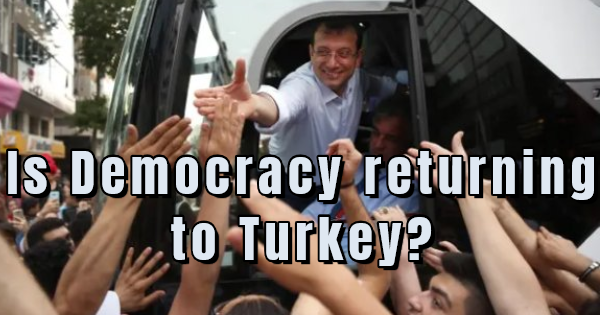 It isn’t often after writing a post that an event occurs which calls for an immediate follow-up. This is one such occasion. My previous post was about Turkey’s tilt toward Russia regarding Turkish President Erdogan decision to buy a Russian air-defense system and Turkey’s expulsion from the F-35 warplane program as a result of that purchase. In my previous post, I noted the biblical ramifications of Erdogan’s policy of having Turkey align itself with Russia instead of with its historic allies–the USA and NATO. That post also detailed my belief that modern Turkey is a nation descended from Abraham’s son, Esau, called “Edom” in biblical narratives and prophecies (Genesis 36:1). I pointed out that no nation descended from Abraham is listed in the Gog-Magog alliance in Genesis 38:2-6, and that this fact did offer hope that Turkey might yet stay allied with NATO. If readers have not read that post, I urge them to do so as this post serves as an addendum to that previous post. Something major has happened within Turkey that increases the hope that Turkey may yet stay in the NATO alliance.

On Sunday, June 23rd, a mayoral election was held in Turkey’s largest city, Istanbul. However, it was not at all a normal mayoral race. It had become a referendum on the presidency of Erdogan, and this came to be as a result of Erdogan’s own actions. Let’s review how this unfolded. In a previous round of Turkish elections, the mayoral candidate of a rival party to Erdogan’s governing AKP party defeated Erdogan’s hand-picked candidate in a very close election. In that first election, an opposition party also defeated the candidate of Erdogan’s party in the Turkish city of Ankara.  Erdogan was greatly angered by his candidate losing the mayoral race in Istanbul, and a Turkish electoral commission was pressured into voiding the first election and decreeing that a second election be held. Undoubtedly, Erdogan was hoping that the second election would result in putting his chosen candidate into Istanbul’s mayor’s seat. The refusal of Turkey’s national government to accept the first election result from Istanbul outraged many Turkish citizens of Istanbul. Many canceled travel plans to make sure that they would be in Istanbul to vote in the mandated second election, which pitted the same two opponents against each other (first link). The result of Sunday’s second election sent shock waves throughout Turkey. President Erdogan’s candidate was crushed in the second election which had been imposed on the voters of Istanbul. In the first election, Erdogan’s candidate lost by a very slim few tenths of a single percentage point. In the second election (apparently) demanded by Erdogan, his candidate lost in a landslide by nine percentage points to the opposition party’s candidate (second link and third link). The margin of victory was so vast even Erdogan cannot force them to vote a third time.

The fourth link relates that the Istanbul mayoral race may be a turning point in restoring democracy to Turkey. President Erdogan has increasingly turned Turkey into an Islamist nation with Erdogan as its dictator. Erdogan has imprisoned many thousands of government employees, teachers, military and police personnel and media personalities who opposed either him or his policies. Free speech and the freedom of the press had almost been eliminated by Erdogan in Turkey when the Istanbul mayoral race took place. Frankly, I’m more than a little bit surprised that it was still possible to hold an honest election in Turkey. In the fourth link and fifth link, there is an analysis of the results that are well worth readers’ attention. They include information that many lawyers were present at voting locations to ensure an honest election and the fact that Erdogan himself has asserted that whoever governs Istanbul governs Turkey. Erdogan was the mayor of Istanbul before he became president of Turkey. This begs the question: might the new popular mayor of Istanbul eventually challenge and defeat Erdogan for the presidency of Turkey? The winning candidate is named Ekrem Imamoglu. Imamoglu’s star is clearly rising in Turkey as he united all factions and parties in Istanbul that opposed Erdogan and who wanted to return to Turkey’s former status as a secular Islamic democracy aligned with the NATO nations. That Erdogan has led Turkey into an economic/monetary crisis worked against him as did his stubborn refusal to reconsider his decision to turn away from NATO and align with Russia in Turkey’s future air defense systems. I think many influential figures in the Turkish business and military community do not want to turn away from NATO and the western world to embrace Russia. I think many Turks fear that Erdogan’s policies will result in Turkey becoming a puppet state under the paw of the Russian bear.

What is certain is that the voters of Istanbul have just issued a powerful rebuke to (and rejection of) Erdogan at the ballot box. You can be sure that all of Turkey (and the world) noticed as well. Erdogan is now greatly weakened on the world stage. Erdogan has greatly overplayed his hand. Turkey’s people are clearly not at all eager to have an Islamic dictatorship ruled by Erdogan. His own future as leader of Turkey may be shortened if a new national election in Turkey occurs soon.  Ekren Imamoglu, the new leader of the anti-Erdogan political forces inside Turkey, has shown he can unite many diverse political factions into a united effort. He comes across as a friendly person who mingles well with the common people. He bears watching as his political career advances.

If my recent post is correct in identifying Turkey as the modern descendants of Esau (Edom), and if the wording of the prophecy in Ezekiel 38:2-6 does indicate that it is not the Creator’s will for any of the modern nations descended from Abraham to be in the age-ending Gog-Magog alliance, then Erdogan’s crushing defeat in the Istanbul vote may mean that God just had a “vote” in the future direction of Turkey. For detailed information about the identification of modern Turkey as a nation of Esau and about this identifications’ connection to the prophecy of Ezekiel 38, please read my first post on this topic, entitled Will Turkey Leave NATO? (sixth link).

Proverbs 21:1 tells us that God can turn the heart of any King in a direction God desires to accomplish his divine will. The ancient world in which the author of Proverbs wrote was ruled by national Kings, not by votes of people in democracies. However, the principle of Proverbs 21:1 is still just as true today. God can easily determine the outcome of elections by moving events to result in electoral victories for candidates who God sees will implement policies in harmony with his revealed prophetic will. It is rare that in a modern nation, a mayor’s race could influence the future course of a nation.  In the Istanbul election, we may have just witnessed such an event.