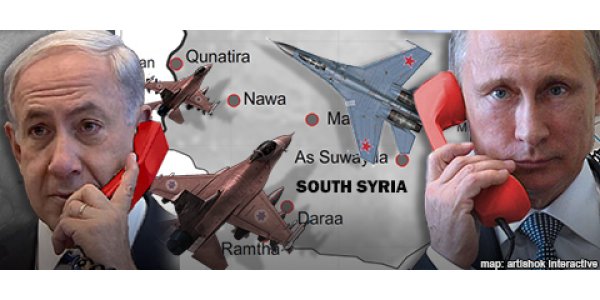 Here in the USA, virtually all media coverage seems to revolve around either the horrific attack in Orlando by a radicalized Islamic terrorist who killed 49 people and injured over 50 more or the US presidential race. However, there are major developments occurring in the world that our American media are all but ignoring. In my posts, I strive to bring some of these largely ignored but important matters to readers’ attention. A major such development has just occurred in the Mideast.

Israeli Prime Minister Netanyahu recently made a two-day trip to Russia for conferences with Russian President Vladimir Putin, and this meeting has changed the dynamics of the entire geopolitical situation in the Mideast. This conference is moving toward a situation where the Israelis will join the attacks against ISIS (first link). In a truly remarkable development, the first link also reports that the Israelis are willing to acknowledge that Russia, not the USA, will be the “senior broker” in talks to produce some kind of Israeli-Palestinian settlement. [I suggest you read that again to let it sink in!] Netanyahu is also reportedly trying to produce an expanded role for Egypt in the effort to finally obtain an Israeli-Palestinian agreement. In another sign that Russia is ascendant in the Israeli-Palestinian talks, the Russians, Germans and British did not bother to participate in recent Mideast talks held in Paris that involved the French and Americans. Clearly, the US government under President Obama is being sidelined as the major player in Israeli-Palestinian talks. The first link also observes that the Russians apparently look with favor on an Israeli-Palestinian settlement that would give Israel sovereignty over its settlements in Samaria and Judea (i.e. the West Bank). Israel’s desire for Egypt to play a major role in these talks is understandable. Both Israel and Egypt are threatened by the terrorist acts that emanate from Hamas in the Gaza Palestinian zone. Egypt is fighting a war against Islamists in the Sinai Peninsula and Israel is constantly threatened by periodic outbreaks of rocket attacks from Hamas-controlled Gaza. Both Egypt and Israel have a strong motivation for getting Hamas under control in Gaza. The first link concludes that while the USA will not be entirely removed from the peace process, a final settlement will be underwritten by Egypt and Saudi Arabia as well as joint Russian-Israeli understandings. The second link and third link add more information on the Putin-Netanyahu talks and the third link describes Russia and Israel as now being “true allies” in the war against terrorism. Does this sound like a remarkable development on the world scene? There are even more remarkable developments described in the fourth link!

The fourth link has information that should have headlined news reports around the world, but I’ve not seen it mentioned in the American media. Also as a result of the Netanyahu-Putin talks, the Israelis and Russians will hold joint war-games between their respective navies and air forces in the Eastern Mediterranean Sea. These war games will begin with Russian warships sailing from Syrian ports held by Syrian President Assad’s forces and Russian warplanes taking off from airbases controlled by Assad’s air force. These Russian military forces will then meet Israeli warships and warplanes departing from IDF ports and air bases. The Russian and Israeli warships and warplanes will then conduct joint, cooperative war games in the region. Once Israeli and Russian warplanes practice working together in a common airspace and coordinating their military maneuvers, expect that the future could witness joint Russian-Israeli air strikes to crush ISIS forces in the Mideast. Very significantly, the fourth link includes the statement that this Israeli-Russian cooperation is a “historic decision that spells the end of the IDF’s unique relationship with the US military (emphasis added).” That is an historic development!

What would lead the Israelis and Russians to draw closer together militarily at this time? The answer is “money.” The fourth link also explains that Israel will allow Russian companies to participate in the development of a massive energy field that the Israelis will be bringing on line in the near future. Russia is an energy-exporter and soon Israel will be one as well. Saudi Arabia, Kuwait and other Mideastern nations are also energy-exporters. As an energy exporter, Israel will now have an expanded community of interest with the other energy-exporting nations. Importantly, if Russian energy companies are involved with the development and operation of the Israeli energy field, the Russians will have a vested interest in helping to militarily protect the Israeli energy field’s offshore infrastructures. Russia and Israel can cooperate in helping to move energy prices higher as that would help both nations, as well as help the Saudis, Kuwaitis, Iranians, etc. With Russia becoming a partner with the Israelis in developing this energy field and in attacking ISIS, Israel knows that Russia will have a strong motivation to keep a tight leash on the Syrians, Iranians and Hezbollah to discourage them from attacking the Israelis in any way. I suspect that if the Mossad and FSB start sharing intelligence to fight terrorism, the terrorists will have a much harder time surviving–which will help all nations. It also seems implicit in this Russian-Israeli cooperation that the Israelis have accepted that Assad will remain as the leader of at least that portion of Western Syria which hosts the Russian naval bases and air fields inside Syria.

The above actions speak volumes. It has long been known that President Obama has a strong hostility toward the Israelis in general and toward Israeli Prime Minister Netanyahu in particular. Obama was caught slamming Netanyahu in a conversation with a former leader of France when he did not know he was near an open microphone. The Israeli Defense Minister was snubbed by Obama officials when he traveled to the USA, and when Netanyahu traveled to the US to give an honored presentation to a joint session of the US Congress, Obama snubbed Netanyahu. Obama has essentially wrecked the Mideast. Obama’s premature withdrawal from Iraq created a void in which ISIS rose and which permitted Iran to move into a position of dominance over the Iraqi central government. Obama pulled US forces out of Yemen and turned that nation into a chaotic war zone. Obama (and Secretary of State Hillary Clinton) turned Libya into a warlord and terrorist haven when the US and NATO bombed Gaddafi out of power in Libya, even though Gaddafi posed no threat to the West and was cooperating in the fight against Al Qaeda. Was it Obama or Clinton or both who gave the “stand down” order so US military forces were not allowed to rescue a US Ambassador and three other Americans from death in Benghazi, Libya? Obama and his wrecking crew also surrendered to Iran in a major nuclear agreement, greatly endangering Israel and Sunni nations in the Mideast. Obama has been a destroyer of stability all over the Mideast. I think the rapid pivot of the Israeli government toward Russia is tacit acknowledgment of two things. The first is that it recognizes that the Russians are becoming the dominant player in the Mideast and the American role is rapidly diminishing; therefore, the Israelis must adapt and come to an entente with Russia. The second is that I think Obama has so alienated the Israelis (and many other nations the Mideast) that Netanyahu’s actions just told Obama to “go to hell” in an unspoken way. Obama has wrecked American relations with the Israelis, historically one of America’s closest and most valuable allies. The next American president will have a major task ahead in trying to undo Obama’s damage throughout the Mideast and restoring US-Israeli relations.

Biblically, I don’t think the Russian-Israeli cooperation will last. Revelation 16:12-18 and Zechariah 14 prophesy that the territory of the Israeli nation will come under an immense attack from the east in a great war at the very end of the latter days. That attack from the east will have to include Iran and Iranian proxies, who are Russia’s allies. God has also guaranteed Israel’s security in the latter days in Zechariah 12. However, those events are years ahead of us, in all likelihood. For now, Israel and Russia have an understanding. Both Putin and Netanyahu have “stuck it” to Obama.

Bet you haven’t heard about this from the major American media.