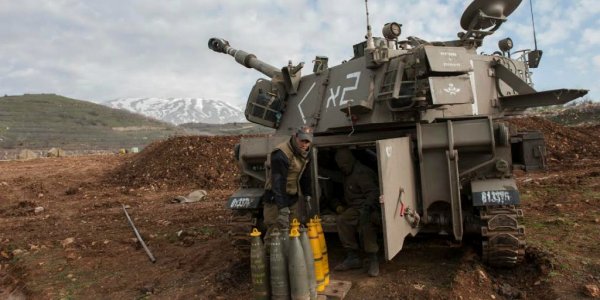 The first link reports that after Israel shot down an Iranian drone over Israel and an Israeli F-16 was shot down by Syrian-allied forces, the Israeli air force launched a major strike vs. Syrian air defenses. The link reports that this air strike was successful in “taking out between a third and a half of Syrian air defenses.” Let that sink in for a moment. If this is a true report, this strike was far greater in scope than a mere retaliatory raid for losing one Israeli warplane. If Israel has wiped out one-third to one-half of all Syrian air defenses, this appears to me to be a pre-emptive strike on Syrian and Syrian-allied air defenses to make way for a very widespread attack on Israel’s enemies inside Syria. The first link also states that Hezbollah has “150,000 missiles” inside Lebanon, and obviously they are all pointed at Israeli targets. Israel has a very effective, layered air defense shield with its Iron Dome, David’s Sling and Arrow air-defense systems. However, if Hezbollah really has that many rockets and missiles of various types and ranges, a war between Israel and Hezbollah will cause major damage inside Israel. Israel’s response may also all but eliminate Hezbollah as a fighting force. Other enemies of Israel may effectively cease to exist as future threats.

Iran has furnished Hezbollah with much of its missile inventory, so Iran would surely be hit hard in any war between Hezbollah and Israel. Israel has already stated that any major war breaking out would result in Israel striking directly at Iran (second link). Israel has the ability to make a very punishing strike at targets inside Iran via Jericho missiles, fighter-bombers and cruise missiles from its Dolphin submarine fleet. If Israel has to go to war to save itself from an existential threat from Iran and its proxies, it likely will not be going to war without allies. Iran poses an existential threat to the Sunni Arab governments in the Mideast as well as to Israel. The Sunni nations may cooperate in such a strike upon Iran before Iran becomes even more powerful in the future. The USA may also contribute to this action. The third link cites the US National Security Advisor, H.R. McMaster, as warning that “Iran must be confronted” and “…”the time is now, we think, to act against Iran” (emphasis added). That sounds to me like a very blunt warning to Iran.

The fourth link makes it clear just how advanced Israel’s war preparations have progressed. The IDF is now ready to go to war on multiple fronts, and the state of readiness is impressive. That link reports of the Israeli air force that: “several thousand targets can be hit within 24 hours, every 24 hours (emphasis added).” The link adds that the Israeli military would pull its front-line units off the Egyptian and Jordanian borders in any major war, and this attests to a state of de facto alliance with these Sunni governments in any war Israel fights with their mutual Iranian-Shiite enemies. Israel is mass producing tanks and now has armored vehicles that reach speeds of 90 kph to maneuver them to where they are needed most in any conflict. The Israeli navy would also be firing numerous salvos of surface-to-surface missiles at Hezbollah and Hamas targets in any war. The Israeli paratrooper force just completed a massive drill with extensive live fire exercises (fifth link). These are war preparations that Israeli media are allowed to report. Surely, Israel has electronic and other war systems ready that they do not wish to reveal until they are used in combat. Ominously, Israel has also held large-scale civilian preparation exercises in Israeli schools to ready students for defensive measures in the event of attacks (sixth link).

Clearly, Israel is now on a war footing. The threat of war is very imminent. Israel’s military and civilian populations are as ready as they can be. Do not be surprised if you wake up to the news some morning that a major war has broken out between Israel and Iran and its proxies. Both Israeli Prime Minister Netanyahu and US President Donald Trump have chafed under the foolish “agreement” Obama and his minions negotiated with Iran. If Iran is foolish enough to be involved in a war with Israel, I think it can be predicted with certainty that all known nuclear and missile facilities inside Iran will be hit hard and many will be annihilated.

Who will win such a war if it erupts in the Mideast? My bets are on Israel, and I base that expectation on a prophecy in Genesis 49:8-9. Genesis 49 is a prophecy about all the tribes of Israel in the latter days–our modern time (Genesis 49:1). Verses 8-9 are a prophecy about “Judah” which refers to modern Jews/Israelis. It foretells that in the latter days, the Jews/Israelis will be “a lion’s whelp” whose “hand shall be in the neck of thine enemies” and that their enemies will be “prey.” This prophecy fits perfectly with the prophecy of Zephaniah 2 that predicted the Jews would again have a nation in the former Promised Land in the latter days of our age. Genesis 49:8-9 accurately describes Judah as a “lion’s whelp” as it is a young and small nation; however it will have the ferocity of a lion. Zephaniah 2 and Zechariah 12 and 14 also prophesy God will not allow the Jewish nation in the Mideast to be conquered in the latter days. This means Iran will not be successful in “wiping Israel off the map.”

When/if Israel has to go to war against its enemies to preserve itself and its people from a growing existential threat, my prayers will fervently be appealing to the King of the Universe to remember his above prophecies and give the Israelis a victory so impressive it will astound the world. I urge all readers to do so as well.

For more in-depth information about topics addressed above, I urge you to read my articles, Four Reasons the Jews are Judah, and Are We Living in the Latter Days? I also urge you to obtain either copies of my four-book set on the history and modern whereabouts of the ten tribes of Israel or my downloadable E-book on the same topics, The “Lost” Ten Tribes of Israel…Found!  Both are available at my homepage. If you do not realize the modern locations of the ten tribes of Israel among the nations of the world, you cannot possibly understand biblical prophecy with any high degree of accuracy.

Iran and its proxies have “sowed the wind” with war preparations and threats vs. Israel. They may be about to “reap the whirlwind” of their actions.