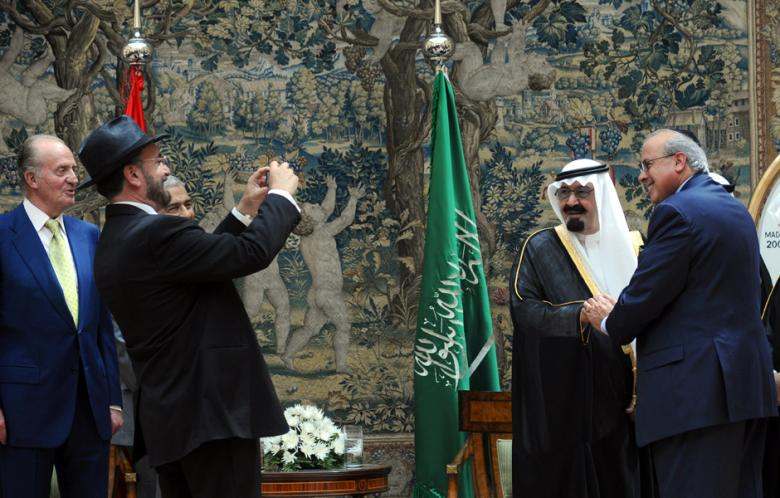 Long-time readers of my blog know that, for years, I have been following the developing alliance between Israel, Saudi Arabia, Egypt, Jordan and other moderate Sunni nations. The aforementioned moderate Sunni nations have been the most prominent in this developing alliance as they are among the nations most threatened by Iran’s nuclear program and growing military expansionism. Recent events indicate that this alliance is developing at an increasing rate.

The first link reports that Israeli Foreign Minister, Dore Gold, gave the first ever personal interview by a high Israeli official with a Saudi newspaper. This is a remarkable event worth noting as it signals that the Saudis are preparing their people for closer ties to Israel. This interview would surely not have happened unless it was approved by the Saudi government at the highest levels. The interview focuses on the joint threat to Israel and Saudi Arabia by Shiite Iran and ISIL. The headline of the link also notes that this new Mideast alliance is being driven by the “cooling” relationship between Israel and the USA during the administration of President Obama.

This initial Israeli interview in the Saudi media was followed quickly by a second interview (second link). The second interview involved the Saudi media interviewing a top Israeli IDF general about the threat to Israel from Hezbollah (an ally of Iran). The interview discussed the various alliances in the Mideast, and the IDF general acknowledged that “Israel had secret relations and common interests with a number of Arab states besides Egypt and Jordan. Obviously, the very fact that top Israeli leaders are now being interviewed by the Saudi media makes it clear that closer relations are being developed between Israel and Saudi Arabia, and almost surely, Saudi Arabia’s allies in the Gulf Cooperation Council. In the recent Egyptian-Saudi-UAE seaborne invasion of a Houthi/Shiite-held island in the southern approaches to the Red Sea (examined in a recent post), I would not be surprised at all if that military operation was helped by sub rosa Israeli assistance such as satellite reconnaissance of the island prior to the invasion. The interview in the second link even raises the subject of military cooperation between Israel and Saudi Arabia and other Sunni nations.

Reported in the third link is a truly remarkable event. It relates that Egypt’s President al-Sisi joined the Coptic Christian leader at a Christmas service at an Egyptian church, and pledged that Coptic Christian churches which were damaged in previous years will be restored under al-Sisi’s government. This is a watershed event, and it reveals that al-Sisi is making every effort to unite Egypt’s Sunni Muslims with Egypt’s Coptic Christians into a unified alliance within Egypt. Egypt’s al-Sisi is proving to be an enlightened moderate Sunni head-of-State, and his policy of Sunni-Coptic Christian good will should be seen as being coordinated with the steady warming of Saudi-Israeli relations. Egypt’s al-Sisi is precisely the kind of Sunni leader the USA should welcome and applaud, but Obama has been chilly to him since al-Sisi saved Egypt from a tyrannical Muslim brotherhood leader. That Obama is chilly toward such a good Sunni leader speaks volumes about the Obama administration’s goals and objectives.

The fourth link offers graphic evidence of Iran’s duplicity and just how real is its threat to the Sunni nations and to Israel. It reports that Iran has unveiled a new missile which is capable of delivering a nuclear warhead to targets within its range. As the link observes, this action “is a defiant slap at the administration of President Obama.” Indeed! It makes complete fools out of Obama and those in his administration who negotiated this so-called nuclear deal with Iran. Iran is making it very obvious that they never had any intention of abiding by the deal and their stated intention to increase funding for Iran’s [nuclear-capable] missile program confirms Iran intends to continue its nuclear program regardless of what that ridiculous deal says. If Obama and his aides had an ounce of common sense or any realistic ability to evaluate world geopolitics, they would immediately repudiate the nuclear deal. However, I think by now the entire world knows that it is too much to expect “an ounce of common sense” to be found inside the Obama administration. Iran’s advancing of its nuclear-capable missile program also accelerates the motivations for a Saudi-Egyptian-Israeli-Jordanian alliance to come into being. Indeed, it may already exist behind the scenes, but may be openly announced at some point in the future. Given the advances in Iran’s nuclear program, the Sunni nations badly need an alliance with a nuclear power who will be a firm ally with them against Shiite Iran and its allies. Unfortunately, the USA cannot be trusted as long as Obama is president. The obvious anti-Iranian ally they can trust is…Israel.

The final link is included as it offers a wild-card addition to the growing Israeli-Sunni alliance. The Kurds in northern Iraq are Sunni Muslims and they are moderates, have been egalitarian about sheltering anyone fleeing from the madmen of ISIL and they have proven to be effective fighters against ISIL. The Kurds have been getting a raw deal from the Iraqi central government which is Shiite and aligned with Iran. The USA and western powers have also been giving the Kurds a raw deal by either reneging on their pledges of heavy weapons to the Kurds to fight ISIL or by shipping weapons intended for the Kurds via the Iranian Shiite central government at Baghdad. That assures that any heavy weaponry so shipped goes not to the Kurds fighting ISIL but to the Shiite, Iranian-backed central government of Iran. Surely, the Obama administration knows the heavy weaponry for the Kurds never reaches them because the Shiite Iraqi government confiscates them at Baghdad. Since the Kurds are Sunnis, they are also threatened by Iran and have little reason to trust the USA very much. Perhaps the Saudis, Egyptians, Jordanians and Israelis could invite the Kurds to join their alliance and announce at a press conference that they are all recognizing Kurdistan as an independent nation, exchanging ambassadors with it and forming a military alliance with the Kurds. Can you imagine how that would shake-up the Mideast? The final link reports on the growing disaffection between the Sunni Kurds and the Shiite Iraqi central government over oil revenue sharing. An independent Kurdistan would be a great ally for Saudi Arabia, Egypt, Jordan and Israel.

The above developments are entirely consistent with the prophecy in Ezekiel 38-39, as I have noted in numerous posts over the years. The Creator God is in overall control of global geopolitics and he will shape world events and alliances according to his expressed will.