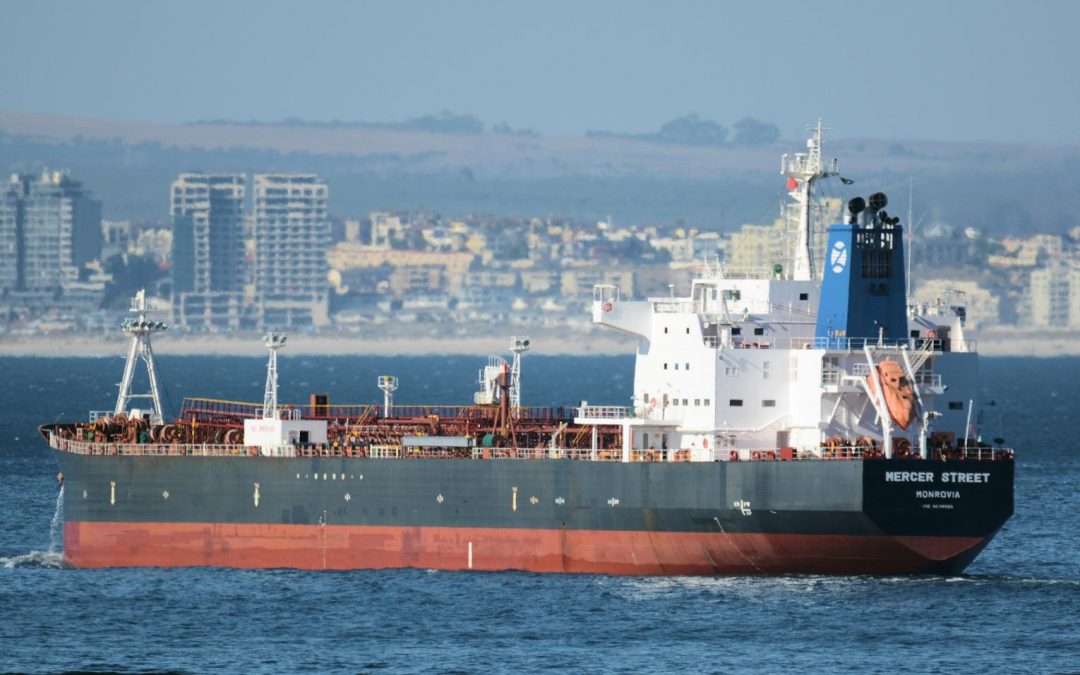 The Mideast is again drawing closer to open warfare between Iran and Israel. The latest escalation occurred when an Israeli-managed tanker ship was attacked off the coast of Oman with the loss of two crew members’ lives. The first link offers a report about the incident when it was first being reported. Israel made it clear it regarded Iran as being responsible for the attack, and that the US Navy was protectively escorting the damaged ship to a safe port. The Israeli government called for a “tough response.”

The second link offered more details about the attack as the situation developed. It relates that there may have been two attacks on the vessels and that the main attack was carried out by a drone. The attacked ship was heading for a port in the UAE when it was hit. The link indicates that Iran tacitly admitted responsibility for the attack by saying it was a “response” to an Israeli attack against a target at a Syrian airport. Of course Iran does not mention that Israel has launched such attacks vs. targets at Syrian airports because Iran is shipping weaponry to Hezbollah and Syria via Syrian airports to use in a war of extermination against Israel. Israel has every right to defend itself against Iran’s stated policy of “wiping Israel off the map.” The link also notes a British maritime body confirmed the attack was not an act of terrorism, which means it was a deliberate military attack. The third link adds that the crew of the attacked ship did report a drone attack, and that this indicates a government or a government’s proxy force launched it. A common thread through these links is that Israel will not stand by idly without this attack being punished.

The fourth link from Al Jazeera, an Arab news network, adds that the drone attack was done by “one-way drones,” in other words by drones on a suicide mission. The link states that the use of such one-way drones is consistent with past tactical actions by Iran and its proxies. It also added that other Israeli ships have also been attacked recently in that same general area. I urge readers to watch the video link at the end of the story as it almost certainly offers a first-hand report of the tough Israeli action taken against Iran to repay it for the attack on the Israeli-linked ship.  It offers what was then a live news report of several Iranian ships being set afire that were being built in a shipyard in the Iranian seaport of Bushehr. That this attack came very soon after Israel threatened retaliation and that it was directed against Iranian ships makes it very likely that Israel just sent Iran another warning that it will suffer greatly if it continues to seek Israel’s destruction. The selection of the target site is almost certainly significant as well. Bushehr, Iran is where an Iranian nuclear reactor is located. This makes it a further warning to Iran that its nuclear facilities are at increasing risk of being attacked by the Israelis unless Iran backs off. However, I doubt Iran will back off in its campaign vs. Israel’s right to exist. If anything, Iran’s policies toward Israel are likely to harden even more, as this link notes that the new Iranian government is going to be more hard-line than the last one.

The fifth link has the most recent date, and it reports that “at least seven” Iranian ships had been set ablaze in this mysterious fire. It describes the “massive blaze” which destroyed Iranian ships which were being built with “fiberglass” hulls. These were likely the small types of Iranian warships which attack in swarms to launch torpedoes and cruise missiles. I think it is obvious that these small attack craft could also be used to launch one-way military drone attacks. It is entirely possible that small warships such as these were used as platforms to launch the drones which attacked and damaged the Israeli-managed ship off the coast of Oman. That they were being built with fiberglass hulls indicates their intended use was military as a non-metallic hull would be much harder to detect by some defensive systems and they would also not likely set off any magnetic mines. I’m sure satellite and other intelligence sources are being rigorously reviewed to see what ships were used in that attack as well as to determine where they were based. This link has a very good map of the Iranian sites where explosions and fires  have “mysteriously” occurred at facilities within Iran that are linked to Iran’s nuclear or military programs. Previous posts have discussed some of these attacks, but the map at this link gives a good perspective at how widespread they are. There are also embedded links showing live scenes from these sites showing the fires and blast damage.

This latest exchange of blows reveals that the Mideast could erupt in an Israeli-Iranian war at almost any time. Indeed, the war has already started in a low-level but persistent manner. Keep in mind there is no moral equivalence between the positions of Israel and Iran. Iran has threatened to “wipe Israel off the map,” but Israel has no national goal of wiping out Iran. Israel has the right to defend itself and to preserve its nation. It is possible that the even-harder-line government taking power in Tehran may simply tell Hezbollah to start a war by launching tens of thousands of rockets and missiles at Israel. Many will be aimed at Israel’s cities, electrical and water infrastructures, military bases, etc. Israel’s air defense systems are likely the best in the world, but they cannot knock down all of the incoming projectiles. Israel would have to identify and destroy all the launching sites for Hezbollah missiles to stop the barrage coming into Israel. I have no doubt that Israel will attempt to defend itself with non-nuclear means, but if it becomes necessary to use nuclear weapons to save the nation, I expect that Israel will not hesitate to use them. Israel’s only realistic way to quickly knock out all Hezbollah launching sites in Southern Lebanon may be to detonate a series of low-yield tactical nuclear weapons all across Southern Lebanon where Hezbollah holds sway. Think how world geopolitics will change if Israel demonstrates that nuclear weapons can and will be used by nation-states to protect themselves from attack. Hopefully, Iran has some cooler heads which will not provoke Israel into such a response, but that cannot be assumed.  When you threaten to wipe out a nation with nuclear warheads off the map, any sane group of leaders must realize that any such threatened nation will certainly use nukes to defend itself. Since World War II, no nation has been crazy enough to provoke another nation into using its nukes. Iran may be just crazy enough to make such a colossal error in judgment.

If an Israeli-Iranian war erupts, Israel will win it. As I have mentioned in previous posts on this topic, Zephaniah 2:1-11, Zechariah 12:1-9 and Zechariah 14:1-14 all prophesy that God will protect the Israeli/Jewish nation from destruction. These prophecies are also noteworthy because they consistently use the term “Judah” to describe the Israeli/Jews in the latter days. This contrasts with Ezekiel 38-39 which uses the term “Israel,” not “Judah” in describing the target of that prophesied latter-day attack against the modern nations descended from the ancient ten tribes of “Israel.” These tribes can be identified in my books about the history and modern locations of the ten tribes of Israel; all these books can be obtained at my website’s homepage.  Readers interested in how the USA fits into latter-day prophecies can see that examined in my article, The United States of America in Biblical Prophecy.