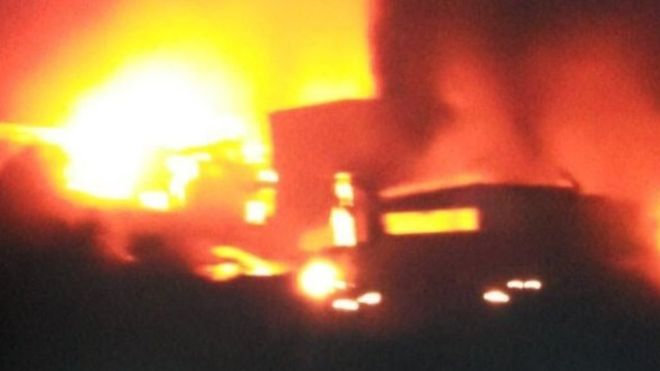 While the world’s attention has been focused on the North Korean military provocations against the USA, Japan and South Korea and the titanic Hurricane Irma, the Israelis have struck deep into Syria to eliminate a key facility which apparently either produced or stored advanced missiles of an Iranian origin. These two links report that the strike came from Lebanese airspace so Israeli warplanes must have fired the missiles after entering Lebanese airspace from the Mediterranean Sea.

In addressing this raid, Israel’s Defense Minister, Avigdor Lieberman, is quoted in the first link as saying that “We will do everything to prevent the existence of a Shiite corridor from Iran to Damascus (emphasis added).” Note the word “everything:” in his statement. Because Iran has threatened to “wipe Israel off the map,” Israel cannot allow Iran to have a continuous land corridor from Iran to Syria as that would allow Iran to move its military forces right up to the Israeli border. That Israeli interest coincides with US and Saudi interests as well. The second link asserts that Israel has conducted about 100 airstrikes inside Syria in the last five years. That is a number of strikes higher than I would have suspected, and it confirms that Israel is monitoring all activities inside Syria very closely.

The first link also reports Israel is conducting an extensive air defense drill along its northern region. This has personal significance for me. When I was in Israel in August of 2000, I stood with an Israeli friend at the very northernmost part of Israel where it borders Lebanon. It was at night in a town named Yuval if my memory serves me correctly. The military border was marked by two high metal fences with light towers illuminating the zone between the two fences. I assume the portion between the fences was a “kill zone” that was mined for security reasons. It was sobering to look through the fenced area and realize that the land a short distance away from me was governed by Hezbollah. Many Israeli citizens live in cities, towns and farms within easy range of Hezbollah’s missiles and rockets so Israel’s development of its Iron Dome air defense shield was critically important.

It is noteworthy that the Israeli warplanes were able to deliver their ordnance to Syrian targets that are surely well within the defense radius of the sophisticated Russian air defense systems placed in Syria. This mean one of two things. Either the Israeli warplanes have very sophisticated technologies on them to confuse the Russian sensors or the raid was done with Russia’s tacit permission. It is worth remembering that Israeli Prime Minister Netanyahu recently flew to Russia to visit with Russia’s leader, Vladimir Putin. It is possible that a topic at that meeting were the threats to Israel posed by an Iranian-Syrian land corridor which could lead to a large regional war involving many nations in the Mideast. Russia may not want such an all-out war at this time. However, Russia does not fully control the Shiites in Syria, Hezbollah territory and Iran. Iran, in its Shiite zeal, could push too many missiles, troops and weapons into Syria and southern Lebanon for Israel to tolerate. If this happens, war would become almost certain.

As our eyes are focused on the Korean Peninsula, let us remember that a large war in the Mideast is also only a spark away from being ignited. These developments are consistent with biblical prophecies about the latter days. Zephaniah 2:1-9 prophesied that the modern Jews (“Judah” in biblical terminology) would have a nation of their own in the old Promised Land during the latter days of this age, and Zechariah 14:1-7 prophesies that God will defend Judah and Jerusalem (the Israeli capital) in the latter days. Zechariah 14 is a prophecy about divine intervention which occurs at the very climax of this age when a major war is raging. God intervenes to annihilate an attacking army that is threatening to conquer all of Jerusalem. That attacking army is identified in Revelation 16:12 as coming from the “kings of the east.” They are attacking westward (toward Jerusalem) by coming in hordes across the Euphrates River (which is now controlled by an Iranian proxy-government in Iraq). We do not know when that event will transpire, but we are seeing the preparatory steps to making that attack possible. Iran wants a land corridor from Iran to Syria to send its forces westward. Israel says they will do “everything” to stop that from happening. We could easily see a regional Mideast war prior to the fulfillment of the final Mideast war prophesied in Zechariah 14.