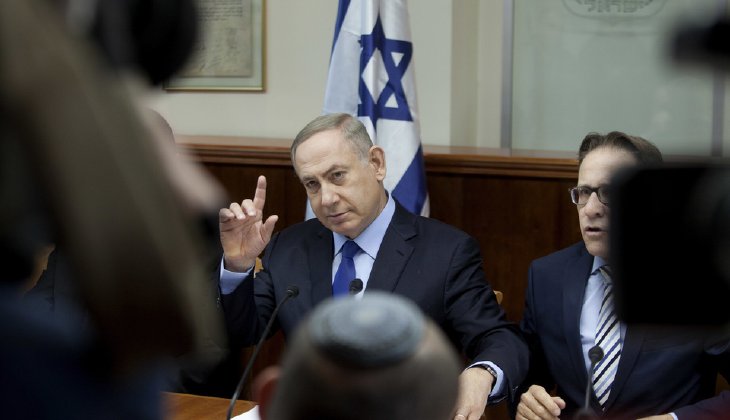 The Israeli government has cut off “working ties” with the twelve nations who voted for the UN resolution which condemned Israel regarding its settlements policy. The first link and second link report that the twelve nations with whom Israel is suspending many aspects of diplomatic relations are the United Kingdom, France, Russia, China, Japan, the Ukraine, Angola, Egypt, Uruguay, Spain, Senegal and New Zealand. It must be noted that while this does not constitute a formal break in diplomatic relations with these nations, it is an extraordinary expression of Israel’s anger at the UN vote by these nations. The second and third link report the Israeli government has evidence that the Obama administration actually orchestrated the UN resolution from behind the scenes and that this evidence is “ironclad,” according to the third link. What is especially noteworthy is that it is evident in the third link’s language that Israel now has friends in both the Arab world and other international sources which informed the Israelis about what the Obama administration was doing to harm Israel’s interests. It does seem that President Obama and his administration wanted to take a very anti-Israeli, anti-Jewish action against Israel at the UN before leaving office, but that they wanted to do it without their fingerprints on the action. The third link indicates they have been caught red-handed, so to speak, by highly-placed persons in the world of international diplomacy who identified the duplicitous role the Obama administration really played in the UN resolution.

The blow-back from the Obama action is likely to be far more than the Obama administration ever expected, and the UN vote may be very counterproductive for the Palestinians. Not only have the Israelis suspended many diplomatic contacts with twelve nations over the vote, but they may now assert controls over the Palestinian region that they have hitherto withheld themselves from doing. The fourth link cites Israel’s Deputy Foreign Minister, Tzipi Hotovely, as saying that perhaps now is the time to begin applying Israeli laws to Judea and Samaria (Israeli terms for what the media call the West Bank or Palestinian Zone). If this happens, the Palestinian Authority would essentially be all but meaningless and, presumably, Israeli police will take over law enforcement controls in that Palestinian region. That would effectively impose de facto Israeli sovereignty over that Palestinian region and possibly lead the way for its eventual annexation to the nation of Israel [After all, if Russia can annex the Crimea by force, why can’t Israel emulate Russia and annex the Palestinian region?]. I’m sure that is not what the UN had in mind when it voted for this anti-Israeli resolution. They thought they were imposing a two-state solution on Israel, but what they may have done is kill or greatly delay any possibility for a two-state solution in the region.

I think Israel’s reactions would have been even stronger if it were not for the fact that Donald Trump will be the US president in less than a month. The UN vote will likely induce Trump to be an even more pro-Israeli president than he would have been. The fifth link reports his scathing criticism of the UN and the sixth link indicates the UN vote may well cause Trump to move the US embassy from Tel Aviv to Jerusalem very quickly in his administration.

That Democratic President Obama’s behind-the-scenes actions vs. Israel are being exposed openly in the global media will surely intensify the changes I opined would happen in my previous post. This action will almost surely move considerable support from the traditionally-Democratic American Jewish community to the Republican Party of Donald Trump. If Trump becomes a strong ally of Israel, as seems a certainty, it will surely prove the GOP is the only reliably pro-Israeli party in the USA and that the Democratic Party, although giving lip service to Israel in public pronouncements, is actually stabbing the Israelis/Jews in the back behind the scenes. If Trump moves the US Embassy to Jerusalem in a high-profile action, it will cement Trump’s positive relations not only with the Jewish voters in America but with Israelis across the political spectrum in Israel. Obama likely desired to hurt Israel just before he left office, but the unintended consequences of his action may be that he will greatly increase the alliance between a Trump-led America and the Israeli government.

Another thing is significant. Egypt, the Arab/Islamic representative on the UN Security Council, was originally the sponsor of this anti-Israeli UN resolution, but it changed its mind and tabled it after Donald Trump had a phone conversation with Egyptian President al-Sisi. This signals that Egypt wants a good relationship with a Trump-led USA, but it also begs the question of what nation then convinced other nations to push the resolution forward anyway. The second and third links indicate it may have been the Obama administration that took that action. Obama may have been personally jealous that a call from President-elect Trump to Egypt initially had more effect that the foreign policy team of the US government under Obama. It is my opinion that while Egypt is on the list of twelve nations with whom the Israelis downgraded diplomatic relations, that is only because Egypt “had to” vote for the UN resolution. Egypt is closely coordinating anti-terrorist actions with Israel, as I have documented in previous posts, and I suspect that Egypt’s inclusion on that list of twelve nations is more in the “wink-wink, nudge-nudge” category of action.

I think that the other nations of the world are coming to see that Donald Trump is a decisive leader who is a man of action. He is not a man that you want as an enemy, but he will be a truly loyal friend to those who are loyal to him. Based on what I wrote and cited in my recent post about the close cooperation between the Trump transition team and the heads of the Israeli intelligence agencies, I’d bet Donald Trump has already seen the information that Israeli Prime Minister Netanyahu referred to when he said there was “ironclad” proof that Obama orchestrated the anti-Israeli UN action. If so, Donald Trump has the names of all the US career diplomats who helped orchestrate this US stab-in-the-back against Israel. I suspect they will all be asked to resign or take early retirements in a Trump administration. They were likely all allies of Hillary Clinton…and their diplomatic careers have just ended.

Once Trump gets his trusted appointees in charge of the US intelligence agencies and the State and Defense Departments so he can trust them, I expect there will be extremely close cooperation between the USA and Israel on all defense, diplomatic and intelligence matters. Obama was surely the most anti-Israeli president the USA ever has had. Ironically, he will be followed by what will likely be the most pro-Israeli president the USA has ever had. The contrast will make Trump look all the better to the Israelis (and to all other traditional US allies who Obama has offended and/or ignored for eight years).

The Trump presidency will represent a sea-change in global geopolitics that would have been wholly unexpected just two months ago. It will be most interesting to watch what is about to happen.