Israel Beefs up Its Missile-Defense Systems 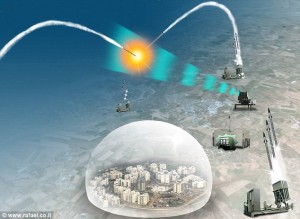 The Israeli military has taken several steps to significantly enhance its already substantial missile-defense capabilities. I think many readers already know that Israel’s Iron Dome defense shield can down a high percentage of incoming missiles and projectiles fired at medium altitudes toward targets within Israeli territories. The Iron Dome air defense system has now been modified and tested so it can be successfully deployed aboard naval warships (first link). This makes it possible for Israel to deploy its Iron Dome air defense system to other locations via warships or other mobile vehicles.

This is a very important development and makes the Israelis an even more important ally for Egypt, Saudi Arabia and Jordan. If these nations continue to cement a developing alliance with the Israelis against the mutual Iranian threat, the Iron Dome defense system mounted on Israeli warships could be very valuable in aiding the Sunni nations in such an alliance. For example, an Israeli warship equipped with a mobile Iron Dome air defense system could be stationed in the Suez Canal region or Red Sea to protect the Suez Canal and Egyptian and Saudi targets against Iranian missiles in any future Shiite-Sunni war scenario. The mobile naval-based Iron Dome system could also be placed on Israeli warships in the Gulf of Aden and Straits of Hormuz to protect many valuable targets in the Sunni region from Iranian missile attacks. The Iron Dome system was developed as a joint American-Israeli project, so I have to wonder if US warships are also being equipped with this same naval-based missile defense system that can be used aboard Israeli warships.

Also, the Israelis are reportedly ready to deploy in 2016 a new laser-based, “Star-Wars”-type of short-range air defense system that can acquire and shoot down projectiles fired at Israeli targets via a laser-based system called “Iron Beam.” (second link). This is very advanced and practical as the laser-based, Iron Beam system never runs out of “kinetic interceptors” to fire at incoming rounds. As long as it has energy supplies, it can go on firing indefinitely at incoming targets. I hope that the US military will also be sharing in this capability, which will be invaluable in protecting personnel, military platforms and facilities from any kind of incoming fire. The second link also mentions the Israeli Arrow II air defense system which can shoot down incoming ballistic missiles fired at Israeli targets. Obviously, this air defense system is designed to shoot down incoming Iranian missiles as Iran as threatened to wipe Israel “off the map.” This long-range interception system can also shield targets in Egypt, Saudi Arabia and Jordan from incoming Iranian missiles if these nations become allies with Israel against the growing Iranian threat.

Finally, even though President Obama’s hostility toward Israel in general and towards Israeli Prime Minister Netanyahu in particular has been often reported, the US Congress is far friendlier to Israeli interests than is the Obama administration. The US Congress just voted to quadruple America’s contribution toward developing Israel’s missile defense systems with even more-advanced capabilities (third link). Undoubtedly, the US Congress is expecting that America’s investment in the developing air defense capabilities of Israel will be shared with the US military branches as the capabilities are perfected.

These developing air defense systems with virtual Star Wars types of capabilities help ensure the safety of Israel, which God pledged in Zechariah 12 that he would guarantee in the latter days (Zechariah 12 uses the term “Judah” to describe the modern Jewish nation called Israel). God often works through humans to accomplish his will, so there is no doubt in my mind that God is an unseen helper in favoring the success of these high-tech developments.