Israel and Egypt Cooperating in Attacks vs. Jihadis in Sinai Region 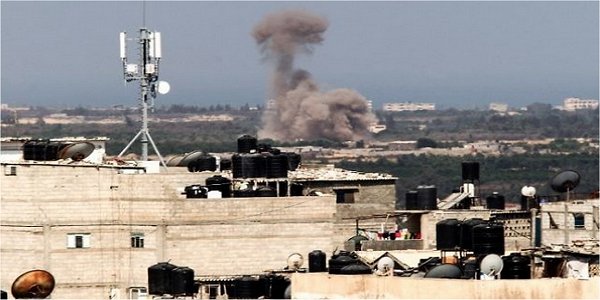 My past posts have followed the growing cooperation between Israel and its Sunni Muslim neighbors in mutually fighting terrorism and to present a common front against Shiite Iran. A new revelation has come to light which shows how deep this cooperation has become. While the first link states that there has been secret military cooperation for some time between Israel and Egypt to fight the Jihadi terrorists based in the Northern Sinai region, the second link and third link openly report that this is the case. Indeed, they report that Israel has flown over 100 airstrikes against the Jihadi terrorists in the Northern Sinai region in support of Egyptian ground forces in recent years.

The Israelis have reportedly covered up their Israeli wing and fuselage insignia on their planes, drones and helicopters used in these operations. Both Israel and Egypt benefit from this arrangement as both of them are more secure if the terrorists in the Sinai region are eliminated. However, the disclosure of their cooperation in the world media does create some public relations difficulties for both of them.

This Israeli-Egyptian military and intelligence cooperation is not a surprise to me and it will not come as a surprise to long-time readers of this blog as I have been documenting this developing cooperation for years in a variety of posts. For new readers of my blog, allow me to state the reasons for my expectations that this Sunni-Israeli alliance would occur. My expectation that this kind of a de facto alliance would develop was based on the Biblical prophecy in Ezekiel 38-39. In listing the members of the Gog-Magog alliance in Ezekiel 38:1-6, it mentions “Persia” will be allied to Russia, China and their allies in the global alliance that will eventually attack all the nations of the modern tribes of Israel and their allies at the end of the latter days. Persia is easily seen as Iran, and Iran is the leader of the Shiite bloc of Islam around the world. Iran also seeks to subjugate the Sunni Arab nations and make them subservient to Iran. Given the rising sectarian violence and open warfare between the Sunni bloc (led by Saudi Arabia, Egypt, Jordan and the United Arab Emirates) and the Shiite bloc (Iran, Syria, Hezbollah, the Houthis in Yemen, etc.) in Iraq, Yemen, Syria, etc., it seemed evident that the Sunni and Shiite blocs would find themselves in separate alliances in the latter days of this age. Since the Egyptians and the Ishmaelites (the Sunni Arab nations) were not listed as being in the latter-day Gog-Magog alliance, it made sense that they would both be in the western alliance dominated by the modern ten tribes of Israel (the USA, the UK, most NATO nations, etc.). Israel is a Mideast nation in the Western alliance so it made sense that Ezekiel 38’s prophecy indicated that the Israelis would become allied to the Sunni governments in Egypt and the Arab world as this age draws deeper into the latter days of our age. That is exactly what is happening. they are being pushed together by one of the oldest and strongest geopolitical motivations in the world, that “the enemy of my enemy is my friend.” Iran’s militarism is pushing the Sunnis and Israelis together. This development further reveals that Ezekiel 38-39 is one of the key biblical prophecies which accurately reveal what God will implement in the latter days among the modern nations of the world.

To obtain more in-depth documentation about the above claims regarding the biblical identities of nations in our modern world, an immense wealth of documented evidence is contained in my books concerning the modern identities of the ten tribes of Israel. Much information is also available in my free articles, The USA in Bible Prophecy, Are We Living in the Biblical Latter Days? and What Ezekiel 38-39 Reveals about a Future World War III. Make no mistake about it. The Bible’s prophecies reveal in advance what will happen in the modern world and in the years ahead of us. So many very specific biblical prophecies have already been fulfilled that we can be confident the remaining latter day prophecies will also be fulfilled as well. The world’s masses will not realize what is happening as most are prophesied to be deceived (Matthew 24:24, II Thessalonians 2:3-11, Revelation 12:9). However, there is no reason why you need to be among the deceived masses. You can know what God is doing and how events will unfold by reading the above articles and also my books about the history and modern locations of the ten tribes of Israel. The ten tribes of Israel were prophesied to be alive and present among the nations in the latter days of our age (Genesis 49, Revelation 7). Those who not realize this fact and who do not know where the ten tribes of Israel are located today cannot possibly understand biblical prophecies about nations and events in the latter days.