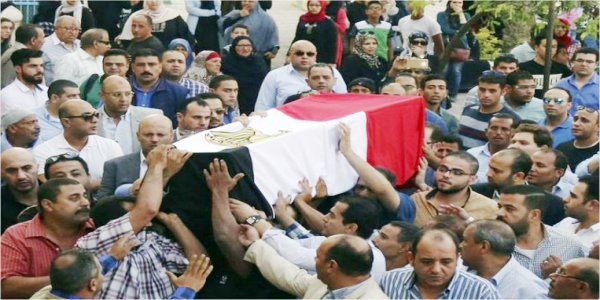 As the war on ISIS and Islamic terrorism is being won in Iraq and Syria and even though ISIS has lost control of Mosul and its claimed capital, Raqqa, the war on terrorism is getting worse in Egypt.

Egypt has been waging a war against terrorists fighting Egyptian security forces in the Sinai Peninsula, but a recent attack by terrorists was particularly bold and damaging. A band of terrorists ambushed an Egyptian convoy that was transporting high-ranking members of Egypt’s elite anti-terrorism force. This ambush occurred not in the Sinai Peninsula, but deep inside Egypt. The first link claims that this attack killed 58 members of the Egyptian military and wounded 14 others. The second link puts the total of casualties somewhat differently but still very high. The terrorists apparently achieved complete surprise, and suffered no casualties of their own. The terrorists are identified as being from the Muslim Brotherhood and/or its armed wing.

I wanted readers to be aware of this attack as it indicates that the war on terrorism is far from over. ISIS terrorists have seized territory in Libya, the Philippines and other locations in North Africa. Their forces will surely seek to escape out of the Mideast where ISIS is being defeated and infiltrate into other nations to carry on their campaign of terrorism. There are several facts that can be determined from this major attack on Egypt’s anti-terrorism force.

A. The completely unexpected nature of this attack means that the terrorists who attacked the Egyptian military convoy must have had a very highly-placed “mole” inside Egypt’s security forces who knew about the routing and schedule of this important convoy. There is no way that the terrorists could have arranged this ambush so well if they did not have very accurate inside information.

B. The murder of so many of Egypt’s anti-terrorism officers will make it harder to suppress the terrorists inside Egypt. That the terrorists could mass a force large enough to perpetrate this attack deep inside Egypt indicates that their members and sympathizers are spread more widely than previously realized. The terrorists who carried out this attack are apparently all still at large.

C. While they have different command structures and agendas, there appears to be deepening cooperation between all the terrorist organizations in the Mideast (ISIS, Muslim Brotherhood, Al Qaeda, Hezbollah, Hamas, etc.). This enables them to pool their resources and information to be more dangerous when they act collectively.

We need to ask this necessary question: Who gains from this latest terrorist attack against Egypt? My opinion is that it is Iran who gains the most. Iran leads the Persian/Shiite bloc of Islam while Saudi Arabia and Egypt lead the Sunni/Arab bloc. The more that Iran can weaken these two major Sunni nations, the easier will be their goal of total domination of the Islamic world. Iran already aids the Houthis inside Yemen to attack the Sunni government there and fight the Saudis as well. Destabilizing Sunni Egypt aids the overall Iranian goals in the Mideast, so it is likely (in my judgment) that Iran is aiding the terrorist groups who are fighting against Sunni governments and seeking to destabilize them from within.

The attack inside Egypt is just one step in the overall struggle between the globe’s competing western and eastern blocs to try and shape the Mideast’s borders and realities on the ground in the post-ISIS world. The Bible prophesied accurately about the makeup and competition between these two global blocs in what the Bible calls the “latter days” of our age. One of the most detailed and thorough latter-day prophecies is found in Ezekiel 38-39. To examine the many details revealed in Bible prophecy about our modern world and its future, please read my article, What Ezekiel 38-39 Reveals about a Future World War III.