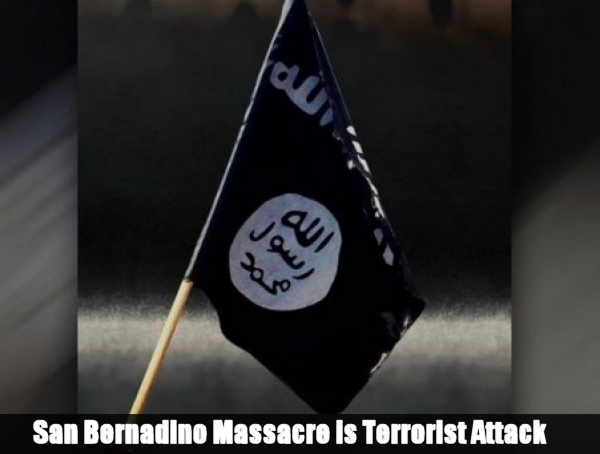 It has finally happened. The mainstream media is now finally admitting what millions of Americans have known to be true ever since we heard that the mass murderers who killed and wounded so many people in San Bernardino, CA had Islamic names. Given that Islamic/ISIS terrorism had hit Russia, Egypt, Lebanon and Paris, France recently, and that ISIS has called on Muslims all over the world to attack westerners, Christians and even other Muslims that don’t support ISIS, it was inevitable that Islamic terrorism would hit the USA. It now has (first link). The two Islamic terrorists who struck at a group of people in San Bernardino were apparently at least as well-armed and prepared for mass mayhem as were the Islamic terrorists who hit several locations in Paris not long ago.

It was predictable that the mass media and especially the Obama administration and other liberals would fall all over themselves trying to semantically deny the obvious fact that the USA had been hit by an attack perpetrated by Islamic/ISIS terrorists. I happened to hear a bit of the Mark Levin radio program when I was in my car and he was playing clips from the mainstream media right after the shooting wherein the media and their “experts” were trying to start a narrative that right-wing militia types were responsible for the mass murders. They SO wanted something like that to be true as they could hype their anti-gun agenda with such a narrative. The media and the liberals finally have had to face the fact that this was an Islamic terrorist attack vs. the USA just like the ones that hit Paris, France. Indeed, the husband-wife team of Islamic terrorists, after they attacked their first location, had apparently gone home for more weaponry and were on their way to perpetrate more attacks somewhere else when, thankfully, law enforcement officers, caught them and took them out. Their home has been describe as a “bomb factory,” and several media sources have wondered how this terrorist couple could afford so many weapons, rounds of ammo, tactical vests, ammo clips and gun-making material on just his salary as a county-government employee. It argues that they had to be funded by others in a larger group of terrorists and they had to be just two parts of a larger terrorist cell. This and other key questions are discussed in the second link. I’m sure the police departments and federal agencies will be combing over every piece of forensic evidence that they find to try and locate any others who were associates of the two slain terrorists. The terrorists’ history included both Saudi and Pakistani connections and the wife in the terrorist twosome had pledged her loyalty to the head of ISIS on the Internet.

Today, I was listening to Sean Hannity on my car radio while running errands and he was blunt in asserting how this act of Islamic terrorism will change the tone of the coming American election to one that focuses more on national security issues. In commenting on the fact that this terrorist couple was making Improvised Explosive Devices (IEDs) in their California home, he warned that this fact “ought to scare the sh*% out of everyone.” I think he is right. How many others were part of the larger Islamic terrorist cell that the two slain terrorists were likely a part of? If there are others “out there,” do they already have IEDs that they will place on American roads to blow up civilian buses, trucks, etc. just like IEDs were used by the Islamic Taliban and other groups against American military personnel in Iraq and Afghanistan? How many other ISIS sympathizers in the USA (and other nations) are being radicalized to become Islamic terrorists in our immediate future? Our world has just gotten a lot more dangerous. The prophecy in II Timothy 3:1 that the latter days would witness “perilous times” on our earth is steadily becoming ever-more true.

There are some questions that I would like to add to the discussion. If two Christians had attacked a Ramadan-related event and killed and wounded this many people, wouldn’t the media and liberals be screaming that it was a “hate crime?” The two Islamic terrorists attacked a Christmas-related office event. Regardless of readers’ views about Christmas, it has long been an identifiable part of modern Christian activities. So why isn’t this attack being labeled as a “hate crime” by Muslims vs. Christians? Also, I’m disturbed by the fact that the unbelievably-immense intelligence and spying efforts by the NSA and other agencies can’t seem to ever identify terrorists and prevent terrorist attacks. The two Islamic terrorists who attacked the Boston Marathon were not identified in the “meta-data” efforts. The Islamic terrorist who shot his fellow US military personnel at Ft. Hood was not identified as a terrorist by any meta-data effort. No metadata efforts helped the French police identify and stop the Islamic terrorists who attacked Paris, France. The list could go on and on. It is time the US government took a hard look at its own intelligence-gathering efforts. The US spy agencies seem to be so focused on gathering the entire “haystack” of unlimited information that is obtainable that they routinely fail to locate the “needles” of dangerous terrorists in those haystacks. Has making everyone take off shoes and belts and discard water bottles at airport gate-checks ever stopped a terrorist attack? Probably not. Nations are spending billions of dollars on intelligence-gathering activities that seem to be of no use in stopping terrorist attacks. Maybe the intelligence-gathering efforts need to have a focused, instead of a pervasive, approach. The French government has now adopted a more focused effort to stop terrorism before it strikes. As part of that effort, France has already shut down three Islamic mosques that were associated with Islamic radicalization efforts and may shut down as many as 160 mosques (third link)!

What are Americans doing about this? They are buying guns…lots of them. The fourth link and fifth links report that on Black Friday, the traditional heavy shopping day after Thanksgiving, Americans set an all-time, daily record for gun-buying demand. Gun shops sent over 185,000 background checks to the FBI for gun purchases on just that one day! Since each such background check can include any number of guns being purchased on a single background check request, Americans likely bought at least a quarter to a third of a million guns on just that one day! That was how high the American gun-demand was before the San Bernardino Islamic terrorist attack. One can only imagine how gun purchases will spike all over America in the wake of this terrorist attack. The fourth link reports that Americans have initiated over 220,000,000 gun background checks since 1998. This must account for at least 300,000,000 guns being bought by American civilians just since 1998. That does not include the number of guns bought and owned by Americans in the decades that led up to 1998. The number of guns owned by Americans must be well nigh incalculable. What is amazing is that there are so few gun shootings, given how many guns are in Americans’ hands. Indeed, a huge percentage of gun deaths in America is caused by gang violence, and no gun-control law will ever stop gang violence or terrorists.

Even some US Sheriffs and Police Chiefs are beginning to call on more American civilians with concealed-carry permits to carry guns on their persons to help prevent or cut short terrorist acts like what occurred in San Bernardino. The sixth link, seventh link and eighth link report that Sheriffs in Arizona and New York and the Police Chief of Detroit, Michigan have called on law-abiding citizens to start carrying their guns when they go somewhere. The calls for gun control by Obama, Hillary Clinton and their “amen corner” in the liberal media look quite foolish now that the San Bernardino massacre is known to be an act of Islamic terrorism. No gun-control law will ever stop such attacks from happening. However, armed citizens can cut such attacks short and stop the casualties from rising if they shoot the terrorists as soon as they begin their attack. I think the American people have already figured that out–that is why gun sales are off the charts.