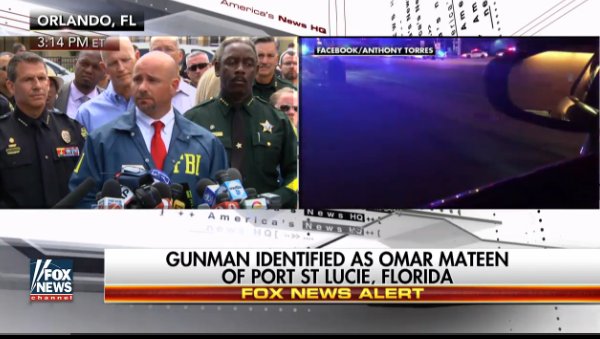 Just days ago, I wrote a post warning that the FBI had a list of 1,000 potential Islamic terrorists within the USA who had known or suspected ties to ISIS, the terrorist “state” in the Mideast. That warning was timely. By now, I’m sure all readers have heard about the major terrorist attack carried out today in Orlando, Florida. It was perpetrated by an Islamic terrorist who pledged his loyalty to the leader of ISIS in a 911 call just before he carried out his deadly act. This was the largest Islamic terrorist act on US soil since the 9/11 attack. The first link gives many of the details about the attack, including the shocking total of 50 deaths and approximately 53 wounded by a single attacker. Initial reports were vague on the Islamic nature of this attacker, but subsequent reports have left no doubt that this was an act of Islamic terrorism, inspired by ISIS. Americans have read about the large-scale Islamic terrorist attacks in Paris and Brussels recently, but perhaps we Americans have grown complacent, again thinking, “it couldn’t happen here.” We now know it can happen here…again. More seriously, if it happened in Florida today, it can happen anywhere else in America in the future.

Indeed, the second link reports that ISIS specifically threatened a terrorist attack on US soil within the state of Florida prior to this attack in Orlando. An Islamic shooter declaring his allegiance to the head of ISIS afterwards kills a very large number of people in Orlando, Florida after ISIS made its warning. I don’t think the connection is too hard to make. It has also come out in the major media that the Islamic shooter also had a personal connection to an Al Qaeda suicide bomber from Syria (third link), and that his father from Afghanistan has ties to the Taliban and is even reportedly running for office in Afghanistan’s election (fourth link).

The fourth link (and TV media stories I’ve seen today) also report that the killer had previously been on the FBI’s watch list, but was dropped from it, apparently after 2014. This is sobering. This means that today’s Islamic terrorist must have been judged by the FBI to be less likely a threat than at least 1,000 other Muslims inside America who are either affiliated with ISIS or in some stage of being radicalized by ISIS or some other Islamic terrorist group. Do you find it as troubling as I do that there may be at least 1,000 other potential terrorists in the US who are considered by the FBI to be more of a risk than this Islamic terrorist who struck today in Orlando? This shooter was known to have met with a radicalized person who became an Al Qaeda suicide bomber and that his father is cozy with the Taliban? And yet he was dropped from the “watch list?” How bad do your terrorist characteristics have to be to be on the FBI’s terrorist “watch list?” It may be that the FBI is running out of personnel to monitor the growing number of potential terrorists already within the USA. I had an even more sobering thought as I watched the media reports today about this terrorist attack. What if instead of one Islamic terrorist perpetrating a massacre at one site, what if dozens or scores of such terrorists had struck simultaneously all over the USA at the same time? What if such a horrific thing happens in the future?

This attack today had a double religious significance, from a calendar perspective. It happened during Ramadan, the most important month on the Islamic calendar. It also happened during Shavuot/the Feast of Weeks, a Jewish/Torah Holy Day commanded in Leviticus 23. Was this just a coincidence?

This terrible terrorist act occurred during the US presidential election campaign, so it will inevitably be an issue in the campaign. TV media stories have already cited the tweets and statements from both Donald Trump and Hillary Clinton as well as Barack Obama re: the attack (last link). As usual, President Obama simply couldn’t bring himself to say the words, “Islamic terrorism,” in talking about an obvious act of Islamic terrorism. Obama has never seemed to be very serious about fighting Islamic terrorism. Remember when he dismissed ISIS as only a “B team” entity? If you can’t bring yourself to identify the real enemy, you have no hope of ever defeating it. Obama is such a “PC” ideologue that I doubt he will ever be able to have the words “Islamic terrorism” in his vocabulary. Hillary Clinton isn’t much different. I saw a segment on a TV news report in which Ms. Clinton tried to twist this horrible terrorist attack as a reason for more gun control actions. Right… as if terrorists will ever care about gun control laws when they commit such heinous acts. She doesn’t “get it.” Donald Trump’s comments and past statements shows that he definitely does “get it.” He has called for a common sense temporary halt to Islamic immigration into the USA until a much better vetting program for such immigrants is in place to make sure terrorists don’t come in undetected along with non-threatening Islamic immigrants. Mr. Trump used more colorful language in expressing this thought, but that is the substance of what he called for. What happened today can only tend to help Mr. Trump in the presidential campaign, in my view, as his warnings now look quite timely and prescient. ISIS has threatened to embed their terrorists among Islamic immigrants wherever they go in the world, so a tough vetting process for Islamic immigrants seems obviously necessary to thwart such ISIS efforts at infiltrating their agents into the USA.

I’ve periodically cited the accuracy of the Apostle Paul’s warning in II Timothy 3:1 that “perilous times” will characterize the latter days of our age. His warning is proving more and more accurate, on a global scale, as times go by. I fear that worse attacks than today’s lie in our future.